Is SINA Corp (SINA) A Good Stock To Buy?

The 700+ hedge funds and money managers tracked by Insider Monkey have already compiled and submitted their 13F filings for the fourth quarter, which unveil their equity positions as of December 31. We went through these filings, fixed typos and other more significant errors and identified the changes in hedge fund positions. Our extensive review of these public filings is finally over, so this article is set to reveal the smart money sentiment towards SINA Corp (NASDAQ:SINA).

SINA Corp (NASDAQ:SINA) shareholders have witnessed a decrease in hedge fund interest of late. SINA was in 21 hedge funds’ portfolios at the end of the fourth quarter of 2018. There were 24 hedge funds in our database with SINA positions at the end of the previous quarter. Our calculations also showed that SINA isn’t among the 30 most popular stocks among hedge funds.

What does the smart money think about SINA Corp (NASDAQ:SINA)? 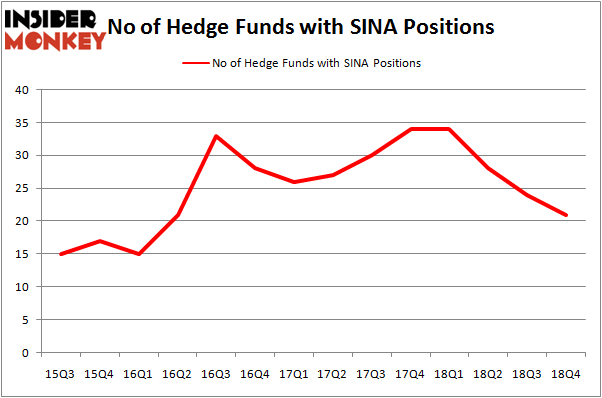 The largest stake in SINA Corp (NASDAQ:SINA) was held by Platinum Asset Management, which reported holding $190 million worth of stock at the end of September. It was followed by D E Shaw with a $63.5 million position. Other investors bullish on the company included Tairen Capital, HBK Investments, and Renaissance Technologies.

Judging by the fact that SINA Corp (NASDAQ:SINA) has faced a decline in interest from the smart money, it’s safe to say that there exists a select few hedgies that elected to cut their positions entirely in the third quarter. It’s worth mentioning that Thomas Steyer’s Farallon Capital said goodbye to the largest investment of all the hedgies watched by Insider Monkey, worth an estimated $78.1 million in stock. Panayotis Takis Sparaggis’s fund, Alkeon Capital Management, also dropped its stock, about $54.7 million worth. These transactions are intriguing to say the least, as aggregate hedge fund interest was cut by 3 funds in the third quarter.

As you can see these stocks had an average of 19.5 hedge funds with bullish positions and the average amount invested in these stocks was $198 million. That figure was $440 million in SINA’s case. Nuance Communications Inc. (NASDAQ:NUAN) is the most popular stock in this table. On the other hand DCP Midstream LP (NYSE:DCP) is the least popular one with only 5 bullish hedge fund positions. SINA Corp (NASDAQ:SINA) is not the most popular stock in this group but hedge fund interest is still above average. Our calculations showed that top 15 most popular stocks) among hedge funds returned 24.2% through April 22nd and outperformed the S&P 500 ETF (SPY) by more than 7 percentage points. Hedge funds were also right about betting on SINA, though not to the same extent, as the stock returned 20.8% and outperformed the market as well.