Is SeaWorld Entertainment Inc (SEAS) A Good Stock To Buy?

Insider Monkey has processed numerous 13F filings of hedge funds and successful value investors to create an extensive database of hedge fund holdings. The 13F filings show the hedge funds’ and successful investors’ positions as of the end of the second quarter. You can find articles about an individual hedge fund’s trades on numerous financial news websites. However, in this article we will take a look at their collective moves over the last 5 years and analyze what the smart money thinks of SeaWorld Entertainment Inc (NYSE:SEAS) based on that data and determine whether they were really smart about the stock.

At Insider Monkey we scour multiple sources to uncover the next great investment idea. For example, legal marijuana is one of the fastest growing industries right now, so we are checking out stock pitches like “the Starbucks of cannabis” to identify the next tenbagger. We go through lists like the 10 most profitable companies in the world to pick the best large-cap stocks to buy. Even though we recommend positions in only a tiny fraction of the companies we analyze, we check out as many stocks as we can. We read hedge fund investor letters and listen to stock pitches at hedge fund conferences. You can subscribe to our free daily newsletter on our website to get excerpts of these letters in your inbox. Now let’s check out the new hedge fund action encompassing SeaWorld Entertainment Inc (NYSE:SEAS).

What does smart money think about SeaWorld Entertainment Inc (NYSE:SEAS)?

At the end of the second quarter, a total of 27 of the hedge funds tracked by Insider Monkey were bullish on this stock, a change of 0% from one quarter earlier. On the other hand, there were a total of 32 hedge funds with a bullish position in SEAS a year ago. With hedge funds’ sentiment swirling, there exists a select group of key hedge fund managers who were adding to their stakes meaningfully (or already accumulated large positions). 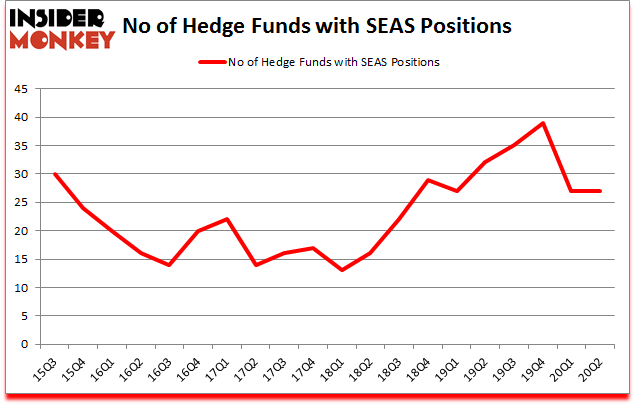 More specifically, Hill Path Capital was the largest shareholder of SeaWorld Entertainment Inc (NYSE:SEAS), with a stake worth $402.9 million reported as of the end of September. Trailing Hill Path Capital was HG Vora Capital Management, which amassed a stake valued at $85.2 million. Candlestick Capital Management, Long Pond Capital, and Renaissance Technologies were also very fond of the stock, becoming one of the largest hedge fund holders of the company. In terms of the portfolio weights assigned to each position Hill Path Capital allocated the biggest weight to SeaWorld Entertainment Inc (NYSE:SEAS), around 93.36% of its 13F portfolio. HG Vora Capital Management is also relatively very bullish on the stock, designating 7.66 percent of its 13F equity portfolio to SEAS.

Since SeaWorld Entertainment Inc (NYSE:SEAS) has faced bearish sentiment from the entirety of the hedge funds we track, we can see that there exists a select few hedgies that slashed their entire stakes last quarter. Interestingly, Jeffrey Jacobowitz’s Simcoe Capital Management dumped the biggest investment of all the hedgies followed by Insider Monkey, comprising an estimated $13.1 million in stock. Noah Levy and Eugene Dozortsev’s fund, Newtyn Management, also sold off its stock, about $3.9 million worth. These bearish behaviors are interesting, as total hedge fund interest stayed the same (this is a bearish signal in our experience).

As you can see these stocks had an average of 15.4 hedge funds with bullish positions and the average amount invested in these stocks was $150 million. That figure was $677 million in SEAS’s case. MicroStrategy Incorporated (NASDAQ:MSTR) is the most popular stock in this table. On the other hand Aphria Inc. (NASDAQ:APHA) is the least popular one with only 9 bullish hedge fund positions. Compared to these stocks SeaWorld Entertainment Inc (NYSE:SEAS) is more popular among hedge funds. Our overall hedge fund sentiment score for SEAS is 75.8. Stocks with higher number of hedge fund positions relative to other stocks as well as relative to their historical range receive a higher sentiment score. Our calculations showed that top 10 most popular stocks among hedge funds returned 41.4% in 2019 and outperformed the S&P 500 ETF (SPY) by 10.1 percentage points. These stocks returned 21.3% in 2020 through September 25th but still managed to beat the market by 17.7 percentage points. Hedge funds were also right about betting on SEAS as the stock returned 38.4% since the end of June and outperformed the market by an even larger margin. Hedge funds were clearly right about piling into this stock relative to other stocks with similar market capitalizations.

Related Insider Monkey Articles
Top 10 Logistics Companies in the World25 Countries with the Most Debt Per Capita and Debt to GDP: 2020 RankingsIs GlaxoSmithKline plc (GSK) A Good Stock To Buy?
Qualcomm (QCOM) Has Risen 49% in Last One Year, Outperforms MarketAlibaba Group Holding (BABA) Has Risen 63% in Last One Year, Outperforms Market...Brookfield Asset Management (BAM) Has Fallen 10% in Last One Year, Underperforms...
Monthly Newsletter Strategy
Download a free copy of our newsletter and see the details inside!
Hedge Fund Resource Center
Billionaire Hedge Funds