Many investors, including Paul Tudor Jones or Stan Druckenmiller, have been saying before the Q4 market crash that the stock market is overvalued due to a low interest rate environment that leads to companies swapping their equity for debt and focusing mostly on short-term performance such as beating the quarterly earnings estimates. In the first half of 2019, most investors recovered all of their Q4 losses as sentiment shifted and optimism dominated the US China trade negotiations. Nevertheless, many of the stocks that delivered strong returns in the first half still sport strong fundamentals and their gains were more related to the general market sentiment rather than their individual performance and hedge funds kept their bullish stance. In this article we will find out how hedge fund sentiment to Santander Consumer USA Holdings Inc (NYSE:SC) changed recently.

Santander Consumer USA Holdings Inc (NYSE:SC) was in 26 hedge funds’ portfolios at the end of the second quarter of 2019. SC has seen an increase in support from the world’s most elite money managers lately. There were 22 hedge funds in our database with SC positions at the end of the previous quarter. Our calculations also showed that SC isn’t among the 30 most popular stocks among hedge funds (see the video below).

What have hedge funds been doing with Santander Consumer USA Holdings Inc (NYSE:SC)? 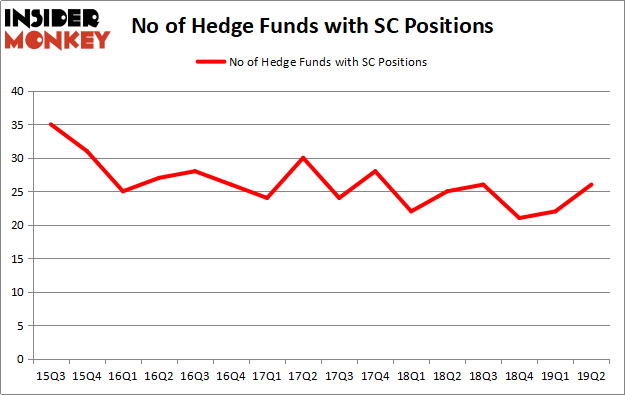 More specifically, Canyon Capital Advisors was the largest shareholder of Santander Consumer USA Holdings Inc (NYSE:SC), with a stake worth $232.1 million reported as of the end of March. Trailing Canyon Capital Advisors was Windacre Partnership, which amassed a stake valued at $218.2 million. Samlyn Capital, Arrowstreet Capital, and Azora Capital were also very fond of the stock, giving the stock large weights in their portfolios.

As you can see these stocks had an average of 20.5 hedge funds with bullish positions and the average amount invested in these stocks was $313 million. That figure was $837 million in SC’s case. Tapestry, Inc. (NYSE:TPR) is the most popular stock in this table. On the other hand Advanced Semiconductor Engineering (NYSE:ASX) is the least popular one with only 8 bullish hedge fund positions. Santander Consumer USA Holdings Inc (NYSE:SC) is not the most popular stock in this group but hedge fund interest is still above average. Our calculations showed that top 20 most popular stocks among hedge funds returned 24.4% in 2019 through September 30th and outperformed the S&P 500 ETF (SPY) by 4 percentage points. Hedge funds were also right about betting on SC as the stock returned 7.4% during the third quarter and outperformed the market. Hedge funds were rewarded for their relative bullishness.