A whopping number of 13F filings filed with U.S. Securities and Exchange Commission has been processed by Insider Monkey so that individual investors can look at the overall hedge fund sentiment towards the stocks included in their watchlists. These freshly-submitted public filings disclose money managers’ equity positions as of the end of the three-month period that ended June 28, so let’s proceed with the discussion of the hedge fund sentiment on Reliance Steel & Aluminum Co. (NYSE:RS).

Is Reliance Steel & Aluminum Co. (NYSE:RS) a healthy stock for your portfolio? Investors who are in the know are getting less bullish. The number of bullish hedge fund positions were cut by 4 in recent months. Our calculations also showed that RS isn’t among the 30 most popular stocks among hedge funds (see the video below).

To the average investor there are tons of tools shareholders employ to evaluate publicly traded companies. Two of the most innovative tools are hedge fund and insider trading moves. Our researchers have shown that, historically, those who follow the best picks of the top hedge fund managers can beat the S&P 500 by a significant amount (see the details here).

What have hedge funds been doing with Reliance Steel & Aluminum Co. (NYSE:RS)? 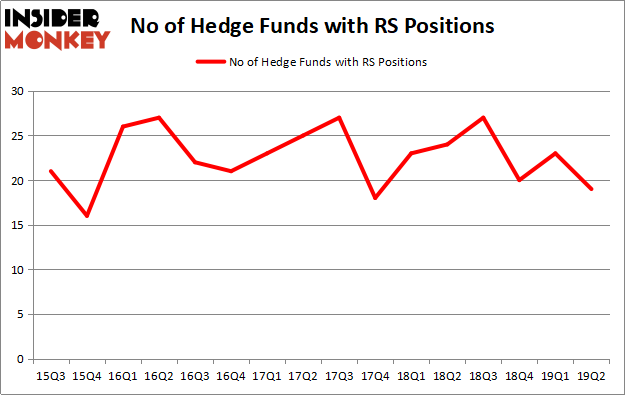 Due to the fact that Reliance Steel & Aluminum Co. (NYSE:RS) has experienced falling interest from the smart money, it’s easy to see that there is a sect of hedgies who sold off their full holdings by the end of the second quarter. It’s worth mentioning that Paul Tudor Jones’s Tudor Investment Corp said goodbye to the biggest stake of the 750 funds monitored by Insider Monkey, worth an estimated $2 million in stock. Sara Nainzadeh’s fund, Centenus Global Management, also dumped its stock, about $1.4 million worth. These moves are important to note, as aggregate hedge fund interest was cut by 4 funds by the end of the second quarter.

As you can see these stocks had an average of 23.5 hedge funds with bullish positions and the average amount invested in these stocks was $713 million. That figure was $288 million in RS’s case. Newell Brands Inc. (NASDAQ:NWL) is the most popular stock in this table. On the other hand Nektar Therapeutics (NASDAQ:NKTR) is the least popular one with only 19 bullish hedge fund positions. Compared to these stocks Reliance Steel & Aluminum Co. (NYSE:RS) is even less popular than NKTR. Hedge funds clearly dropped the ball on RS as the stock delivered strong returns, though hedge funds’ consensus picks still generated respectable returns. Our calculations showed that top 20 most popular stocks among hedge funds returned 24.4% in 2019 through September 30th and outperformed the S&P 500 ETF (SPY) by 4 percentage points. A small number of hedge funds were also right about betting on RS as the stock returned 5.9% during the third quarter and outperformed the market by an even larger margin.