Is Proto Labs Inc (PRLB) A Good Stock To Buy?

Like everyone else, elite investors make mistakes. Some of their top consensus picks, such as Amazon, Facebook and Alibaba, have not done well in Q4 due to various reasons. Nevertheless, the data show elite investors’ consensus picks have done well on average over the long-term. The top 20 stocks among hedge funds beat the S&P 500 Index ETF by 4 percentage points so far this year. Because their consensus picks have done well, we pay attention to what elite funds think before doing extensive research on a stock. In this article, we take a closer look at Proto Labs Inc (NYSE:PRLB) from the perspective of those elite funds.

Proto Labs Inc (NYSE:PRLB) has seen a decrease in activity from the world’s largest hedge funds in recent months. Our calculations also showed that PRLB isn’t among the 30 most popular stocks among hedge funds (view video below).

What have hedge funds been doing with Proto Labs Inc (NYSE:PRLB)?

At the end of the second quarter, a total of 9 of the hedge funds tracked by Insider Monkey were long this stock, a change of -18% from the first quarter of 2019. By comparison, 8 hedge funds held shares or bullish call options in PRLB a year ago. With hedgies’ positions undergoing their usual ebb and flow, there exists an “upper tier” of notable hedge fund managers who were adding to their stakes considerably (or already accumulated large positions). 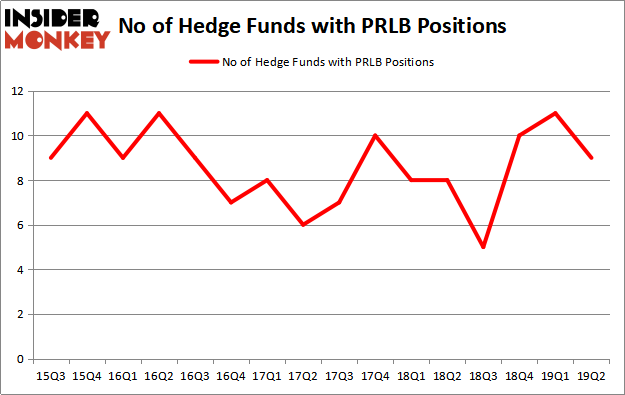 When looking at the institutional investors followed by Insider Monkey, Israel Englander’s Millennium Management has the most valuable position in Proto Labs Inc (NYSE:PRLB), worth close to $7.1 million, accounting for less than 0.1%% of its total 13F portfolio. Sitting at the No. 2 spot is GLG Partners, led by Noam Gottesman, holding a $6.1 million position; less than 0.1%% of its 13F portfolio is allocated to the company. Some other professional money managers with similar optimism comprise D. E. Shaw’s D E Shaw, Chuck Royce’s Royce & Associates and Ken Griffin’s Citadel Investment Group.

Seeing as Proto Labs Inc (NYSE:PRLB) has witnessed falling interest from the entirety of the hedge funds we track, logic holds that there was a specific group of money managers that elected to cut their entire stakes by the end of the second quarter. It’s worth mentioning that Renaissance Technologies cut the biggest stake of all the hedgies followed by Insider Monkey, comprising close to $5.1 million in stock. Peter Rathjens, Bruce Clarke and John Campbell’s fund, Arrowstreet Capital, also cut its stock, about $0.8 million worth. These transactions are important to note, as total hedge fund interest fell by 2 funds by the end of the second quarter.

As you can see these stocks had an average of 14.75 hedge funds with bullish positions and the average amount invested in these stocks was $133 million. That figure was $23 million in PRLB’s case. Rattler Midstream LP (NASDAQ:RTLR) is the most popular stock in this table. On the other hand Manchester United PLC (NYSE:MANU) is the least popular one with only 10 bullish hedge fund positions. Compared to these stocks Proto Labs Inc (NYSE:PRLB) is even less popular than MANU. Hedge funds dodged a bullet by taking a bearish stance towards PRLB. Our calculations showed that the top 20 most popular hedge fund stocks returned 24.4% in 2019 through September 30th and outperformed the S&P 500 ETF (SPY) by 4 percentage points. Unfortunately PRLB wasn’t nearly as popular as these 20 stocks (hedge fund sentiment was very bearish); PRLB investors were disappointed as the stock returned -12% during the third quarter and underperformed the market. If you are interested in investing in large cap stocks with huge upside potential, you should check out the top 20 most popular stocks among hedge funds as many of these stocks already outperformed the market so far in 2019.