Is Primo Water Corporation (PRMW) A Good Stock To Buy?

Primo Water Corporation (NASDAQ:PRMW) investors should pay attention to a decrease in hedge fund sentiment recently. Our calculations also showed that PRMW isn’t among the 30 most popular stocks among hedge funds (see the video below).

What have hedge funds been doing with Primo Water Corporation (NASDAQ:PRMW)? 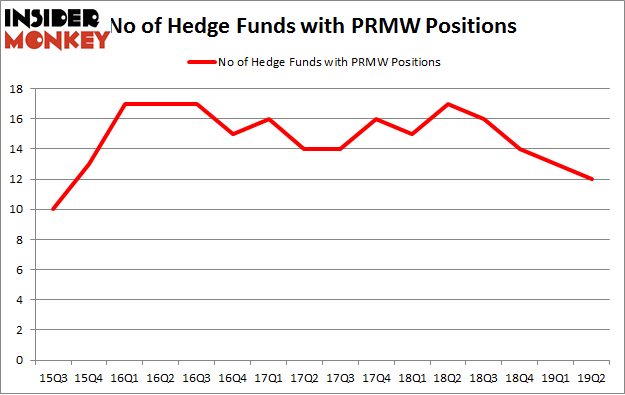 According to Insider Monkey’s hedge fund database, Ted White and Christopher Kiper’s Legion Partners Asset Management has the number one position in Primo Water Corporation (NASDAQ:PRMW), worth close to $39 million, corresponding to 9.6% of its total 13F portfolio. The second most bullish fund manager is Charles Akre of Akre Capital Management, with a $37.5 million position; the fund has 0.4% of its 13F portfolio invested in the stock. Other professional money managers that hold long positions consist of Renaissance Technologies, Ken Grossman and Glen Schneider’s SG Capital Management and Chuck Royce’s Royce & Associates.

Since Primo Water Corporation (NASDAQ:PRMW) has faced a decline in interest from the aggregate hedge fund industry, it’s easy to see that there were a few hedge funds that decided to sell off their entire stakes heading into Q3. Intriguingly, Richard Driehaus’s Driehaus Capital said goodbye to the largest investment of all the hedgies followed by Insider Monkey, valued at about $8.5 million in stock, and Joseph A. Jolson’s Harvest Capital Strategies was right behind this move, as the fund dropped about $1.6 million worth. These moves are important to note, as total hedge fund interest dropped by 1 funds heading into Q3.

As you can see these stocks had an average of 13.5 hedge funds with bullish positions and the average amount invested in these stocks was $80 million. That figure was $109 million in PRMW’s case. Akero Therapeutics, Inc. (NASDAQ:AKRO) is the most popular stock in this table. On the other hand Dorian LPG Ltd (NYSE:LPG) is the least popular one with only 10 bullish hedge fund positions. Primo Water Corporation (NASDAQ:PRMW) is not the least popular stock in this group but hedge fund interest is still below average. This is a slightly negative signal and we’d rather spend our time researching stocks that hedge funds are piling on. Our calculations showed that top 20 most popular stocks among hedge funds returned 24.4% in 2019 through September 30th and outperformed the S&P 500 ETF (SPY) by 4 percentage points. Unfortunately PRMW wasn’t nearly as popular as these 20 stocks (hedge fund sentiment was quite bearish); PRMW investors were disappointed as the stock returned -0.2% during the third quarter and underperformed the market. If you are interested in investing in large cap stocks with huge upside potential, you should check out the top 20 most popular stocks among hedge funds as many of these stocks already outperformed the market so far in 2019.