Before we spend days researching a stock idea we like to take a look at how hedge funds and billionaire investors recently traded that stock. S&P 500 Index ETF (SPY) lost 8.7% through October 26th. Forty percent of the S&P 500 constituents were down more than 10%. The average return of a randomly picked stock in the index is -9.5%. This means you (or a monkey throwing a dart) have less than an even chance of beating the market by randomly picking a stock. On the other hand, the top 25 most popular S&P 500 stocks among hedge funds had an average loss of 8.8%. In this article, we will take a look at what hedge funds think about PagSeguro Digital Ltd. (NYSE:PAGS).

There was net selling of PagSeguro Digital Ltd. (NYSE:PAGS) among hedge funds during Q3, with the number of shareholders falling to 39 from 48. However, the stock remains extremely popular among the smart money for its size, with the hedge funds tracked by Insider Monkey owning over 18% of the company’s shares. Some of those shares are owned by Amit Nitin Doshi‘s Harbor Spring Capital, which opened a PAGS position in Q2 and also discussed the stock in its Q2 investor letter. The fund sees the Brazilian payments processor as potentially being one of the fastest growing companies in the world, with its research suggesting that major retailers have started to approach the company, which has just 3% core market share, about its payment solutions.

In the 21st century investor’s toolkit there are several methods stock market investors use to size up their stock investments. A duo of the most under-the-radar methods are hedge fund and insider trading signals. We have shown that, historically, those who follow the top picks of the top money managers can outpace the S&P 500 by a very impressive margin (see the details here).

At the end of the third quarter, a total of 39 of the hedge funds tracked by Insider Monkey were bullish on this stock, a 19% fall from the second quarter of 2018. Below, you can check out the change in hedge fund sentiment towards PAGS over the last 7 quarters. So, let’s see which hedge funds were among the top holders of the stock and which hedge funds were making big moves. 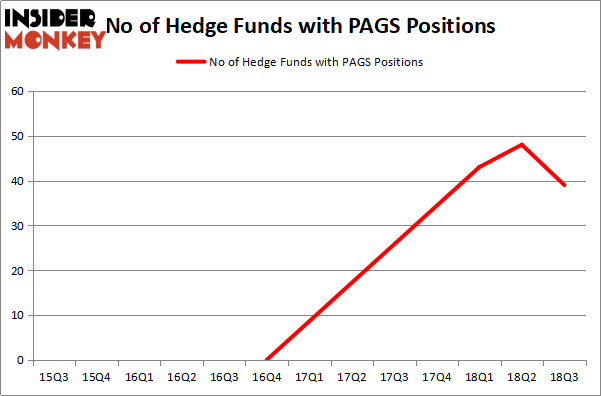 Seeing as PagSeguro Digital Ltd. (NYSE:PAGS) has faced declining sentiment from hedge fund managers, logic holds that there is a sect of hedgies who sold off their full holdings heading into Q3. At the top of the heap, Stephen Mandel’s Lone Pine Capital cut the largest position of the 700 funds monitored by Insider Monkey, totaling about $88.5 million in call options, and Gabriel Plotkin’s Melvin Capital Management was right behind this move, as the fund cut about $83.8 million worth. These moves are intriguing to say the least, as total hedge fund interest fell by 9 funds heading into Q3.

As you can see these stocks had an average of 19 hedge funds with bullish positions and the average amount invested in these stocks was $373 million. That figure was $1.58 billion in PAGS’s case. RPM International Inc. (NYSE:RPM) is the most popular stock in this table. On the other hand Grupo Aval Acciones y Valores S.A. (NYSE:AVAL) is the least popular one with only 6 bullish hedge fund positions. Compared to these stocks PagSeguro Digital Ltd. (NYSE:PAGS) is more popular among hedge funds. Considering that hedge funds are fond of this stock in relation to its market cap peers, it may be a good idea to analyze it in detail and potentially include it in your portfolio.