Is Ormat Technologies, Inc. (ORA) A Good Stock To Buy ?

Hedge funds are not perfect. They have their bad picks just like everyone else. Facebook, a stock hedge funds have loved dearly, lost nearly 40% of its value at one point in 2018. Although hedge funds are not perfect, their consensus picks do deliver solid returns, however. Our data show the top 20 S&P 500 stocks among hedge funds beat the S&P 500 Index by 4 percentage points so far in 2019. Because hedge funds have a lot of resources and their consensus picks do well, we pay attention to what they think. In this article, we analyze what the elite funds think of Ormat Technologies, Inc. (NYSE:ORA).

Ormat Technologies, Inc. (NYSE:ORA) shares haven’t seen a lot of action during the second quarter. Overall, hedge fund sentiment was unchanged. The stock was in 9 hedge funds’ portfolios at the end of the second quarter of 2019. The level and the change in hedge fund popularity aren’t the only variables you need to analyze to decipher hedge funds’ perspectives. A stock may witness a boost in popularity but it may still be less popular than similarly priced stocks. That’s why at the end of this article we will examine companies such as Legg Mason, Inc. (NYSE:LM), Vermilion Energy Inc (NYSE:VET), and Cabot Microelectronics Corporation (NASDAQ:CCMP) to gather more data points. Our calculations also showed that ORA isn’t among the 30 most popular stocks among hedge funds (view the video below).

Unlike former hedge manager, Dr. Steve Sjuggerud, who is convinced Dow will soar past 40000, our long-short investment strategy doesn’t rely on bull markets to deliver double digit returns. We only rely on hedge fund buy/sell signals. We’re going to take a look at the fresh hedge fund action regarding Ormat Technologies, Inc. (NYSE:ORA).

What have hedge funds been doing with Ormat Technologies, Inc. (NYSE:ORA)?

At the end of the second quarter, a total of 9 of the hedge funds tracked by Insider Monkey were bullish on this stock, a change of 0% from the previous quarter. The graph below displays the number of hedge funds with bullish position in ORA over the last 16 quarters. With hedge funds’ sentiment swirling, there exists an “upper tier” of noteworthy hedge fund managers who were upping their holdings considerably (or already accumulated large positions). 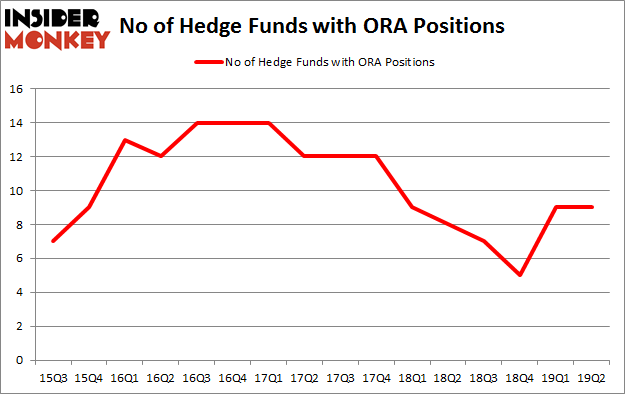 Since Ormat Technologies, Inc. (NYSE:ORA) has faced bearish sentiment from the entirety of the hedge funds we track, it’s safe to say that there lies a certain “tier” of money managers that decided to sell off their full holdings heading into Q3. At the top of the heap, Ken Griffin’s Citadel Investment Group sold off the largest investment of all the hedgies watched by Insider Monkey, worth close to $0.4 million in stock, and Gavin Saitowitz and Cisco J. del Valle’s Springbok Capital was right behind this move, as the fund dropped about $0 million worth. These bearish behaviors are interesting, as aggregate hedge fund interest stayed the same (this is a bearish signal in our experience).

As you can see these stocks had an average of 13.75 hedge funds with bullish positions and the average amount invested in these stocks was $220 million. That figure was $169 million in ORA’s case. Legg Mason, Inc. (NYSE:LM) is the most popular stock in this table. On the other hand Vermilion Energy Inc (NYSE:VET) is the least popular one with only 7 bullish hedge fund positions. Ormat Technologies, Inc. (NYSE:ORA) is not the least popular stock in this group but hedge fund interest is still below average. Our calculations showed that top 20 most popular stocks among hedge funds returned 24.4% in 2019 through September 30th and outperformed the S&P 500 ETF (SPY) by 4 percentage points. A small number of hedge funds were also right about betting on ORA as the stock returned 17.4% during the same time frame and outperformed the market by an even larger margin.