Out of thousands of stocks that are currently traded on the market, it is difficult to identify those that will really generate strong returns. Hedge funds and institutional investors spend millions of dollars on analysts with MBAs and PhDs, who are industry experts and well connected to other industry and media insiders on top of that. Individual investors can piggyback the hedge funds employing these talents and can benefit from their vast resources and knowledge in that way. We analyze quarterly 13F filings of nearly 750 hedge funds and, by looking at the smart money sentiment that surrounds a stock, we can determine whether it has the potential to beat the market over the long-term. Therefore, let’s take a closer look at what smart money thinks about Orchid Island Capital, Inc. (NYSE:ORC).

Orchid Island Capital, Inc. (NYSE:ORC) investors should pay attention to an increase in activity from the world’s largest hedge funds lately. Our calculations also showed that ORC isn’t among the 30 most popular stocks among hedge funds (see the video below).

To most shareholders, hedge funds are seen as unimportant, old investment tools of yesteryear. While there are more than 8000 funds in operation today, We hone in on the upper echelon of this group, approximately 750 funds. These money managers watch over the lion’s share of the hedge fund industry’s total capital, and by observing their inimitable stock picks, Insider Monkey has spotted a number of investment strategies that have historically defeated the broader indices. Insider Monkey’s flagship hedge fund strategy outperformed the S&P 500 index by around 5 percentage points a year since its inception in May 2014. We were able to generate large returns even by identifying short candidates. Our portfolio of short stocks lost 25.7% since February 2017 (through September 30th) even though the market was up more than 33% during the same period. We just shared a list of 10 short targets in our latest quarterly update .

In addition to following the biggest hedge funds for investment ideas, we also share stock pitches from conferences, investor letters and other sources  like this one where the fund manager is talking about two under the radar 1000% return potential stocks: first one in internet infrastructure and the second in the heart of advertising market. We use hedge fund buy/sell signals to determine whether to conduct in-depth analysis of these stock ideas which take days. Let’s take a glance at the fresh hedge fund action encompassing Orchid Island Capital, Inc. (NYSE:ORC). 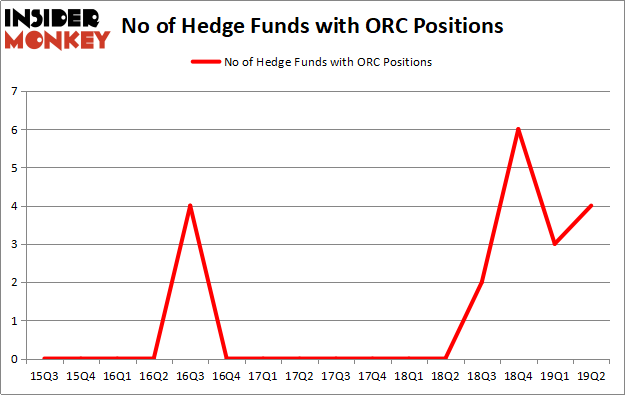 Of the funds tracked by Insider Monkey, Renaissance Technologies has the number one position in Orchid Island Capital, Inc. (NYSE:ORC), worth close to $7.5 million, accounting for less than 0.1%% of its total 13F portfolio. On Renaissance Technologies’s heels is Israel Englander of Millennium Management, with a $0.4 million position; the fund has less than 0.1%% of its 13F portfolio invested in the stock. Remaining professional money managers that are bullish comprise Ken Griffin’s Citadel Investment Group, D. E. Shaw’s D E Shaw and Matthew Hulsizer’s PEAK6 Capital Management.

With a general bullishness amongst the heavyweights, some big names have been driving this bullishness. D E Shaw, managed by D. E. Shaw, created the most outsized position in Orchid Island Capital, Inc. (NYSE:ORC). D E Shaw had $0.1 million invested in the company at the end of the quarter.

As you can see these stocks had an average of 9.25 hedge funds with bullish positions and the average amount invested in these stocks was $50 million. That figure was $8 million in ORC’s case. Accuray Incorporated (NASDAQ:ARAY) is the most popular stock in this table. On the other hand Lawson Products, Inc. (NASDAQ:LAWS) is the least popular one with only 5 bullish hedge fund positions. Compared to these stocks Orchid Island Capital, Inc. (NYSE:ORC) is even less popular than LAWS. Hedge funds dodged a bullet by taking a bearish stance towards ORC. Our calculations showed that the top 20 most popular hedge fund stocks returned 24.4% in 2019 through September 30th and outperformed the S&P 500 ETF (SPY) by 4 percentage points. Unfortunately ORC wasn’t nearly as popular as these 20 stocks (hedge fund sentiment was very bearish); ORC investors were disappointed as the stock returned -6% during the third quarter and underperformed the market. If you are interested in investing in large cap stocks with huge upside potential, you should check out the top 20 most popular stocks among hedge funds as many of these stocks already outperformed the market so far in 2019.