Is Newfield Exploration Co. (NFX) A Good Stock To Buy?

Hedge funds and large money managers usually invest with a focus on the long-term horizon and, therefore, short-lived dips on the charts, usually don’t make them change their opinion towards a company. This time it may be different. During the first 6 weeks of the fourth quarter we observed increased volatility and small-cap stocks underperformed the market. Hedge fund investor letters indicated that they are cutting their overall exposure, closing out some position and doubling down on others. Let’s take a look at the hedge fund sentiment towards Newfield Exploration Co. (NYSE:NFX) to find out whether it was one of their high conviction long-term ideas.

Is Newfield Exploration Co. (NYSE:NFX) a healthy stock for your portfolio? Prominent investors are betting on the stock. The number of long hedge fund bets inched up by 16 recently. Our calculations also showed that NFX isn’t among the 30 most popular stocks among hedge funds. NFX was in 39 hedge funds’ portfolios at the end of September. There were 23 hedge funds in our database with NFX holdings at the end of the previous quarter. 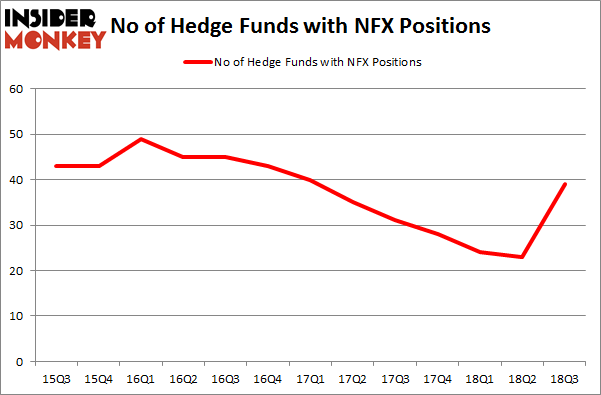 Of the funds tracked by Insider Monkey, Millennium Management, managed by Israel Englander, holds the most valuable position in Newfield Exploration Co. (NYSE:NFX). Millennium Management has a $58.3 million position in the stock, comprising 0.1% of its 13F portfolio. Coming in second is Impala Asset Management, led by Robert Bishop, holding a $52.5 million position; 1.7% of its 13F portfolio is allocated to the stock. Other peers that are bullish include Andrew Feldstein and Stephen Siderow’s Blue Mountain Capital, D. E. Shaw’s D E Shaw and John Overdeck and David Siegel’s Two Sigma Advisors.

Consequently, some big names have been driving this bullishness. Point72 Asset Management, managed by Steve Cohen, established the most valuable position in Newfield Exploration Co. (NYSE:NFX). Point72 Asset Management had $14.8 million invested in the company at the end of the quarter. Vince Maddi and Shawn Brennan’s SIR Capital Management also initiated a $13.9 million position during the quarter. The other funds with new positions in the stock are Sara Nainzadeh’s Centenus Global Management, Brad Dunkley and Blair Levinsky’s Waratah Capital Advisors, and Matthew Tewksbury’s Stevens Capital Management.

As you can see these stocks had an average of 14.75 hedge funds with bullish positions and the average amount invested in these stocks was $257 million. That figure was $376 million in NFX’s case. Starwood Property Trust, Inc. (NYSE:STWD) is the most popular stock in this table. On the other hand Dr. Reddy’s Laboratories Limited (NYSE:RDY) is the least popular one with only 9 bullish hedge fund positions. Compared to these stocks Newfield Exploration Co. (NYSE:NFX) is more popular among hedge funds. Considering that hedge funds are fond of this stock in relation to its market cap peers, it may be a good idea to analyze it in detail and potentially include it in your portfolio.