Is NetEase, Inc (NTES) A Good Stock To Buy?

The market has been volatile as the Federal Reserve continues its rate hikes to normalize the interest rates. Small cap stocks have been hit hard as a result, as the Russell 2000 ETF (IWM) has underperformed the larger S&P 500 ETF (SPY) by about 4 percentage points through November 16th. SEC filings and hedge fund investor letters indicate that the smart money seems to be paring back their overall long exposure since summer months, and the funds’ movements is one of the reasons why the major indexes have retraced. In this article, we analyze what the smart money thinks of NetEase, Inc (NASDAQ:NTES) and find out how it is affected by hedge funds’ moves.

NetEase, Inc (NASDAQ:NTES) has experienced an increase in enthusiasm from smart money lately. NTES was in 26 hedge funds’ portfolios at the end of September. There were 24 hedge funds in our database with NTES holdings at the end of the previous quarter. Our calculations also showed that NTES isn’t among the 30 most popular stocks among hedge funds.

What does the smart money think about NetEase, Inc (NASDAQ:NTES)?

At Q3’s end, a total of 26 of the hedge funds tracked by Insider Monkey held long positions in this stock, a change of 8% from the previous quarter. The graph below displays the number of hedge funds with bullish position in NTES over the last 13 quarters. With hedgies’ sentiment swirling, there exists an “upper tier” of notable hedge fund managers who were upping their stakes meaningfully (or already accumulated large positions). 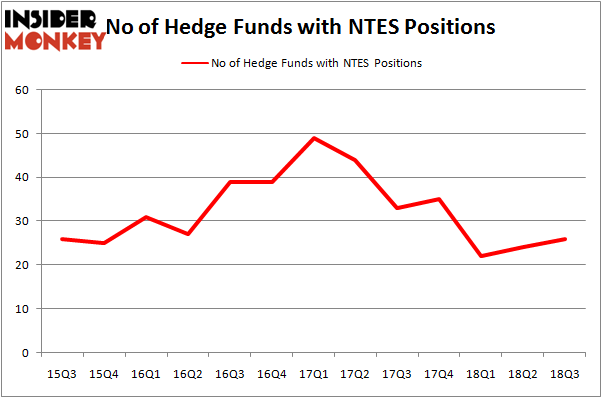 As you can see these stocks had an average of 55 hedge funds with bullish positions and the average amount invested in these stocks was $3.80 billion. That figure was $3.08 billion in NTES’s case. NXP Semiconductors NV (NASDAQ:NXPI) is the most popular stock in this table. On the other hand Fortive Corporation (NYSE:FTV) is the least popular one with only 35 bullish hedge fund positions. Compared to these stocks NetEase, Inc (NASDAQ:NTES) is even less popular than FTV. Considering that hedge funds aren’t fond of this stock in relation to other companies analyzed in this article, it may be a good idea to analyze it in detail and understand why the smart money isn’t behind this stock. This isn’t necessarily bad news. Although it is possible that hedge funds may think the stock is overpriced and view the stock as a short candidate, they may not be very familiar with the bullish thesis. In either case more research is warranted.