As we already know from media reports and hedge fund investor letters, hedge funds delivered their best returns in a decade. Most investors who decided to stick with hedge funds after a rough 2018 recouped their losses by the end of the second quarter. We get to see hedge funds’ thoughts towards the market and individual stocks by aggregating their quarterly portfolio movements and reading their investor letters. In this article, we will particularly take a look at what hedge funds think about National General Holdings Corp (NASDAQ:NGHC).

Hedge fund interest in National General Holdings Corp (NASDAQ:NGHC) shares was flat at the end of last quarter. This is usually a negative indicator. At the end of this article we will also compare NGHC to other stocks including Spectrum Brands Holdings, Inc. (NYSE:SPB), CRISPR Therapeutics AG (NASDAQ:CRSP), and Adtalem Global Education Inc. (NYSE:ATGE) to get a better sense of its popularity. Our calculations also showed that NGHC isn’t among the 30 most popular stocks among hedge funds (view the video below).

If you’d ask most market participants, hedge funds are seen as unimportant, old investment tools of yesteryear. While there are over 8000 funds trading today, Our researchers look at the upper echelon of this club, around 750 funds. Most estimates calculate that this group of people watch over most of the smart money’s total capital, and by keeping an eye on their first-class investments, Insider Monkey has uncovered several investment strategies that have historically outpaced the broader indices. Insider Monkey’s flagship hedge fund strategy defeated the S&P 500 index by around 5 percentage points annually since its inception in May 2014. We were able to generate large returns even by identifying short candidates. Our portfolio of short stocks lost 25.7% since February 2017 (through September 30th) even though the market was up more than 33% during the same period. We just shared a list of 10 short targets in our latest quarterly update .

What have hedge funds been doing with National General Holdings Corp (NASDAQ:NGHC)? 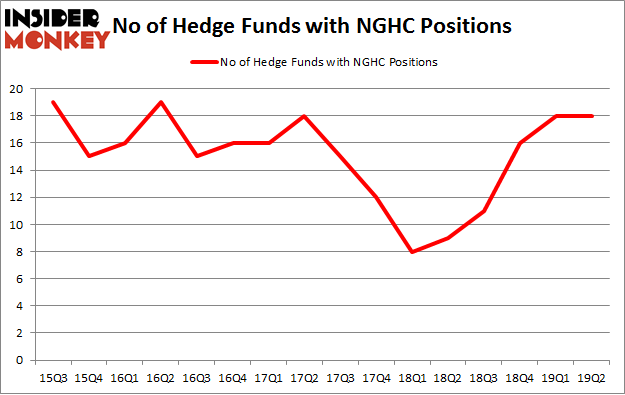 More specifically, Park West Asset Management was the largest shareholder of National General Holdings Corp (NASDAQ:NGHC), with a stake worth $120.4 million reported as of the end of March. Trailing Park West Asset Management was MSDC Management, which amassed a stake valued at $49.6 million. Nut Tree Capital, Citadel Investment Group, and Renaissance Technologies were also very fond of the stock, giving the stock large weights in their portfolios.

Since National General Holdings Corp (NASDAQ:NGHC) has witnessed declining sentiment from hedge fund managers, logic holds that there were a few fund managers that decided to sell off their positions entirely by the end of the second quarter. At the top of the heap, Matthew Halbower’s Pentwater Capital Management sold off the largest investment of all the hedgies watched by Insider Monkey, comprising an estimated $1.2 million in stock. Peter Rathjens, Bruce Clarke and John Campbell’s fund, Arrowstreet Capital, also cut its stock, about $0.7 million worth. These transactions are intriguing to say the least, as total hedge fund interest stayed the same (this is a bearish signal in our experience).

As you can see these stocks had an average of 18.75 hedge funds with bullish positions and the average amount invested in these stocks was $405 million. That figure was $226 million in NGHC’s case. Spectrum Brands Holdings, Inc. (NYSE:SPB) is the most popular stock in this table. On the other hand CRISPR Therapeutics AG (NASDAQ:CRSP) is the least popular one with only 13 bullish hedge fund positions. National General Holdings Corp (NASDAQ:NGHC) is not the least popular stock in this group but hedge fund interest is still below average. This is a slightly negative signal and we’d rather spend our time researching stocks that hedge funds are piling on. Our calculations showed that top 20 most popular stocks among hedge funds returned 24.4% in 2019 through September 30th and outperformed the S&P 500 ETF (SPY) by 4 percentage points. Unfortunately NGHC wasn’t nearly as popular as these 20 stocks (hedge fund sentiment was quite bearish); NGHC investors were disappointed as the stock returned 0.3% during the third quarter and underperformed the market. If you are interested in investing in large cap stocks with huge upside potential, you should check out the top 20 most popular stocks among hedge funds as many of these stocks already outperformed the market so far in 2019.