Is Morgan Stanley (MS) Going to Burn These Hedge Funds?

Hedge funds and other institutional investors have just completed filing their 13Fs with the Securities and Exchange Commission, revealing their equity portfolios as of the end of September. At Insider Monkey, we follow over 700 of the best-performing investors and by analyzing their 13F filings, we can determine the stocks that they are collectively bullish on. One of their picks is Morgan Stanley (NYSE:MS), one of the 10 Most Ruthless Companies in Business Today, so let’s take a closer look at the sentiment that surrounds it in the current quarter.

Morgan Stanley (NYSE:MS) was owned by 51 hedge funds at the end of the third quarter, remaining within a narrow range of hedge fund ownership for the fifth-straight quarter. Morgan Stanley topped our list of the 20 Dividend Stocks That Billionaires Are Piling On, though it nonetheless failed to finish among the 30 Most Popular Stocks Among Hedge Funds. Even with its dividend yield approaching 3%, Morgan Stanley’s payout ratio is well under control at less than 25%.

In the eyes of most market participants, hedge funds are perceived as underperforming, old investment tools of years past. While there are over 8,000 funds in operation today, our experts choose to focus on the crème de la crème of this group, about 700 funds. These investment experts direct the majority of the hedge fund industry’s total asset base, and by tailing their top stock picks, Insider Monkey has come up with various investment strategies that have historically surpassed the market. Insider Monkey’s flagship hedge fund strategy outstripped the S&P 500 index by 6 percentage points a year since its inception in May 2014 through early November 2018. We were able to generate large returns even by identifying short candidates. Our portfolio of short stocks lost 26.1% since February 2017 even though the market was up nearly 19% during the same period. We just shared a list of 11 short targets in our latest quarterly update.

How have hedgies been trading Morgan Stanley (NYSE:MS)? 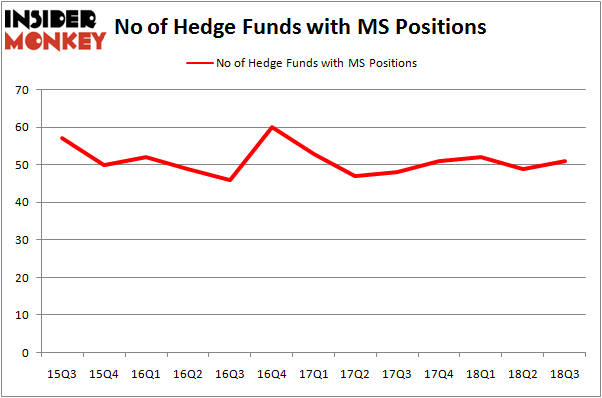 According to publicly available hedge fund and institutional investor holdings data compiled by Insider Monkey, ValueAct Capital, managed by Jeffrey Ubben, holds the biggest position in Morgan Stanley (NYSE:MS). ValueAct Capital has a $969.1 million position in the stock, comprising 9.5% of its 13F portfolio. The second most bullish fund manager is Ken Griffin of Citadel Investment Group, with a $919.6 million position; 0.4% of its 13F portfolio is allocated to the stock. Other peers that hold long positions include Boykin Curry’s Eagle Capital Management, Richard S. Pzena’s Pzena Investment Management and Noam Gottesman’s GLG Partners.

As you can see these stocks had an average of 34 hedge funds with bullish positions and the average amount invested in these stocks was $1.82 billion. That figure was $4.64 billion in MS’s case. Baidu, Inc. (NASDAQ:BIDU) is the most popular stock in this table. On the other hand ASML Holding N.V. (NASDAQ:ASML) is the least popular one with only 13 bullish hedge fund positions. Morgan Stanley (NYSE:MS) is not the most popular stock in this group but hedge fund interest is still above average. This is a positive signal and Morgan Stanley is particularly popular among the wealthiest investors. This looks like a good dividend stock to hold for the long term.