We know that hedge funds generate strong, risk-adjusted returns over the long run, therefore imitating the picks that they are collectively bullish on can be a profitable strategy for retail investors. With billions of dollars in assets, smart money investors have to conduct complex analyses, spend many resources and use tools that are not always available for the general crowd. This doesn’t mean that they don’t have occasional colossal losses; they do (like Peltz’s recent General Electric losses). However, it is still a good idea to keep an eye on hedge fund activity. With this in mind, as the current round of 13F filings has just ended, let’s examine the smart money sentiment towards Monolithic Power Systems, Inc. (NASDAQ:MPWR).

Monolithic Power Systems, Inc. (NASDAQ:MPWR) was in 22 hedge funds’ portfolios at the end of September. MPWR has seen a decrease in activity from the world’s largest hedge funds of late. There were 23 hedge funds in our database with MPWR holdings at the end of the previous quarter. Our calculations also showed that MPWR isn’t among the 30 most popular stocks among hedge funds (click for Q3 rankings and see the video below for Q2 rankings).

In the eyes of most market participants, hedge funds are seen as slow, old investment vehicles of the past. While there are greater than 8000 funds trading at the moment, Our experts look at the elite of this group, approximately 750 funds. It is estimated that this group of investors command the lion’s share of the smart money’s total asset base, and by keeping an eye on their best equity investments, Insider Monkey has identified many investment strategies that have historically defeated the S&P 500 index. Insider Monkey’s flagship short hedge fund strategy defeated the S&P 500 short ETFs by around 20 percentage points annually since its inception in May 2014. Our portfolio of short stocks lost 27.8% since February 2017 (through November 21st) even though the market was up more than 39% during the same period. We just shared a list of 7 short targets in our latest quarterly update .

Unlike the largest US hedge funds that are convinced Dow will soar past 40,000 or the world’s most bearish hedge fund that’s more convinced than ever that a crash is coming, our long-short investment strategy doesn’t rely on bull or bear markets to deliver double digit returns. We only rely on the best performing hedge funds‘ buy/sell signals. Let’s take a gander at the latest hedge fund action regarding Monolithic Power Systems, Inc. (NASDAQ:MPWR). 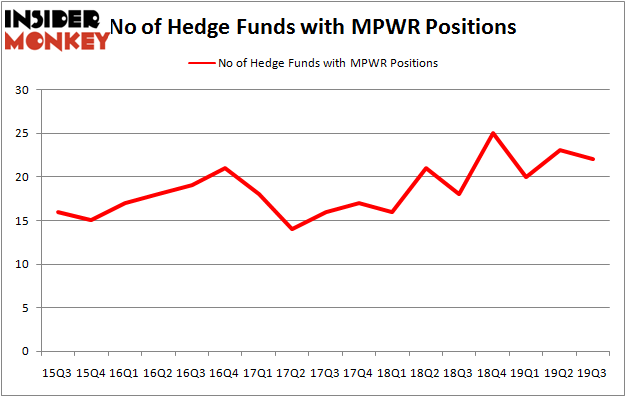 According to publicly available hedge fund and institutional investor holdings data compiled by Insider Monkey, Whale Rock Capital Management, managed by Alex Sacerdote, holds the most valuable position in Monolithic Power Systems, Inc. (NASDAQ:MPWR). Whale Rock Capital Management has a $62.1 million position in the stock, comprising 1.1% of its 13F portfolio. Sitting at the No. 2 spot is Brian Ashford-Russell and Tim Woolley of Polar Capital, with a $32.8 million position; the fund has 0.3% of its 13F portfolio invested in the stock. Remaining professional money managers with similar optimism comprise John Osterweis’s Osterweis Capital Management, John Hurley’s Cavalry Asset Management and Noam Gottesman’s GLG Partners. In terms of the portfolio weights assigned to each position Cavalry Asset Management allocated the biggest weight to Monolithic Power Systems, Inc. (NASDAQ:MPWR), around 4.12% of its 13F portfolio. Crosslink Capital is also relatively very bullish on the stock, setting aside 1.88 percent of its 13F equity portfolio to MPWR.

Because Monolithic Power Systems, Inc. (NASDAQ:MPWR) has witnessed declining sentiment from hedge fund managers, it’s easy to see that there exists a select few fund managers who were dropping their positions entirely heading into Q4. At the top of the heap, Anand Parekh’s Alyeska Investment Group dropped the biggest stake of the 750 funds watched by Insider Monkey, totaling an estimated $9 million in stock. Dmitry Balyasny’s fund, Balyasny Asset Management, also dumped its stock, about $2.1 million worth. These bearish behaviors are intriguing to say the least, as aggregate hedge fund interest was cut by 1 funds heading into Q4.

Let’s check out hedge fund activity in other stocks – not necessarily in the same industry as Monolithic Power Systems, Inc. (NASDAQ:MPWR) but similarly valued. We will take a look at CubeSmart (NYSE:CUBE), Etsy Inc (NASDAQ:ETSY), Woodward Inc (NASDAQ:WWD), and Commerce Bancshares, Inc. (NASDAQ:CBSH). This group of stocks’ market values are similar to MPWR’s market value.

As you can see these stocks had an average of 25.25 hedge funds with bullish positions and the average amount invested in these stocks was $476 million. That figure was $193 million in MPWR’s case. Etsy Inc (NASDAQ:ETSY) is the most popular stock in this table. On the other hand Commerce Bancshares, Inc. (NASDAQ:CBSH) is the least popular one with only 9 bullish hedge fund positions. Monolithic Power Systems, Inc. (NASDAQ:MPWR) is not the least popular stock in this group but hedge fund interest is still below average. This is a slightly negative signal and we’d rather spend our time researching stocks that hedge funds are piling on. Our calculations showed that top 20 most popular stocks among hedge funds returned 37.4% in 2019 through the end of November and outperformed the S&P 500 ETF (SPY) by 9.9 percentage points. Unfortunately MPWR wasn’t nearly as popular as these 20 stocks (hedge fund sentiment was quite bearish); MPWR investors were disappointed as the stock returned 3.2% during the first two months of the fourth quarter and underperformed the market. If you are interested in investing in large cap stocks with huge upside potential, you should check out the top 20 most popular stocks among hedge funds as 70 percent of these stocks already outperformed the market in Q4.