“Market conditions are changing. The continued rise in interest rates suggests we are in the early stages of a bond bear market, which could intensify as central banks withdraw liquidity. The receding tide of liquidity will start to reveal more rocks beyond what has been exposed in emerging markets so far, and the value of a value discipline will be in avoiding the biggest capital-destroying rocks. If a rock emerges on the crowded shore of U.S. momentum, it could result in a major liquidity challenge, as momentum is often most intense on the downside as a crowded trade reverses. So investors are facing a large potential trade-off right now: continue to bet on the current dominance of momentum and the S&P 500, or bet on change and take an active value bet in names with attractive value and optionality, but with negative momentum,” said Clearbridge Investments in its market commentary. We aren’t sure whether long-term interest rates will top 5% and value stocks outperform growth, but we follow hedge fund investor letters to understand where the markets and stocks might be going. This article will lay out and discuss the hedge fund and institutional investor sentiment towards Micro Focus International plc (NYSE:MFGP).

While researching to gather more data about Micro Focus International plc (NYSE:MFGP), in order to be able to determine whether you should consider this stock for your portfolio, we tracked down Curren Capital’s Third Quarter Letter, in which it shares its views on the company. We bring you that part of the letter:

“Micro Focus is our fund’s newest and largest investment position. Micro Focus specializes in acquiring and managing declining software businesses. For example, they are a world leader in COBOL (the most widely used programming language… in 1970). Micro Focus’s strategy is to intelligently manage critical but declining software assets – investing only where the customer will pay, and otherwise allocating the business’s cash flows in a shareholder friendly manner. This has historically meant dividends (in the most tax efficient manner for its UK shareholders), small acquisitions at attractive prices, and a large acquisition every few years. This business strategy appeals to me, and the executive chairman has a solid track record of executing it since he began leading Micro Focus in 2011.

I first learned of Micro Focus in 2017, when Hewlett Packard Enterprise was selling its software business (largely comprised of its ill-fated acquisition of Autonomy) to Micro Focus through a combined merger- spinoff. I did not love HPE’s capital allocation, while Micro Focus seemed popular and expensive, and I was not excited that a HPE executive would be CEO of the combined company. So I moved on and analyzed other businesses.

This past August I was reminded to revisit Micro Focus and I loved how the story had changed. The HPE executive was out, replaced by Micro Focus executives who had a solid track record of acquiring and managing declining assets, while intelligently allocating the resulting cash flows. Also, the stock price had dropped in a big way. The more I learned, the more I liked the business, management, and price. Micro Focus met our three key criteria, and we bought shares, making it a 15% position. With less than 15% of the fund in cash, we had to sell an existing investment to buy Micro Focus. I decided that Teikoku Sen-I was our least attractive holding, and when push came to shove, I felt that Micro Focus was superior. Teikoku Sen-I is a very good business, with an attractive upside-to-downside ratio, but Micro Focus’ management is better at allocating capital. We received ¥2,329/share from selling Teikoku.

In late August, Micro Focus began a share repurchase program – its first in 6+ years. The Executive Chairman then bought shares personally, and even transferred shares to himself from his wife’s account. I appreciated that management recognized that the stock price was attractive and acted on the opportunity. I also felt that the $200m share repurchase plan improved the odds that some of the $2.1B that they will receive from the announced sale of their SUSE business (for a good price) will also be used to repurchase shares.

These actions improved my assessment of management’s ability to allocate capital and increased my upside and downside valuations for the business. The stock price was higher than when we first bought, but the upside-to-downside was even more attractive. We had limited cash to invest in Micro Focus, so I compared adding to Micro Focus against keeping 10% of the fund in each of our existing positions. I decided that I was willing to reduce our position in Conduent to increase our position in Micro Focus. Both companies are attractive, but Micro Focus won when I compared them head-to-head, due to a more attractive price and a longer record of intelligent and shareholder-friendly capital allocation. We sold Conduent at $22.71/share, and our cost for buying Micro Focus throughout the quarter was $16.23/share.“

Despite Curren Capital’s optimism for the stock, we are still not convinced, and would like to continue with our analysis, checking out the recent hedge fund action regarding Micro Focus International plc (NYSE:MFGP).

At the end of the third quarter, a total of 10 of the hedge funds tracked by Insider Monkey were long this stock, a drop of 29% from the previous quarter. The graph below displays the number of hedge funds with bullish position in MFGP over the last 13 quarters. With the smart money’s positions undergoing their usual ebb and flow, there exists a few key hedge fund managers who were upping their stakes considerably (or already accumulated large positions). 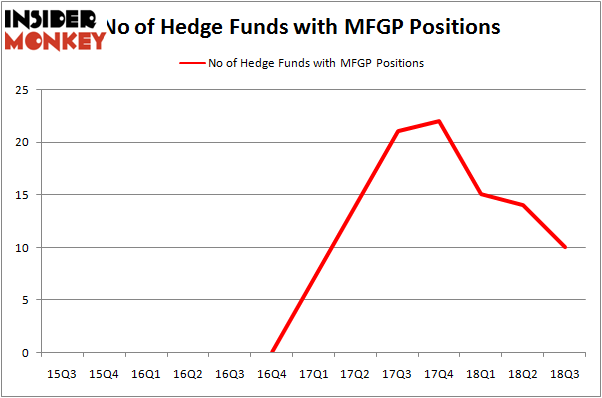 More specifically, Elliott Management was the largest shareholder of Micro Focus International plc (NYSE:MFGP), with a stake worth $115.5 million reported as of the end of September. Trailing Elliott Management was Roystone Capital Partners, which amassed a stake valued at $29.3 million. Angelo Gordon & Co, Renaissance Technologies, and Prescott Group Capital Management were also very fond of the stock, giving the stock large weights in their portfolios.

Since Micro Focus International plc (NYSE:MFGP) has experienced bearish sentiment from hedge fund managers, logic holds that there exists a select few fund managers that elected to cut their full holdings heading into Q3. Interestingly, Richard S. Pzena’s Pzena Investment Management dropped the largest investment of the “upper crust” of funds followed by Insider Monkey, totaling close to $73.4 million in stock, and Isaac Corre’s Governors Lane was right behind this move, as the fund dropped about $5.5 million worth. These bearish behaviors are important to note, as total hedge fund interest dropped by 4 funds heading into Q3.

As you can see these stocks had an average of 27 hedge funds with bullish positions and the average amount invested in these stocks was $545 million. That figure was $178 million in MFGP’s case. HD Supply Holdings Inc (NASDAQ:HDS) is the most popular stock in this table. On the other hand News Corporation (NASDAQ:NWS) is the least popular one with only 10 bullish hedge fund positions. Compared to these stocks Micro Focus International plc (NYSE:MFGP) is even less popular than NWS. Considering that hedge funds aren’t fond of this stock in relation to other companies analyzed in this article, it may be a good idea to analyze it in detail and understand why the smart money isn’t behind this stock. This isn’t necessarily bad news. Although it is possible that hedge funds may think the stock is overpriced and view the stock as a short candidate, they may not be very familiar with the bullish thesis. In either case more research is warranted.