Is Mantech International Corp (MANT) A Good Stock To Buy ?

The market has been volatile in the fourth quarter as the Federal Reserve continued its rate hikes to normalize the interest rates. Small cap stocks have been hit hard as a result, as the Russell 2000 ETF (IWM) has underperformed the larger S&P 500 ETF (SPY) by nearly 7 percentage points. SEC filings and hedge fund investor letters indicate that the smart money seems to be paring back their overall long exposure since summer months, and the funds’ movements is one of the reasons why the major indexes have retraced. In this article, we analyze what the smart money thinks of Mantech International Corp (NASDAQ:MANT) and find out how it is affected by hedge funds’ moves.

Mantech International Corp (NASDAQ:MANT) has experienced a decrease in support from the world’s most elite money managers in recent months. MANT was in 10 hedge funds’ portfolios at the end of December. There were 14 hedge funds in our database with MANT positions at the end of the previous quarter. Our calculations also showed that mant isn’t among the 30 most popular stocks among hedge funds.

In the 21st century investor’s toolkit there are several indicators stock traders can use to appraise publicly traded companies. Two of the less known indicators are hedge fund and insider trading sentiment. We have shown that, historically, those who follow the top picks of the top money managers can beat the broader indices by a solid margin (see the details here). 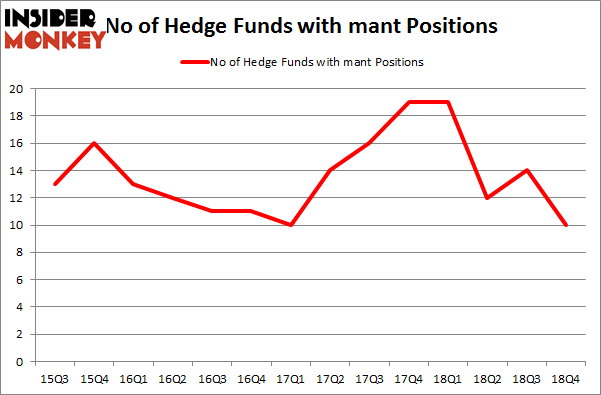 Among these funds, Citadel Investment Group held the most valuable stake in Mantech International Corp (NASDAQ:MANT), which was worth $2.9 million at the end of the third quarter. On the second spot was Horizon Asset Management which amassed $1.3 million worth of shares. Moreover, Two Sigma Advisors, AQR Capital Management, and GLG Partners were also bullish on Mantech International Corp (NASDAQ:MANT), allocating a large percentage of their portfolios to this stock.

Because Mantech International Corp (NASDAQ:MANT) has faced a decline in interest from the aggregate hedge fund industry, we can see that there were a few fund managers who sold off their positions entirely in the third quarter. Intriguingly, Paul Marshall and Ian Wace’s Marshall Wace LLP dropped the largest investment of the “upper crust” of funds tracked by Insider Monkey, totaling about $3 million in stock, and Matthew Hulsizer’s PEAK6 Capital Management was right behind this move, as the fund dumped about $0.8 million worth. These transactions are interesting, as aggregate hedge fund interest was cut by 4 funds in the third quarter.

Let’s check out hedge fund activity in other stocks – not necessarily in the same industry as Mantech International Corp (NASDAQ:MANT) but similarly valued. We will take a look at Select Medical Holdings Corporation (NYSE:SEM), Avalara, Inc. (NYSE:AVLR), The Navigators Group, Inc (NASDAQ:NAVG), and Bottomline Technologies (de), Inc. (NASDAQ:EPAY). All of these stocks’ market caps are similar to MANT’s market cap.

As you can see these stocks had an average of 16.75 hedge funds with bullish positions and the average amount invested in these stocks was $252 million. That figure was $8 million in MANT’s case. Select Medical Holdings Corporation (NYSE:SEM) is the most popular stock in this table. On the other hand Avalara, Inc. (NYSE:AVLR) is the least popular one with only 14 bullish hedge fund positions. Compared to these stocks Mantech International Corp (NASDAQ:MANT) is even less popular than AVLR. Hedge funds dodged a bullet by taking a bearish stance towards MANT. Our calculations showed that the top 15 most popular hedge fund stocks returned 24.2% through April 22nd and outperformed the S&P 500 ETF (SPY) by more than 7 percentage points. Unfortunately MANT wasn’t nearly as popular as these 15 stock (hedge fund sentiment was very bearish); MANT investors were disappointed as the stock returned 7.5% and underperformed the market. If you are interested in investing in large cap stocks with huge upside potential, you should check out the top 15 most popular stocks) among hedge funds as 13 of these stocks already outperformed the market this year.