Is Leggett & Platt, Incorporated (LEG) A Good Stock To Buy?

Investing in small cap stocks has historically been a way to outperform the market, as small cap companies typically grow faster on average than the blue chips. That outperformance comes with a price, however, as there are occasional periods of higher volatility. The last 12 months is one of those periods, as the Russell 2000 ETF (IWM) has underperformed the larger S&P 500 ETF (SPY) by more than 10 percentage points. Given that the funds we track tend to have a disproportionate amount of their portfolios in smaller cap stocks, they have seen some volatility in their portfolios too. Actually their moves are potentially one of the factors that contributed to this volatility. In this article, we use our extensive database of hedge fund holdings to find out what the smart money thinks of Leggett & Platt, Incorporated (NYSE:LEG).

Leggett & Platt, Incorporated (NYSE:LEG) was in 9 hedge funds’ portfolios at the end of the second quarter of 2019. LEG investors should be aware of a decrease in hedge fund sentiment lately. There were 10 hedge funds in our database with LEG holdings at the end of the previous quarter. Our calculations also showed that LEG isn’t among the 30 most popular stocks among hedge funds.

Today there are a lot of tools investors put to use to analyze publicly traded companies. Some of the most underrated tools are hedge fund and insider trading interest. We have shown that, historically, those who follow the best picks of the top hedge fund managers can beat their index-focused peers by a solid margin (see the details here).

Unlike some fund managers who are betting on Dow reaching 40000 in a year, our long-short investment strategy doesn’t rely on bull markets to deliver double digit returns. We only rely on hedge fund buy/sell signals. Let’s take a peek at the fresh hedge fund action surrounding Leggett & Platt, Incorporated (NYSE:LEG).

At the end of the second quarter, a total of 9 of the hedge funds tracked by Insider Monkey held long positions in this stock, a change of -10% from the first quarter of 2019. The graph below displays the number of hedge funds with bullish position in LEG over the last 16 quarters. So, let’s find out which hedge funds were among the top holders of the stock and which hedge funds were making big moves. 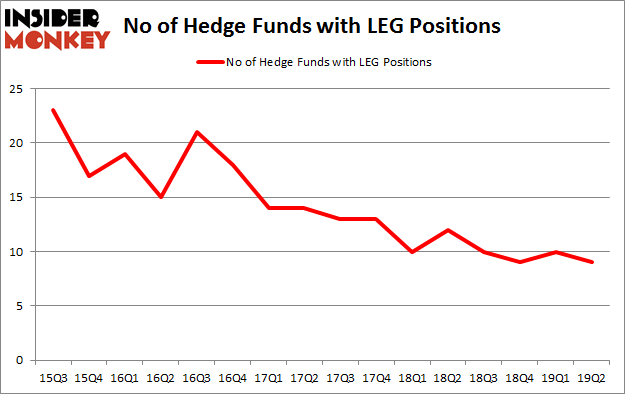 More specifically, Citadel Investment Group was the largest shareholder of Leggett & Platt, Incorporated (NYSE:LEG), with a stake worth $11.4 million reported as of the end of March. Trailing Citadel Investment Group was Millennium Management, which amassed a stake valued at $8.9 million. Holocene Advisors, Balyasny Asset Management, and Waratah Capital Advisors were also very fond of the stock, giving the stock large weights in their portfolios.

Judging by the fact that Leggett & Platt, Incorporated (NYSE:LEG) has witnessed a decline in interest from the aggregate hedge fund industry, it’s safe to say that there lies a certain “tier” of hedgies that elected to cut their entire stakes by the end of the second quarter. At the top of the heap, Joel Greenblatt’s Gotham Asset Management sold off the biggest position of the 750 funds watched by Insider Monkey, totaling close to $11.2 million in stock, and Noam Gottesman’s GLG Partners was right behind this move, as the fund said goodbye to about $4.4 million worth. These moves are important to note, as total hedge fund interest was cut by 1 funds by the end of the second quarter.

As you can see these stocks had an average of 19.5 hedge funds with bullish positions and the average amount invested in these stocks was $1175 million. That figure was $30 million in LEG’s case. Science Applications International Corporation (NYSE:SAIC) is the most popular stock in this table. On the other hand ICU Medical, Inc. (NASDAQ:ICUI) is the least popular one with only 15 bullish hedge fund positions. Compared to these stocks Leggett & Platt, Incorporated (NYSE:LEG) is even less popular than ICUI. Hedge funds clearly dropped the ball on LEG as the stock delivered strong returns, though hedge funds’ consensus picks still generated respectable returns. Our calculations showed that top 20 most popular stocks (view the video below) among hedge funds returned 24.4% in 2019 through September 30th and outperformed the S&P 500 ETF (SPY) by 4 percentage points. A small number of hedge funds were also right about betting on LEG as the stock returned 7.7% during the third quarter and outperformed the market by an even larger margin.