Hedge funds are not perfect. They have their bad picks just like everyone else. Facebook, a stock hedge funds have loved dearly, lost nearly 40% of its value at one point in 2018. Although hedge funds are not perfect, their consensus picks do deliver solid returns, however. Our data show the top 20 S&P 500 stocks among hedge funds beat the S&P 500 Index by 4 percentage points so far in 2019. Because hedge funds have a lot of resources and their consensus picks do well, we pay attention to what they think. In this article, we analyze what the elite funds think of Legg Mason, Inc. (NYSE:LM).

Is Legg Mason, Inc. (NYSE:LM) an exceptional investment today? The best stock pickers are buying. The number of bullish hedge fund bets inched up by 1 recently. Our calculations also showed that LM isn’t among the 30 most popular stocks among hedge funds (view the video below). LM was in 18 hedge funds’ portfolios at the end of June. There were 17 hedge funds in our database with LM positions at the end of the previous quarter.

According to most investors, hedge funds are assumed to be slow, old financial tools of the past. While there are over 8000 funds with their doors open at present, Our researchers look at the crème de la crème of this group, approximately 750 funds. These investment experts have their hands on the lion’s share of the smart money’s total capital, and by observing their matchless equity investments, Insider Monkey has identified a number of investment strategies that have historically surpassed the market. Insider Monkey’s flagship hedge fund strategy outpaced the S&P 500 index by around 5 percentage points per year since its inception in May 2014. We were able to generate large returns even by identifying short candidates. Our portfolio of short stocks lost 25.7% since February 2017 (through September 30th) even though the market was up more than 33% during the same period. We just shared a list of 10 short targets in our latest quarterly update .

What does smart money think about Legg Mason, Inc. (NYSE:LM)?

At the end of the second quarter, a total of 18 of the hedge funds tracked by Insider Monkey were bullish on this stock, a change of 6% from the previous quarter. On the other hand, there were a total of 17 hedge funds with a bullish position in LM a year ago. With the smart money’s positions undergoing their usual ebb and flow, there exists a few notable hedge fund managers who were boosting their holdings considerably (or already accumulated large positions). 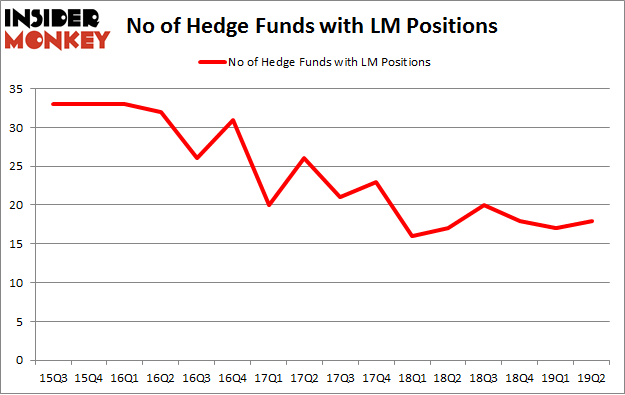 According to publicly available hedge fund and institutional investor holdings data compiled by Insider Monkey, Trian Partners, managed by Nelson Peltz, holds the most valuable position in Legg Mason, Inc. (NYSE:LM). Trian Partners has a $148.4 million position in the stock, comprising 1.6% of its 13F portfolio. On Trian Partners’s heels is Citadel Investment Group, managed by Ken Griffin, which holds a $85.9 million position; less than 0.1%% of its 13F portfolio is allocated to the company. Remaining hedge funds and institutional investors that are bullish include Mario Gabelli’s GAMCO Investors, Renaissance Technologies and Richard S. Pzena’s Pzena Investment Management.

As you can see these stocks had an average of 19.5 hedge funds with bullish positions and the average amount invested in these stocks was $232 million. That figure was $449 million in LM’s case. Extended Stay America Inc (NASDAQ:STAY) is the most popular stock in this table. On the other hand Novanta Inc. (NASDAQ:NOVT) is the least popular one with only 13 bullish hedge fund positions. Legg Mason, Inc. (NYSE:LM) is not the least popular stock in this group but hedge fund interest is still below average. This is a slightly negative signal and we’d rather spend our time researching stocks that hedge funds are piling on. Our calculations showed that top 20 most popular stocks among hedge funds returned 24.4% in 2019 through September 30th and outperformed the S&P 500 ETF (SPY) by 4 percentage points. Unfortunately LM wasn’t nearly as popular as these 20 stocks (hedge fund sentiment was quite bearish); LM investors were disappointed as the stock returned 0.8% during the third quarter and underperformed the market. If you are interested in investing in large cap stocks with huge upside potential, you should check out the top 20 most popular stocks among hedge funds as many of these stocks already outperformed the market so far in 2019.