In these volatile markets we scrutinize hedge fund filings to get a reading on which direction each stock might be going. After several tireless days we have finished crunching the numbers from nearly 835 13F filings issued by the elite hedge funds and other investment firms that we track at Insider Monkey, which disclosed those firms’ equity portfolios as of December 31st. The results of that effort will be put on display in this article, as we share valuable insight into the smart money sentiment towards InVitae Corporation (NYSE:NVTA).

Hedge fund interest in InVitae Corporation (NYSE:NVTA) shares was flat at the end of last quarter. This is usually a negative indicator. The level and the change in hedge fund popularity aren’t the only variables you need to analyze to decipher hedge funds’ perspectives. A stock may witness a boost in popularity but it may still be less popular than similarly priced stocks. That’s why at the end of this article we will examine companies such as Rent-A-Center Inc (NASDAQ:RCII), AAR Corp. (NYSE:AIR), and Moelis & Company (NYSE:MC) to gather more data points. Our calculations also showed that NVTA isn’t among the 30 most popular stocks among hedge funds (click for Q4 rankings and see the video at the end of this article for Q3 rankings).

We leave no stone unturned when looking for the next great investment idea. For example, Federal Reserve and other Central Banks are tripping over each other to print more money. As a result, we believe gold stocks will outperform fixed income ETFs in the long-term. So we are checking out investment opportunities like this one. We read hedge fund investor letters and listen to stock pitches at hedge fund conferences. Our best call in 2020 was shorting the market when S&P 500 was trading at 3150 after realizing the coronavirus pandemic’s significance before most investors. With all of this in mind we’re going to take a gander at the fresh hedge fund action regarding InVitae Corporation (NYSE:NVTA). 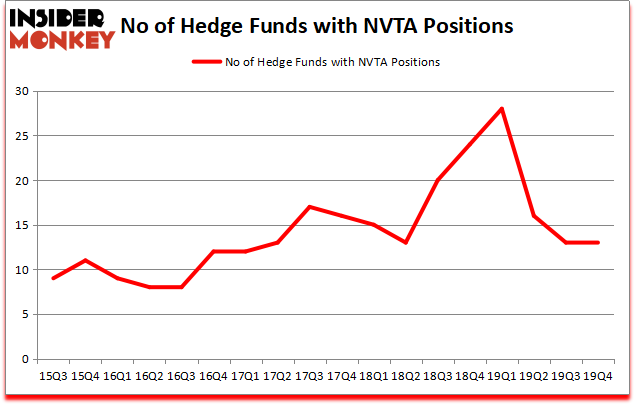 Judging by the fact that InVitae Corporation (NYSE:NVTA) has faced declining sentiment from the smart money, it’s easy to see that there was a specific group of funds that slashed their full holdings last quarter. At the top of the heap, John Osterweis’s Osterweis Capital Management cut the biggest investment of the “upper crust” of funds watched by Insider Monkey, totaling about $2.6 million in stock, and Noam Gottesman’s GLG Partners was right behind this move, as the fund dropped about $2.1 million worth. These moves are important to note, as aggregate hedge fund interest stayed the same (this is a bearish signal in our experience).

Let’s check out hedge fund activity in other stocks – not necessarily in the same industry as InVitae Corporation (NYSE:NVTA) but similarly valued. We will take a look at Rent-A-Center Inc (NASDAQ:RCII), AAR Corp. (NYSE:AIR), Moelis & Company (NYSE:MC), and Arbor Realty Trust, Inc. (NYSE:ABR). All of these stocks’ market caps resemble NVTA’s market cap.

As you can see these stocks had an average of 20.5 hedge funds with bullish positions and the average amount invested in these stocks was $190 million. That figure was $278 million in NVTA’s case. Rent-A-Center Inc (NASDAQ:RCII) is the most popular stock in this table. On the other hand Moelis & Company (NYSE:MC) is the least popular one with only 13 bullish hedge fund positions. Compared to these stocks InVitae Corporation (NYSE:NVTA) is even less popular than MC. Hedge funds dodged a bullet by taking a bearish stance towards NVTA. Our calculations showed that the top 20 most popular hedge fund stocks returned 41.3% in 2019 and outperformed the S&P 500 ETF (SPY) by 10.1 percentage points. These stocks lost 13.0% in 2020 through April 6th but managed to beat the market by 4.2 percentage points. Unfortunately NVTA wasn’t nearly as popular as these 20 stocks (hedge fund sentiment was very bearish); NVTA investors were disappointed as the stock returned -18% during the same time period and underperformed the market. If you are interested in investing in large cap stocks with huge upside potential, you should check out the top 20 most popular stocks among hedge funds as most of these stocks already outperformed the market so far in 2020.