The financial regulations require hedge funds and wealthy investors that exceeded the $100 million equity holdings threshold to file a report that shows their positions at the end of every quarter. Even though it isn’t the intention, these filings to a certain extent level the playing field for ordinary investors. The latest round of 13F filings disclosed the funds’ positions on September 30th. We at Insider Monkey have made an extensive database of nearly 750 of those established hedge funds and famous value investors’ filings. In this article, we analyze how these elite funds and prominent investors traded Illinois Tool Works Inc. (NYSE:ITW) based on those filings.

Hedge fund interest in Illinois Tool Works Inc. (NYSE:ITW) shares was flat at the end of last quarter. This is usually a negative indicator. At the end of this article we will also compare ITW to other stocks including Walgreens Boots Alliance Inc (NASDAQ:WBA), Suncor Energy Inc. (NYSE:SU), and America Movil SAB de CV (NYSE:AMX) to get a better sense of its popularity.

In the 21st century investor’s toolkit there are tons of indicators stock traders can use to evaluate stocks. A pair of the best indicators are hedge fund and insider trading activity. We have shown that, historically, those who follow the top picks of the elite money managers can trounce their index-focused peers by a significant margin (see the details here).

Unlike the largest US hedge funds that are convinced Dow will soar past 40,000 or the world’s most bearish hedge fund that’s more convinced than ever that a crash is coming, our long-short investment strategy doesn’t rely on bull or bear markets to deliver double digit returns. We only rely on the best performing hedge funds‘ buy/sell signals. We’re going to take a glance at the new hedge fund action encompassing Illinois Tool Works Inc. (NYSE:ITW).

At Q3’s end, a total of 28 of the hedge funds tracked by Insider Monkey were bullish on this stock, a change of 0% from the second quarter of 2019. On the other hand, there were a total of 26 hedge funds with a bullish position in ITW a year ago. With hedgies’ positions undergoing their usual ebb and flow, there exists a few noteworthy hedge fund managers who were boosting their stakes meaningfully (or already accumulated large positions). 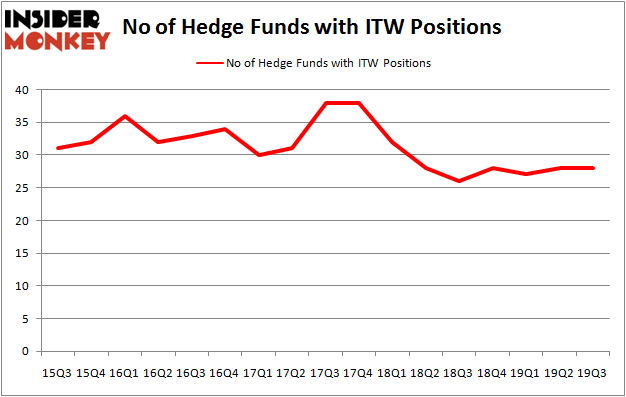 The largest stake in Illinois Tool Works Inc. (NYSE:ITW) was held by AQR Capital Management, which reported holding $47.9 million worth of stock at the end of September. It was followed by Markel Gayner Asset Management with a $44.8 million position. Other investors bullish on the company included Ariel Investments, Nitorum Capital, and Balyasny Asset Management. In terms of the portfolio weights assigned to each position Nitorum Capital allocated the biggest weight to Illinois Tool Works Inc. (NYSE:ITW), around 2.19% of its portfolio. Markel Gayner Asset Management is also relatively very bullish on the stock, dishing out 0.68 percent of its 13F equity portfolio to ITW.

Since Illinois Tool Works Inc. (NYSE:ITW) has faced falling interest from the entirety of the hedge funds we track, logic holds that there lies a certain “tier” of fund managers that slashed their positions entirely in the third quarter. At the top of the heap, Phill Gross and Robert Atchinson’s Adage Capital Management cut the biggest position of the “upper crust” of funds followed by Insider Monkey, totaling an estimated $31.6 million in stock, and Paul Marshall and Ian Wace’s Marshall Wace was right behind this move, as the fund said goodbye to about $1.5 million worth. These bearish behaviors are important to note, as aggregate hedge fund interest stayed the same (this is a bearish signal in our experience).

As you can see these stocks had an average of 28.25 hedge funds with bullish positions and the average amount invested in these stocks was $1004 million. That figure was $335 million in ITW’s case. Suncor Energy Inc. (NYSE:SU) is the most popular stock in this table. On the other hand America Movil SAB de CV (NYSE:AMX) is the least popular one with only 9 bullish hedge fund positions. Illinois Tool Works Inc. (NYSE:ITW) is not the least popular stock in this group but hedge fund interest is still below average. Our calculations showed that top 20 most popular stocks among hedge funds returned 37.4% in 2019 through the end of November and outperformed the S&P 500 ETF (SPY) by 9.9 percentage points. A small number of hedge funds were also right about betting on ITW as the stock returned 11.4% during the first two months of Q4 and outperformed the market by an even larger margin.