Is IAMGOLD Corporation (IAG) A Good Stock To Buy ?

Is IAMGOLD Corporation (NYSE:IAG) a good place to invest some of your money right now? We can gain invaluable insight to help us answer that question by studying the investment trends of top investors, who employ world-class Ivy League graduates, who are given immense resources and industry contacts to put their financial expertise to work. The top picks of these firms have historically outperformed the market when we account for known risk factors, making them very valuable investment ideas.

Is IAMGOLD Corporation (NYSE:IAG) a healthy stock for your portfolio? Hedge funds are becoming hopeful. The number of bullish hedge fund positions inched up by 2 lately. Our calculations also showed that IAG isn’t among the 30 most popular stocks among hedge funds.

We’re going to take a gander at the key hedge fund action regarding IAMGOLD Corporation (NYSE:IAG).

At the end of the fourth quarter, a total of 14 of the hedge funds tracked by Insider Monkey held long positions in this stock, a change of 17% from the second quarter of 2018. The graph below displays the number of hedge funds with bullish position in IAG over the last 14 quarters. So, let’s find out which hedge funds were among the top holders of the stock and which hedge funds were making big moves. 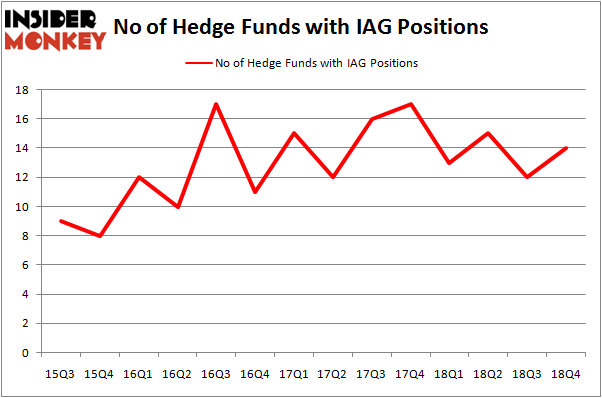 Among these funds, Renaissance Technologies held the most valuable stake in IAMGOLD Corporation (NYSE:IAG), which was worth $81.1 million at the end of the fourth quarter. On the second spot was Marshall Wace LLP which amassed $28.2 million worth of shares. Moreover, Sun Valley Gold, Millennium Management, and Citadel Investment Group were also bullish on IAMGOLD Corporation (NYSE:IAG), allocating a large percentage of their portfolios to this stock.

As one would reasonably expect, some big names were breaking ground themselves. Royce & Associates, managed by Chuck Royce, initiated the most outsized position in IAMGOLD Corporation (NYSE:IAG). Royce & Associates had $5.2 million invested in the company at the end of the quarter. Peter Rathjens, Bruce Clarke and John Campbell’s Arrowstreet Capital also initiated a $2.8 million position during the quarter. The other funds with new positions in the stock are Peter S. Stamos’s Stamos Capital and Matthew Hulsizer’s PEAK6 Capital Management.

Let’s check out hedge fund activity in other stocks – not necessarily in the same industry as IAMGOLD Corporation (NYSE:IAG) but similarly valued. We will take a look at 8×8, Inc. (NYSE::EGHT), ESCO Technologies Inc. (NYSE:ESE), BGC Partners, Inc. (NASDAQ:BGCP), and AnaptysBio, Inc. (NASDAQ:ANAB). All of these stocks’ market caps are closest to IAG’s market cap.

As you can see these stocks had an average of 16.25 hedge funds with bullish positions and the average amount invested in these stocks was $270 million. That figure was $174 million in IAG’s case. BGC Partners, Inc. (NASDAQ:BGCP) is the most popular stock in this table. On the other hand ESCO Technologies Inc. (NYSE:ESE) is the least popular one with only 5 bullish hedge fund positions. IAMGOLD Corporation (NYSE:IAG) is not the least popular stock in this group but hedge fund interest is still below average. This is a slightly negative signal and we’d rather spend our time researching stocks that hedge funds are piling on. Our calculations showed that top 15 most popular stocks) among hedge funds returned 24.2% through April 22nd and outperformed the S&P 500 ETF (SPY) by more than 7 percentage points. Unfortunately IAG wasn’t nearly as popular as these 15 stock (hedge fund sentiment was quite bearish); IAG investors were disappointed as the stock returned -19.6% and underperformed the market. If you are interested in investing in large cap stocks with huge upside potential, you should check out the top 15 most popular stocks) among hedge funds as 13 of these stocks already outperformed the market this year.