Is Homology Medicines, Inc. (FIXX) A Good Stock To Buy?

Homology Medicines, Inc. (NASDAQ:FIXX) has seen an increase in enthusiasm from smart money in recent months. FIXX was in 8 hedge funds’ portfolios at the end of the fourth quarter of 2018. There were 6 hedge funds in our database with FIXX holdings at the end of the previous quarter. Our calculations also showed that fixx isn’t among the 30 most popular stocks among hedge funds. 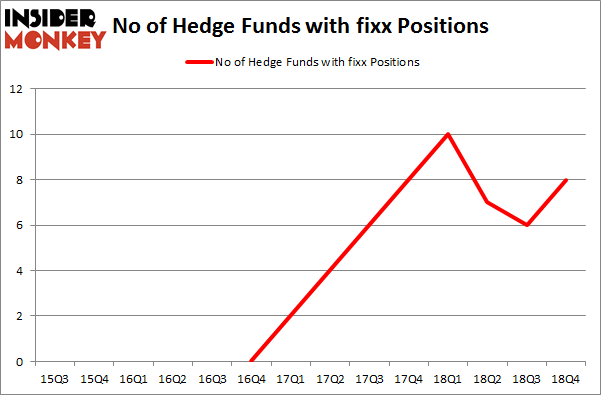 When looking at the institutional investors followed by Insider Monkey, James E. Flynn’s Deerfield Management has the biggest position in Homology Medicines, Inc. (NASDAQ:FIXX), worth close to $116.9 million, accounting for 4.7% of its total 13F portfolio. The second largest stake is held by Vivo Capital, led by Albert Cha and Frank Kung, holding a $25.9 million position; the fund has 3.3% of its 13F portfolio invested in the stock. Some other members of the smart money with similar optimism contain Kris Jenner, Gordon Bussard, Graham McPhail’s Rock Springs Capital Management, Eli Casdin’s Casdin Capital and Brian Ashford-Russell and Tim Woolley’s Polar Capital.

As one would reasonably expect, key money managers were breaking ground themselves. Vivo Capital, managed by Albert Cha and Frank Kung, initiated the most valuable position in Homology Medicines, Inc. (NASDAQ:FIXX). Vivo Capital had $25.9 million invested in the company at the end of the quarter. Brian Ashford-Russell and Tim Woolley’s Polar Capital also made a $2.2 million investment in the stock during the quarter. The other funds with new positions in the stock are Julian Robertson’s Tiger Management and Gavin Saitowitz and Cisco J. del Valle’s Springbok Capital.

As you can see these stocks had an average of 15.75 hedge funds with bullish positions and the average amount invested in these stocks was $91 million. That figure was $164 million in FIXX’s case. Skyline Champion Corporation (NYSE:SKY) is the most popular stock in this table. On the other hand New York Mortgage Trust, Inc. (NASDAQ:NYMT) is the least popular one with only 9 bullish hedge fund positions. Compared to these stocks Homology Medicines, Inc. (NASDAQ:FIXX) is even less popular than NYMT. Hedge funds dodged a bullet by taking a bearish stance towards FIXX. Our calculations showed that the top 15 most popular hedge fund stocks returned 24.2% through April 22nd and outperformed the S&P 500 ETF (SPY) by more than 7 percentage points. Unfortunately FIXX wasn’t nearly as popular as these 15 stock (hedge fund sentiment was very bearish); FIXX investors were disappointed as the stock returned -2.4% and underperformed the market. If you are interested in investing in large cap stocks with huge upside potential, you should check out the top 15 most popular stocks) among hedge funds as 13 of these stocks already outperformed the market this year.