Is Guidewire Software Inc (GWRE) A Good Stock To Buy According To Hedgies?

Guidewire Software Inc (NYSE:GWRE) investors should pay attention to a decrease in enthusiasm from smart money recently. Our calculations also showed that GWRE isn’t among the 30 most popular stocks among hedge funds (see the video below). 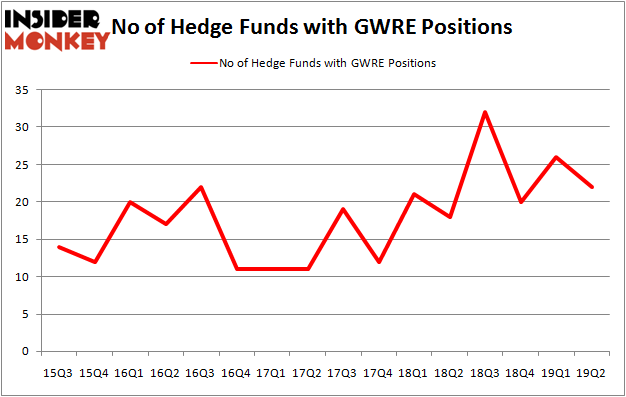 At Q2’s end, a total of 22 of the hedge funds tracked by Insider Monkey were bullish on this stock, a change of -15% from the previous quarter. On the other hand, there were a total of 18 hedge funds with a bullish position in GWRE a year ago. With hedgies’ positions undergoing their usual ebb and flow, there exists a few notable hedge fund managers who were increasing their holdings meaningfully (or already accumulated large positions).

The largest stake in Guidewire Software Inc (NYSE:GWRE) was held by D1 Capital Partners, which reported holding $238.8 million worth of stock at the end of March. It was followed by Stockbridge Partners with a $212.1 million position. Other investors bullish on the company included Cadian Capital, Shannon River Fund Management, and Bares Capital Management.

Due to the fact that Guidewire Software Inc (NYSE:GWRE) has witnessed falling interest from the entirety of the hedge funds we track, it’s easy to see that there lies a certain “tier” of money managers who were dropping their full holdings in the second quarter. Intriguingly, Keith Meister’s Corvex Capital sold off the biggest stake of the 750 funds followed by Insider Monkey, valued at close to $37.5 million in stock, and Guy Shahar’s DSAM Partners was right behind this move, as the fund said goodbye to about $23.1 million worth. These bearish behaviors are important to note, as total hedge fund interest fell by 4 funds in the second quarter.

Let’s go over hedge fund activity in other stocks – not necessarily in the same industry as Guidewire Software Inc (NYSE:GWRE) but similarly valued. We will take a look at ICON Public Limited Company (NASDAQ:ICLR), Woori Financial Group Inc. (NYSE:WF), Coupa Software Incorporated (NASDAQ:COUP), and ON Semiconductor Corporation (NASDAQ:ON). This group of stocks’ market values are closest to GWRE’s market value.

As you can see these stocks had an average of 25.75 hedge funds with bullish positions and the average amount invested in these stocks was $897 million. That figure was $692 million in GWRE’s case. Coupa Software Incorporated (NASDAQ:COUP) is the most popular stock in this table. On the other hand Woori Financial Group Inc. (NYSE:WF) is the least popular one with only 1 bullish hedge fund positions. Guidewire Software Inc (NYSE:GWRE) is not the least popular stock in this group but hedge fund interest is still below average. Our calculations showed that top 20 most popular stocks among hedge funds returned 24.4% in 2019 through September 30th and outperformed the S&P 500 ETF (SPY) by 4 percentage points. A small number of hedge funds were also right about betting on GWRE, though not to the same extent, as the stock returned 3.9% during the third quarter and outperformed the market.