Concerns over rising interest rates and expected further rate increases have hit several stocks hard during the fourth quarter. NASDAQ and Russell 2000 indices were already in correction territory. More importantly, Russell 2000 ETF (IWM) underperformed the larger S&P 500 ETF (SPY) by nearly 7 percentage points in the fourth quarter. Hedge funds and institutional investors tracked by Insider Monkey usually invest a disproportionate amount of their portfolios in smaller cap stocks. We have been receiving indications that hedge funds were paring back their overall exposure and this is one of the factors behind the recent movements in major indices. In this article, we will take a closer look at hedge fund sentiment towards Grupo Financiero Galicia S.A. (NASDAQ:GGAL).

Grupo Financiero Galicia S.A. (NASDAQ:GGAL) shareholders have witnessed an increase in support from the world’s most elite money managers of late. GGAL was in 19 hedge funds’ portfolios at the end of December. There were 15 hedge funds in our database with GGAL positions at the end of the previous quarter. Our calculations also showed that GGAL isn’t among the 30 most popular stocks among hedge funds.

In the eyes of most traders, hedge funds are seen as unimportant, outdated investment vehicles of the past. While there are greater than 8000 funds in operation at the moment, We choose to focus on the top tier of this club, approximately 750 funds. These investment experts have their hands on most of all hedge funds’ total asset base, and by keeping track of their finest investments, Insider Monkey has unsheathed numerous investment strategies that have historically outrun the market. Insider Monkey’s flagship hedge fund strategy beat the S&P 500 index by nearly 5 percentage points per annum since its inception in May 2014 through early November 2018. We were able to generate large returns even by identifying short candidates. Our portfolio of short stocks lost 27.5% since February 2017 (through March 12th) even though the market was up nearly 25% during the same period. We just shared a list of 6 short targets in our latest quarterly update and they are already down an average of 6% in less than a month.

What does the smart money think about Grupo Financiero Galicia S.A. (NASDAQ:GGAL)? 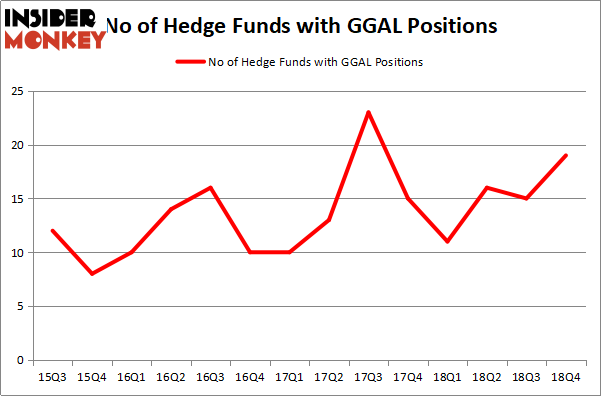 Among these funds, EMS Capital held the most valuable stake in Grupo Financiero Galicia S.A. (NASDAQ:GGAL), which was worth $28.9 million at the end of the third quarter. On the second spot was Prince Street Capital Management which amassed $20.2 million worth of shares. Moreover, Odey Asset Management Group, Driehaus Capital, and Horseman Capital Management were also bullish on Grupo Financiero Galicia S.A. (NASDAQ:GGAL), allocating a large percentage of their portfolios to this stock.

With a general bullishness amongst the heavyweights, key hedge funds have been driving this bullishness. Driehaus Capital, managed by Richard Driehaus, initiated the biggest position in Grupo Financiero Galicia S.A. (NASDAQ:GGAL). Driehaus Capital had $15.7 million invested in the company at the end of the quarter. John Horseman’s Horseman Capital Management also made a $9.8 million investment in the stock during the quarter. The other funds with brand new GGAL positions are Robert Charles Gibbins’s Autonomy Capital, Joshua Friedman and Mitchell Julis’s Canyon Capital Advisors, and James Dondero’s Highland Capital Management.

As you can see these stocks had an average of 19.25 hedge funds with bullish positions and the average amount invested in these stocks was $305 million. That figure was $133 million in GGAL’s case. InterXion Holding NV (NYSE:INXN) is the most popular stock in this table. On the other hand EnLink Midstream Partners LP (NYSE:ENLK) is the least popular one with only 6 bullish hedge fund positions. Grupo Financiero Galicia S.A. (NASDAQ:GGAL) is not the least popular stock in this group but hedge fund interest is still below average. This is a slightly negative signal and we’d rather spend our time researching stocks that hedge funds are piling on. Our calculations showed that top 15 most popular stocks) among hedge funds returned 24.2% through April 22nd and outperformed the S&P 500 ETF (SPY) by more than 7 percentage points. Unfortunately GGAL wasn’t nearly as popular as these 15 stock (hedge fund sentiment was quite bearish); GGAL investors were disappointed as the stock returned -11.8% and underperformed the market. If you are interested in investing in large cap stocks with huge upside potential, you should check out the top 15 most popular stocks) among hedge funds as 13 of these stocks already outperformed the market this year.