The government requires hedge funds and wealthy investors with over a certain portfolio size to file a report that shows their positions at the end of every quarter. Even though it isn’t the intention, these filings level the playing field for ordinary investors. The latest round of 13F filings disclosed the funds’ positions on September 30. We at Insider Monkey have made an extensive database of more than 700 of those elite funds and prominent investors’ filings. In this article, we analyze how these elite funds and prominent investors traded Grupo Financiero Galicia S.A. (NASDAQ:GGAL) based on those filings.

Is Grupo Financiero Galicia S.A. (NASDAQ:GGAL) the right pick for your portfolio? Hedge funds are in a pessimistic mood. The number of long hedge fund bets were trimmed by 1 recently. Our calculations also showed that GGAL isn’t among the 30 most popular stocks among hedge funds. GGAL was in 15 hedge funds’ portfolios at the end of the third quarter of 2018. There were 16 hedge funds in our database with GGAL positions at the end of the previous quarter.

What does the smart money think about Grupo Financiero Galicia S.A. (NASDAQ:GGAL)?

Heading into the fourth quarter of 2018, a total of 15 of the hedge funds tracked by Insider Monkey held long positions in this stock, a change of -6% from one quarter earlier. Below, you can check out the change in hedge fund sentiment towards GGAL over the last 13 quarters. So, let’s review which hedge funds were among the top holders of the stock and which hedge funds were making big moves. 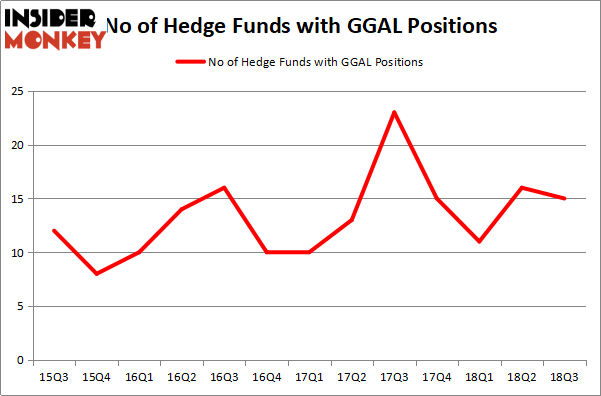 More specifically, EMS Capital was the largest shareholder of Grupo Financiero Galicia S.A. (NASDAQ:GGAL), with a stake worth $26.7 million reported as of the end of September. Trailing EMS Capital was Prince Street Capital Management, which amassed a stake valued at $15.4 million. Odey Asset Management Group, LMR Partners, and Discovery Capital Management were also very fond of the stock, giving the stock large weights in their portfolios.

Since Grupo Financiero Galicia S.A. (NASDAQ:GGAL) has witnessed declining sentiment from the entirety of the hedge funds we track, we can see that there was a specific group of fund managers that decided to sell off their entire stakes last quarter. Intriguingly, Ryan Pedlow’s Two Creeks Capital Management cut the largest position of the “upper crust” of funds watched by Insider Monkey, valued at an estimated $11.4 million in stock. Miguel Fidalgo’s fund, Triarii Capital, also dropped its stock, about $2.1 million worth. These transactions are interesting, as total hedge fund interest was cut by 1 funds last quarter.

As you can see these stocks had an average of 19 hedge funds with bullish positions and the average amount invested in these stocks was $232 million. That figure was $85 million in GGAL’s case. Magnolia Oil & Gas Corporation (NYSE:MGY) is the most popular stock in this table. On the other hand Balchem Corporation (NASDAQ:BCPC) is the least popular one with only 8 bullish hedge fund positions. Grupo Financiero Galicia S.A. (NASDAQ:GGAL) is not the least popular stock in this group but hedge fund interest is still below average. This is a slightly negative signal and we’d rather spend our time researching stocks that hedge funds are piling on. In this regard MGY might be a better candidate to consider a long position.