As we already know from media reports and hedge fund investor letters, hedge funds delivered their best returns in a decade. Most investors who decided to stick with hedge funds after a rough 2018 recouped their losses by the end of the second quarter. We get to see hedge funds’ thoughts towards the market and individual stocks by aggregating their quarterly portfolio movements and reading their investor letters. In this article, we will particularly take a look at what hedge funds think about Graphic Packaging Holding Company (NYSE:GPK).

Graphic Packaging Holding Company (NYSE:GPK) was in 30 hedge funds’ portfolios at the end of June. GPK shareholders have witnessed an increase in support from the world’s most elite money managers of late. There were 24 hedge funds in our database with GPK holdings at the end of the previous quarter. Our calculations also showed that GPK isn’t among the 30 most popular stocks among hedge funds (view the video below). 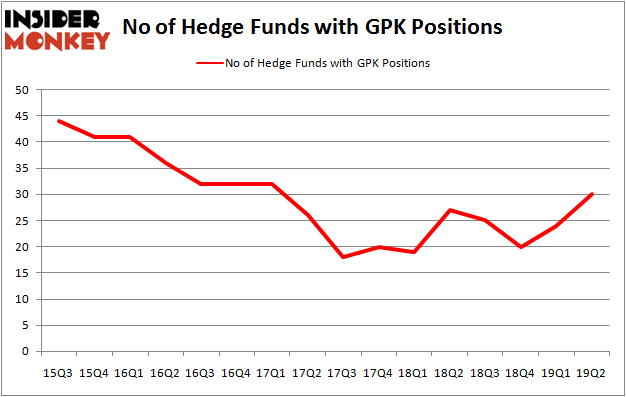 At the end of the second quarter, a total of 30 of the hedge funds tracked by Insider Monkey held long positions in this stock, a change of 25% from one quarter earlier. Below, you can check out the change in hedge fund sentiment towards GPK over the last 16 quarters. With hedge funds’ capital changing hands, there exists an “upper tier” of notable hedge fund managers who were boosting their holdings considerably (or already accumulated large positions).

The largest stake in Graphic Packaging Holding Company (NYSE:GPK) was held by Citadel Investment Group, which reported holding $161.6 million worth of stock at the end of March. It was followed by Eminence Capital with a $119 million position. Other investors bullish on the company included Millennium Management, Maverick Capital, and D E Shaw.

As you can see these stocks had an average of 17.5 hedge funds with bullish positions and the average amount invested in these stocks was $256 million. That figure was $534 million in GPK’s case. Ryman Hospitality Properties, Inc. (NYSE:RHP) is the most popular stock in this table. On the other hand Healthcare Realty Trust Inc (NYSE:HR) is the least popular one with only 9 bullish hedge fund positions. Compared to these stocks Graphic Packaging Holding Company (NYSE:GPK) is more popular among hedge funds. Our calculations showed that top 20 most popular stocks among hedge funds returned 24.4% in 2019 through September 30th and outperformed the S&P 500 ETF (SPY) by 4 percentage points. Hedge funds were also right about betting on GPK as the stock returned 6.1% during Q3 and outperformed the market by an even larger margin. Hedge funds were clearly right about piling into this stock relative to other stocks with similar market capitalizations.