The Insider Monkey team has completed processing the quarterly 13F filings for the September quarter submitted by the hedge funds and other money managers included in our extensive database. Most hedge fund investors endured a torrid quarter, which certainly propelled them to adjust their equity holdings so as to maintain the desired risk profile. As a result, the relevancy of these public filings and their content is indisputable, as they may reveal numerous high-potential stocks. The following article will discuss the smart money sentiment towards Graphic Packaging Holding Company (NYSE:GPK).

Is Graphic Packaging Holding Company (NYSE:GPK) the right pick for your portfolio? Investors who are in the know are becoming less hopeful. The number of long hedge fund positions decreased by 2 lately. Our calculations also showed that GPK isn’t among the 30 most popular stocks among hedge funds. GPK was in 25 hedge funds’ portfolios at the end of September. There were 27 hedge funds in our database with GPK positions at the end of the previous quarter.

How have hedgies been trading Graphic Packaging Holding Company (NYSE:GPK)?

Heading into the fourth quarter of 2018, a total of 25 of the hedge funds tracked by Insider Monkey were long this stock, a change of -7% from the second quarter of 2018. The graph below displays the number of hedge funds with bullish position in GPK over the last 13 quarters. With hedgies’ capital changing hands, there exists a few key hedge fund managers who were upping their holdings substantially (or already accumulated large positions). 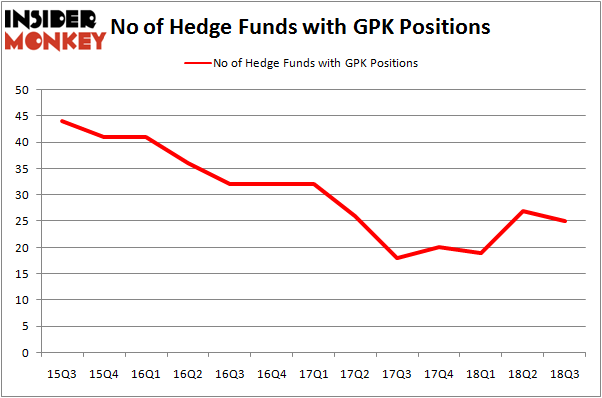 When looking at the institutional investors followed by Insider Monkey, Canyon Capital Advisors, managed by Joshua Friedman and Mitchell Julis, holds the most valuable position in Graphic Packaging Holding Company (NYSE:GPK). Canyon Capital Advisors has a $217.2 million position in the stock, comprising 3% of its 13F portfolio. Sitting at the No. 2 spot is Israel Englander of Millennium Management, with a $84.5 million position; 0.1% of its 13F portfolio is allocated to the stock. Other professional money managers with similar optimism encompass Malcolm Fairbairn’s Ascend Capital, Lee Ainslie’s Maverick Capital and Ken Griffin’s Citadel Investment Group.

Seeing as Graphic Packaging Holding Company (NYSE:GPK) has witnessed declining sentiment from the smart money, logic holds that there was a specific group of funds that decided to sell off their full holdings heading into Q3. At the top of the heap, Anand Parekh’s Alyeska Investment Group dumped the biggest investment of the 700 funds followed by Insider Monkey, totaling an estimated $14.1 million in stock, and John Overdeck and David Siegel’s Two Sigma Advisors was right behind this move, as the fund sold off about $11.3 million worth. These moves are interesting, as total hedge fund interest was cut by 2 funds heading into Q3.

As you can see these stocks had an average of 26.5 hedge funds with bullish positions and the average amount invested in these stocks was $871 million. That figure was $771 million in GPK’s case. Peabody Energy Corporation (NYSE:BTU) is the most popular stock in this table. On the other hand Seaboard Corporation (NYSE:SEB) is the least popular one with only 9 bullish hedge fund positions. Graphic Packaging Holding Company (NYSE:GPK) is not the least popular stock in this group but hedge fund interest is still below average. This is a slightly negative signal and we’d rather spend our time researching stocks that hedge funds are piling on. In this regard BTU might be a better candidate to consider a long position.