Is Gentherm Inc (THRM) The Right Stock To Buy ?

Looking for stocks with high upside potential? Just follow the big players within the hedge fund industry. Why should you do so? Let’s take a brief look at what statistics have to say about hedge funds’ stock picking abilities to illustrate. The Standard and Poor’s 500 Index returned approximately 12.1% in 2019 (through May 30th). Conversely, hedge funds’ 20 preferred S&P 500 stocks generated a return of 18.7% during the same period, with the majority of these stock picks outperforming the broader market benchmark. Coincidence? It might happen to be so, but it is unlikely. Our research covering the last 18 years indicates that hedge funds’ stock picks generate superior risk-adjusted returns. That’s why we believe it is wise to check hedge fund activity before you invest your time or your savings on a stock like Gentherm Inc (NASDAQ:THRM).

Is Gentherm Inc (NASDAQ:THRM) a bargain? Prominent investors are getting more optimistic. The number of bullish hedge fund bets moved up by 2 recently. Our calculations also showed that thrm isn’t among the 30 most popular stocks among hedge funds. THRM was in 19 hedge funds’ portfolios at the end of the first quarter of 2019. There were 17 hedge funds in our database with THRM positions at the end of the previous quarter.

Heading into the second quarter of 2019, a total of 19 of the hedge funds tracked by Insider Monkey held long positions in this stock, a change of 12% from one quarter earlier. The graph below displays the number of hedge funds with bullish position in THRM over the last 15 quarters. So, let’s review which hedge funds were among the top holders of the stock and which hedge funds were making big moves. 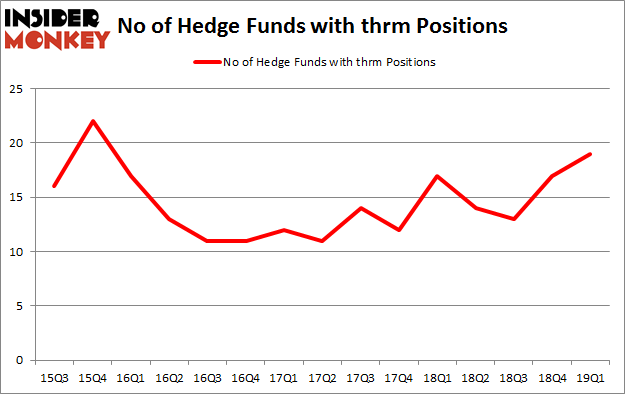 When looking at the institutional investors followed by Insider Monkey, Trigran Investments, managed by Douglas T. Granat, holds the biggest position in Gentherm Inc (NASDAQ:THRM). Trigran Investments has a $41 million position in the stock, comprising 7% of its 13F portfolio. Sitting at the No. 2 spot is Eli Cohen of Crescent Park Management, with a $7.7 million position; the fund has 1.4% of its 13F portfolio invested in the stock. Some other hedge funds and institutional investors that hold long positions comprise Richard McGuire’s Marcato Capital Management, Israel Englander’s Millennium Management and Peter Rathjens, Bruce Clarke and John Campbell’s Arrowstreet Capital.

As one would reasonably expect, specific money managers were leading the bulls’ herd. Crescent Park Management, managed by Eli Cohen, created the most valuable position in Gentherm Inc (NASDAQ:THRM). Crescent Park Management had $7.7 million invested in the company at the end of the quarter. Peter Rathjens, Bruce Clarke and John Campbell’s Arrowstreet Capital also initiated a $3.7 million position during the quarter. The other funds with brand new THRM positions are Sahm Adrangi’s Kerrisdale Capital, Noam Gottesman’s GLG Partners, and Jim Simons’s Renaissance Technologies.

As you can see these stocks had an average of 13 hedge funds with bullish positions and the average amount invested in these stocks was $78 million. That figure was $75 million in THRM’s case. The Marcus Corporation (NYSE:MCS) is the most popular stock in this table. On the other hand Camping World Holdings, Inc. (NYSE:CWH) is the least popular one with only 10 bullish hedge fund positions. Compared to these stocks Gentherm Inc (NASDAQ:THRM) is more popular among hedge funds. Our calculations showed that top 20 most popular stocks among hedge funds returned 1.9% in Q2 through May 30th and outperformed the S&P 500 ETF (SPY) by more than 3 percentage points. Hedge funds were also right about betting on THRM as the stock returned 6% during the same period and outperformed the market by an even larger margin. Hedge funds were clearly right about piling into this stock relative to other stocks with similar market capitalizations.