Is Franco-Nevada Corporation (FNV) A Good Stock To Buy?

While the market driven by short-term sentiment influenced by the accomodative interest rate environment in the US, increasing oil prices and deteriorating expectations towards the resolution of the trade war with China, many smart money investors kept their cautious approach regarding the current bull run in the second quarter and hedging or reducing many of their long positions. Some fund managers like this one are betting on Dow hitting 40,000 to generate strong returns. However, as we know, big investors usually buy stocks with strong fundamentals that can deliver gains both in bull and bear markets, which is why we believe we can profit from imitating them. In this article, we are going to take a look at the smart money sentiment surrounding Franco-Nevada Corporation (NYSE:FNV).

Is Franco-Nevada Corporation (NYSE:FNV) worth your attention right now? Hedge funds are becoming less confident. The number of long hedge fund bets shrunk by 1 recently. Our calculations also showed that FNV isn’t among the 30 most popular stocks among hedge funds (see the video below). FNV was in 18 hedge funds’ portfolios at the end of the second quarter of 2019. There were 19 hedge funds in our database with FNV holdings at the end of the previous quarter.

According to most traders, hedge funds are seen as slow, old investment tools of the past. While there are over 8000 funds in operation at present, We hone in on the aristocrats of this group, approximately 750 funds. These investment experts shepherd the lion’s share of the smart money’s total capital, and by keeping an eye on their first-class stock picks, Insider Monkey has unsheathed various investment strategies that have historically outrun the market. Insider Monkey’s flagship hedge fund strategy outperformed the S&P 500 index by around 5 percentage points annually since its inception in May 2014. We were able to generate large returns even by identifying short candidates. Our portfolio of short stocks lost 25.7% since February 2017 (through September 30th) even though the market was up more than 33% during the same period. We just shared a list of 10 short targets in our latest quarterly update . 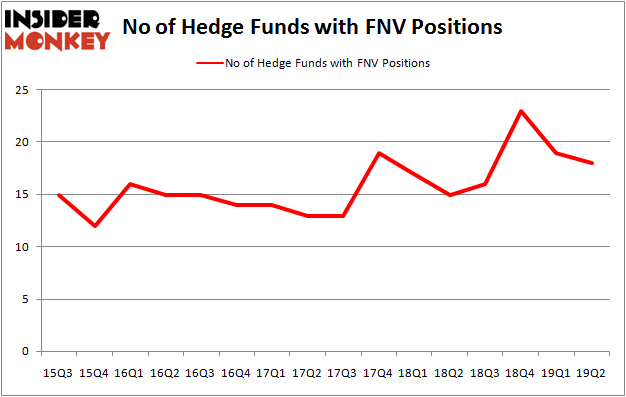 Unlike some fund managers who are betting on Dow reaching 40000 in a year, our long-short investment strategy doesn’t rely on bull markets to deliver double digit returns. We only rely on hedge fund buy/sell signals. Let’s go over the recent hedge fund action encompassing Franco-Nevada Corporation (NYSE:FNV).

At the end of the second quarter, a total of 18 of the hedge funds tracked by Insider Monkey held long positions in this stock, a change of -5% from the previous quarter. Below, you can check out the change in hedge fund sentiment towards FNV over the last 16 quarters. With hedgies’ capital changing hands, there exists a select group of key hedge fund managers who were increasing their holdings considerably (or already accumulated large positions).

More specifically, Renaissance Technologies was the largest shareholder of Franco-Nevada Corporation (NYSE:FNV), with a stake worth $311.9 million reported as of the end of March. Trailing Renaissance Technologies was Horizon Asset Management, which amassed a stake valued at $88.1 million. GLG Partners, Royce & Associates, and PEAK6 Capital Management were also very fond of the stock, giving the stock large weights in their portfolios.

Because Franco-Nevada Corporation (NYSE:FNV) has faced bearish sentiment from the entirety of the hedge funds we track, it’s easy to see that there was a specific group of hedge funds that slashed their entire stakes in the second quarter. Intriguingly, Cliff Asness’s AQR Capital Management cut the biggest stake of the “upper crust” of funds followed by Insider Monkey, valued at close to $63.5 million in call options, and Sander Gerber’s Hudson Bay Capital Management was right behind this move, as the fund said goodbye to about $12.6 million worth. These transactions are intriguing to say the least, as aggregate hedge fund interest dropped by 1 funds in the second quarter.

As you can see these stocks had an average of 26.25 hedge funds with bullish positions and the average amount invested in these stocks was $835 million. That figure was $533 million in FNV’s case. Lennar Corporation (NYSE:LEN) is the most popular stock in this table. On the other hand WPP plc (NYSE:WPP) is the least popular one with only 3 bullish hedge fund positions. Franco-Nevada Corporation (NYSE:FNV) is not the least popular stock in this group but hedge fund interest is still below average. Our calculations showed that top 20 most popular stocks among hedge funds returned 24.4% in 2019 through September 30th and outperformed the S&P 500 ETF (SPY) by 4 percentage points. A small number of hedge funds were also right about betting on FNV as the stock returned 7.7% during the same time frame and outperformed the market by an even larger margin.