Is Exelon Corporation (EXC) Going to Burn These Hedge Funds?

After a lengthy stretch of outperformance, small-cap stocks suffered from July 2015 through June 2016, as heightened global economic fears led investors to flee to the safe havens of large-cap stocks and other instruments. Those stocks outperformed small-caps by about 10 percentage points during that time, with small-cap healthcare stocks being particularly hard hit. However, the tide has since turned in a big way, as evidenced by small-caps toppling their large-cap peers by 5 percentage points in the third quarter, and by another 5 percentage points in the first seven weeks of the fourth quarter. In this article, we’ll analyze how this shift affected hedge funds’ Q3 trading of Exelon Corporation (NYSE:EXC) and see how the stock is affected by the recent hedge fund activity.

Is Exelon Corporation (NYSE:EXC) a bargain? Hedge funds are getting less optimistic. The number of bullish hedge fund bets shrunk by 2 recently. EXC was in 25 hedge funds’ portfolios at the end of the third quarter of 2016. There were 27 hedge funds in our database with EXC holdings at the end of the previous quarter. At the end of this article we will also compare EXC to other stocks including Praxair, Inc. (NYSE:PX), Barclays PLC (ADR) (NYSE:BCS), and TransCanada Corporation (USA) (NYSE:TRP) to get a better sense of its popularity.

Heading into the fourth quarter of 2016, a total of 25 of the hedge funds tracked by Insider Monkey held long positions in this stock, a decrease of 7% from the previous quarter. With the smart money’s positions undergoing their usual ebb and flow, there exists an “upper tier” of noteworthy hedge fund managers who were boosting their stakes significantly (or already accumulated large positions). 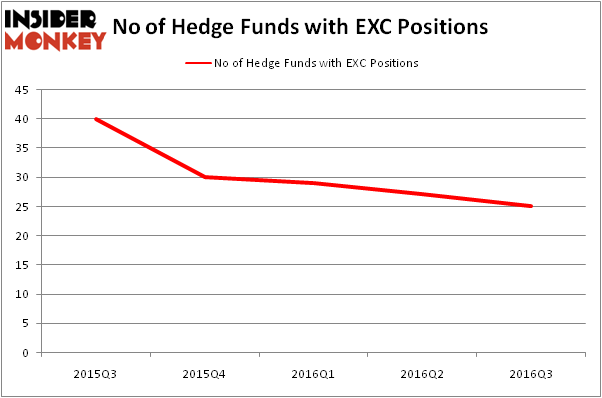 Of the funds tracked by Insider Monkey, Peter Rathjens, Bruce Clarke and John Campbell’s Arrowstreet Capital has the most valuable position in Exelon Corporation (NYSE:EXC), worth close to $212.8 million, accounting for 0.7% of its total 13F portfolio. On Arrowstreet Capital’s heels is Cliff Asness of AQR Capital Management, with a $180.3 million position; 0.3% of its 13F portfolio is allocated to the stock. Other professional money managers with similar optimism contain Israel Englander’s Millennium Management, D. E. Shaw’s D E Shaw and Joe Huber’s Huber Capital Management.

Due to the fact that Exelon Corporation (NYSE:EXC) has witnessed a decline in interest from the entirety of the hedge funds we track, it’s safe to say that there was a specific group of hedge funds that decided to sell off their positions entirely by the end of the third quarter. Intriguingly, Dmitry Balyasny’s Balyasny Asset Management cut the largest position of the 700 funds watched by Insider Monkey, comprising about $70.7 million in stock. Jonathan Barrett and Paul Segal’s fund, Luminus Management, also dumped its stock, about $27.8 million worth of EXC shares. These transactions are interesting, as aggregate hedge fund interest dropped by 2 funds by the end of the third quarter.

As you can see these stocks had an average of 28 hedge funds with bullish positions and the average amount invested in these stocks was $886 million. That figure was $782 million in EXC’s case. LyondellBasell Industries NV (NYSE:LYB) is the most popular stock in this table. On the other hand Barclays PLC (ADR) (NYSE:BCS) and TransCanada Corporation (USA) (NYSE:TRP) are the least popular ones with only 14 bullish hedge fund positions each. Exelon Corporation (NYSE:EXC) is not the least popular stock in this group but hedge fund interest is still below average. This is a slightly negative signal and we’d rather spend our time researching stocks that hedge funds are piling on. In this regard LYB might be a better candidate to consider a long position.