Is Equity Commonwealth (EQC) A Good Stock To Buy ?

The latest 13F reporting period has come and gone, and Insider Monkey is again at the forefront when it comes to making use of this gold mine of data. We have processed the filings of the more than 700 world-class investment firms that we track and now have access to the collective wisdom contained in these filings, which are based on their December 31 holdings, data that is available nowhere else. Should you consider Equity Commonwealth (NYSE:EQC) for your portfolio? We’ll look to this invaluable collective wisdom for the answer.

Equity Commonwealth (NYSE:EQC) shares haven’t seen a lot of action during the third quarter. Overall, hedge fund sentiment was unchanged. The stock was in 17 hedge funds’ portfolios at the end of the fourth quarter of 2018. The level and the change in hedge fund popularity aren’t the only variables you need to analyze to decipher hedge funds’ perspectives. A stock may witness a boost in popularity but it may still be less popular than similarly priced stocks. That’s why at the end of this article we will examine companies such as First Industrial Realty Trust, Inc. (NYSE:FR), Valvoline Inc. (NYSE:VVV), and Nexstar Media Group, Inc. (NASDAQ:NXST) to gather more data points.

What does the smart money think about Equity Commonwealth (NYSE:EQC)?

At Q4’s end, a total of 17 of the hedge funds tracked by Insider Monkey were long this stock, a change of 0% from the second quarter of 2018. On the other hand, there were a total of 21 hedge funds with a bullish position in EQC a year ago. With hedgies’ positions undergoing their usual ebb and flow, there exists a select group of key hedge fund managers who were increasing their holdings meaningfully (or already accumulated large positions). 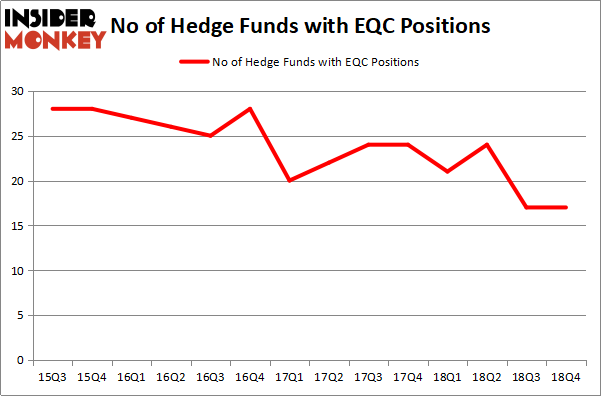 More specifically, Renaissance Technologies was the largest shareholder of Equity Commonwealth (NYSE:EQC), with a stake worth $71.2 million reported as of the end of September. Trailing Renaissance Technologies was Hudson Way Capital Management, which amassed a stake valued at $31.9 million. Arrowstreet Capital, Governors Lane, and D E Shaw were also very fond of the stock, giving the stock large weights in their portfolios.

Since Equity Commonwealth (NYSE:EQC) has witnessed declining sentiment from the entirety of the hedge funds we track, we can see that there exists a select few hedge funds who sold off their full holdings by the end of the third quarter. Interestingly, Noam Gottesman’s GLG Partners said goodbye to the largest position of all the hedgies tracked by Insider Monkey, totaling about $14.2 million in stock, and David Zusman’s Talara Capital Management was right behind this move, as the fund dumped about $12.9 million worth. These moves are interesting, as total hedge fund interest stayed the same (this is a bearish signal in our experience).

As you can see these stocks had an average of 24 hedge funds with bullish positions and the average amount invested in these stocks was $649 million. That figure was $212 million in EQC’s case. Nexstar Media Group, Inc. (NASDAQ:NXST) is the most popular stock in this table. On the other hand First Industrial Realty Trust, Inc. (NYSE:FR) is the least popular one with only 18 bullish hedge fund positions. Compared to these stocks Equity Commonwealth (NYSE:EQC) is even less popular than FR. Hedge funds dodged a bullet by taking a bearish stance towards EQC. Our calculations showed that the top 15 most popular hedge fund stocks returned 24.2% through April 22nd and outperformed the S&P 500 ETF (SPY) by more than 7 percentage points. Unfortunately EQC wasn’t nearly as popular as these 15 stock (hedge fund sentiment was very bearish); EQC investors were disappointed as the stock returned 3.9% and underperformed the market. If you are interested in investing in large cap stocks with huge upside potential, you should check out the top 15 most popular stocks) among hedge funds as 13 of these stocks already outperformed the market this year.