It was a rough fourth quarter for many hedge funds, which were naturally unable to overcome the big dip in the broad market, as the S&P 500 fell by about 4.8% during 2018 and average hedge fund losing about 1%. The Russell 2000, composed of smaller companies, performed even worse, trailing the S&P by more than 6 percentage points, as investors fled less-known quantities for safe havens. Luckily hedge funds were shifting their holdings into large-cap stocks. The 20 most popular hedge fund stocks actually generated an average return of 24.4% during the first 9 months of 2019 and outperformed the S&P 500 ETF by 4 percentage points. We are done processing the latest 13f filings and in this article we will study how hedge fund sentiment towards Energizer Holdings, Inc. (NYSE:ENR) changed during the first quarter.

Energizer Holdings, Inc. (NYSE:ENR) investors should be aware of a decrease in hedge fund interest in recent months. Our calculations also showed that ENR isn’t among the 30 most popular stocks among hedge funds (view the video below).

In today’s marketplace there are plenty of gauges market participants put to use to appraise their holdings. Some of the less utilized gauges are hedge fund and insider trading interest. Our researchers have shown that, historically, those who follow the best picks of the top money managers can outclass their index-focused peers by a healthy amount (see the details here). 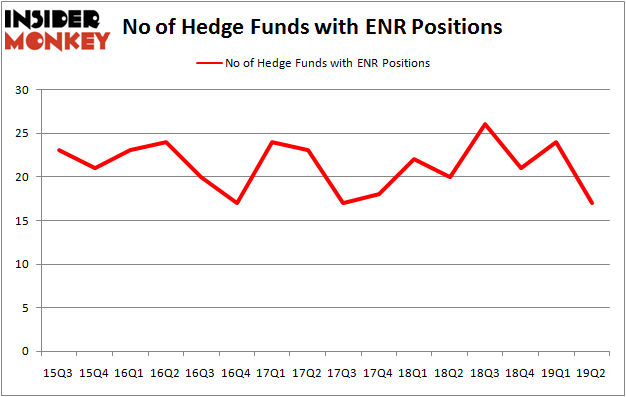 What have hedge funds been doing with Energizer Holdings, Inc. (NYSE:ENR)?

Heading into the third quarter of 2019, a total of 17 of the hedge funds tracked by Insider Monkey were long this stock, a change of -29% from one quarter earlier. On the other hand, there were a total of 20 hedge funds with a bullish position in ENR a year ago. With the smart money’s sentiment swirling, there exists an “upper tier” of key hedge fund managers who were upping their holdings significantly (or already accumulated large positions).

More specifically, GAMCO Investors was the largest shareholder of Energizer Holdings, Inc. (NYSE:ENR), with a stake worth $61.9 million reported as of the end of March. Trailing GAMCO Investors was Armistice Capital, which amassed a stake valued at $52.1 million. Soros Fund Management, Millennium Management, and Balyasny Asset Management were also very fond of the stock, giving the stock large weights in their portfolios.

Since Energizer Holdings, Inc. (NYSE:ENR) has faced a decline in interest from the aggregate hedge fund industry, it’s easy to see that there exists a select few fund managers that decided to sell off their entire stakes in the second quarter. Intriguingly, Renaissance Technologies cut the biggest position of the “upper crust” of funds monitored by Insider Monkey, totaling close to $18 million in stock. Michael Doheny’s fund, Freshford Capital Management, also said goodbye to its stock, about $9 million worth. These bearish behaviors are important to note, as total hedge fund interest was cut by 7 funds in the second quarter.

As you can see these stocks had an average of 13.5 hedge funds with bullish positions and the average amount invested in these stocks was $264 million. That figure was $230 million in ENR’s case. Sotheby’s (NYSE:BID) is the most popular stock in this table. On the other hand Stantec Inc. (NYSE:STN) is the least popular one with only 6 bullish hedge fund positions. Energizer Holdings, Inc. (NYSE:ENR) is not the most popular stock in this group but hedge fund interest is still above average. Our calculations showed that top 20 most popular stocks among hedge funds returned 24.4% in 2019 through September 30th and outperformed the S&P 500 ETF (SPY) by 4 percentage points. Hedge funds were also right about betting on ENR as the stock returned 13.7% during the third quarter and outperformed the market. Hedge funds were rewarded for their relative bullishness.