Is CommVault Systems, Inc. (CVLT) A Good Stock To Buy?

CommVault Systems, Inc. (NASDAQ:CVLT) has experienced a decrease in support from the world’s most elite money managers in recent months. CVLT was in 22 hedge funds’ portfolios at the end of September. There were 23 hedge funds in our database with CVLT positions at the end of the previous quarter. Our calculations also showed that CVLT isn’t among the 30 most popular stocks among hedge funds. 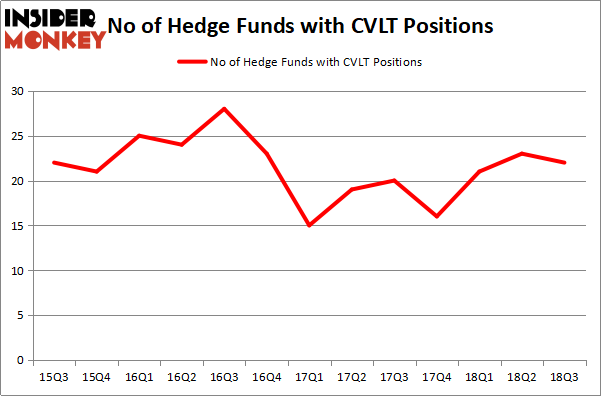 More specifically, Elliott Management was the largest shareholder of CommVault Systems, Inc. (NASDAQ:CVLT), with a stake worth $147 million reported as of the end of September. Trailing Elliott Management was Renaissance Technologies, which amassed a stake valued at $113.5 million. D E Shaw, Lunia Capital, and Garelick Capital Partners were also very fond of the stock, giving the stock large weights in their portfolios.

Since CommVault Systems, Inc. (NASDAQ:CVLT) has faced a decline in interest from the entirety of the hedge funds we track, it’s safe to say that there were a few fund managers that slashed their positions entirely in the third quarter. Intriguingly, Peter Rathjens, Bruce Clarke and John Campbell’s Arrowstreet Capital cut the largest stake of the 700 funds watched by Insider Monkey, valued at an estimated $19.3 million in stock. Charles Davidson and Joseph Jacobs’s fund, Wexford Capital, also cut its stock, about $2.5 million worth. These moves are interesting, as total hedge fund interest fell by 1 funds in the third quarter.

As you can see these stocks had an average of 18 hedge funds with bullish positions and the average amount invested in these stocks was $257 million. That figure was $413 million in CVLT’s case. KLX Inc (NASDAQ:KLXI) is the most popular stock in this table. On the other hand National Health Investors Inc (NYSE:NHI) is the least popular one with only 10 bullish hedge fund positions. CommVault Systems, Inc. (NASDAQ:CVLT) is not the most popular stock in this group but hedge fund interest is still above average. This is a slightly positive signal but we’d rather spend our time researching stocks that hedge funds are piling on. In this regard KLXI might be a better candidate to consider a long position.