Is Cardtronics plc (CATM) A Good Stock To Buy?

There are several ways to beat the market, and investing in small cap stocks has historically been one of them. We like to improve the odds of beating the market further by examining what famous hedge fund operators such as Jeff Ubben, George Soros and Carl Icahn think. Those hedge fund operators make billions of dollars each year by hiring the best and the brightest to do research on stocks, including small cap stocks that big brokerage houses simply don’t cover. Because of Carl Icahn and other elite funds’ exemplary historical records, we pay attention to their small cap picks. In this article, we use hedge fund filing data to analyze Cardtronics plc (NASDAQ:CATM).

Cardtronics plc (NASDAQ:CATM) shares haven’t seen a lot of action during the third quarter. Overall, hedge fund sentiment was unchanged. The stock was in 18 hedge funds’ portfolios at the end of the fourth quarter of 2018. The level and the change in hedge fund popularity aren’t the only variables you need to analyze to decipher hedge funds’ perspectives. A stock may witness a boost in popularity but it may still be less popular than similarly priced stocks. That’s why at the end of this article we will examine companies such as First Busey Corporation (NASDAQ:BUSE), Empresa Distribuidora y Comercializadora Norte Sociedad Anónima (NYSE:EDN), and LivePerson, Inc. (NASDAQ:LPSN) to gather more data points.

How have hedgies been trading Cardtronics plc (NASDAQ:CATM)? 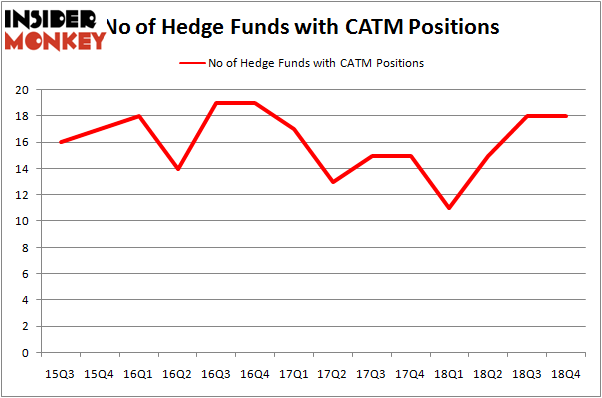 More specifically, Hudson Executive Capital was the largest shareholder of Cardtronics plc (NASDAQ:CATM), with a stake worth $211.3 million reported as of the end of December. Trailing Hudson Executive Capital was Renaissance Technologies, which amassed a stake valued at $19 million. D E Shaw, Two Sigma Advisors, and Winton Capital Management were also very fond of the stock, giving the stock large weights in their portfolios.

Since Cardtronics plc (NASDAQ:CATM) has faced bearish sentiment from the smart money, we can see that there is a sect of funds that decided to sell off their positions entirely by the end of the third quarter. It’s worth mentioning that Noam Gottesman’s GLG Partners said goodbye to the biggest investment of the “upper crust” of funds watched by Insider Monkey, valued at an estimated $2.3 million in stock, and Michael Platt and William Reeves’s BlueCrest Capital Mgmt. was right behind this move, as the fund dropped about $1.4 million worth. These moves are important to note, as aggregate hedge fund interest stayed the same (this is a bearish signal in our experience).

As you can see these stocks had an average of 11 hedge funds with bullish positions and the average amount invested in these stocks was $59 million. That figure was $291 million in CATM’s case. LivePerson, Inc. (NASDAQ:LPSN) is the most popular stock in this table. On the other hand Empresa Distribuidora y Comercializadora Norte Sociedad Anónima (NYSE:EDN) is the least popular one with only 6 bullish hedge fund positions. Compared to these stocks Cardtronics plc (NASDAQ:CATM) is more popular among hedge funds. Our calculations showed that top 15 most popular stocks) among hedge funds returned 24.2% through April 22nd and outperformed the S&P 500 ETF (SPY) by more than 7 percentage points. Hedge funds were also right about betting on CATM as the stock returned 32.3% and outperformed the market by an even larger margin. Hedge funds were clearly right about piling into this stock relative to other stocks with similar market capitalizations.