Does Brookfield Infrastructure Partners L.P. (NYSE:BIP) represent a good buying opportunity at the moment? Let’s quickly check the hedge fund interest towards the company. Hedge fund firms constantly search out bright intellectuals and highly-experienced employees and throw away millions of dollars on satellite photos and other research activities, so it is no wonder why they tend to generate millions in profits each year. It is also true that some hedge fund players fail inconceivably on some occasions, but net net their stock picks have been generating superior risk-adjusted returns on average over the years.

Brookfield Infrastructure Partners L.P. (NYSE:BIP) shares haven’t seen a lot of action during the third quarter. Overall, hedge fund sentiment was unchanged. The stock was in 7 hedge funds’ portfolios at the end of the third quarter of 2019. At the end of this article we will also compare BIP to other stocks including Genuine Parts Company (NYSE:GPC), Franklin Resources, Inc. (NYSE:BEN), and Darden Restaurants, Inc. (NYSE:DRI) to get a better sense of its popularity.

We leave no stone unturned when looking for the next great investment idea. For example Discover is offering this insane cashback card, so we look into shorting the stock. One of the most bullish analysts in America just put his money where his mouth is. He says, “I’m investing more today than I did back in early 2009.” So we check out his pitch. We read hedge fund investor letters and listen to stock pitches at hedge fund conferences. We even check out this option genius’ weekly trade ideas. This December we recommended Adams Energy  based on an under-the-radar fund manager’s investor letter and the stock gained 20 percent. Let’s analyze the key hedge fund action regarding Brookfield Infrastructure Partners L.P. (NYSE:BIP).

At Q3’s end, a total of 7 of the hedge funds tracked by Insider Monkey held long positions in this stock, a change of 0% from the second quarter of 2019. On the other hand, there were a total of 6 hedge funds with a bullish position in BIP a year ago. With hedge funds’ positions undergoing their usual ebb and flow, there exists an “upper tier” of notable hedge fund managers who were adding to their holdings significantly (or already accumulated large positions). 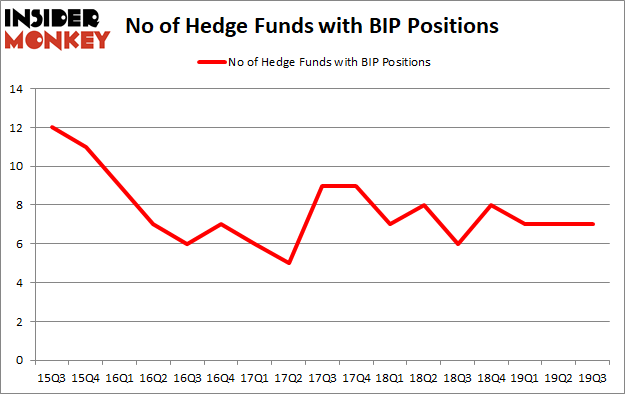 More specifically, Select Equity Group was the largest shareholder of Brookfield Infrastructure Partners L.P. (NYSE:BIP), with a stake worth $33.5 million reported as of the end of September. Trailing Select Equity Group was Two Sigma Advisors, which amassed a stake valued at $8.2 million. Citadel Investment Group, Horizon Asset Management, and Lucas Capital Management were also very fond of the stock, becoming one of the largest hedge fund holders of the company. In terms of the portfolio weights assigned to each position Lucas Capital Management allocated the biggest weight to Brookfield Infrastructure Partners L.P. (NYSE:BIP), around 3.28% of its 13F portfolio. Select Equity Group is also relatively very bullish on the stock, earmarking 0.23 percent of its 13F equity portfolio to BIP.

We view hedge fund activity in the stock unfavorable, but in this case there was only a single hedge fund selling its entire position: Renaissance Technologies. One hedge fund selling its entire position doesn’t always imply a bearish intent. Theoretically a hedge fund may decide to sell a promising position in order to invest the proceeds in a more promising idea. However, we don’t think this is the case in this case because only one of the 800+ hedge funds tracked by Insider Monkey identified as a viable investment and initiated a position in the stock (that fund was Driehaus Capital).

As you can see these stocks had an average of 28.25 hedge funds with bullish positions and the average amount invested in these stocks was $583 million. That figure was $54 million in BIP’s case. Franklin Resources, Inc. (NYSE:BEN) is the most popular stock in this table. On the other hand Genuine Parts Company (NYSE:GPC) is the least popular one with only 20 bullish hedge fund positions. Compared to these stocks Brookfield Infrastructure Partners L.P. (NYSE:BIP) is even less popular than GPC. Our calculations showed that top 20 most popular stocks among hedge funds returned 37.4% in 2019 through the end of November and outperformed the S&P 500 ETF (SPY) by 9.9 percentage points. A small number of hedge funds were also right about betting on BIP, though not to the same extent, as the stock returned 6% during the fourth quarter (through 11/30) and outperformed the market as well.