Hedge fund interest in Brookfield Infrastructure Partners L.P. (NYSE:BIP) shares was flat at the end of last quarter. This is usually a negative indicator. At the end of this article we will also compare BIP to other stocks including Molson Coors Brewing Company (NYSE:TAP), Agnico Eagle Mines Limited (NYSE:AEM), and Cboe Global Markets, Inc. (NASDAQ:CBOE) to get a better sense of its popularity. 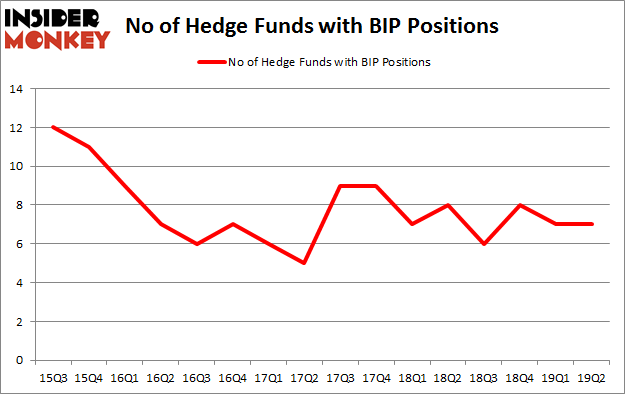 Of the funds tracked by Insider Monkey, Robert Joseph Caruso’s Select Equity Group has the number one position in Brookfield Infrastructure Partners L.P. (NYSE:BIP), worth close to $25.1 million, corresponding to 0.2% of its total 13F portfolio. On Select Equity Group’s heels is Two Sigma Advisors, led by John Overdeck and David Siegel, holding a $6.2 million position; less than 0.1%% of its 13F portfolio is allocated to the stock. Some other peers that hold long positions consist of Renaissance Technologies, Murray Stahl’s Horizon Asset Management and Ken Griffin’s Citadel Investment Group.

Seeing as Brookfield Infrastructure Partners L.P. (NYSE:BIP) has experienced a decline in interest from the entirety of the hedge funds we track, logic holds that there exists a select few hedgies that elected to cut their positions entirely in the second quarter. Intriguingly, Matthew Hulsizer’s PEAK6 Capital Management cut the largest investment of the “upper crust” of funds watched by Insider Monkey, totaling about $1 million in stock. Frederick DiSanto’s fund, Ancora Advisors, also dropped its stock, about $0.4 million worth. These moves are intriguing to say the least, as aggregate hedge fund interest stayed the same (this is a bearish signal in our experience).

As you can see these stocks had an average of 24.5 hedge funds with bullish positions and the average amount invested in these stocks was $575 million. That figure was $45 million in BIP’s case. Agnico Eagle Mines Limited (NYSE:AEM) is the most popular stock in this table. On the other hand Old Dominion Freight Line, Inc. (NASDAQ:ODFL) is the least popular one with only 23 bullish hedge fund positions. Compared to these stocks Brookfield Infrastructure Partners L.P. (NYSE:BIP) is even less popular than ODFL. Hedge funds clearly dropped the ball on BIP as the stock delivered strong returns, though hedge funds’ consensus picks still generated respectable returns. Our calculations showed that top 20 most popular stocks (see the video below) among hedge funds returned 24.4% in 2019 through September 30th and outperformed the S&P 500 ETF (SPY) by 4 percentage points. A small number of hedge funds were also right about betting on BIP as the stock returned 16.8% during the third quarter and outperformed the market by an even larger margin.

The J.M. Smucker Company (SJM: Hedge Funds In Wait-and-See Mode
Monthly Newsletter Strategy
Download a free copy of our newsletter and see the details inside!
Hedge Fund Resource Center
Related News
Should You Avoid Brookfield Infrastructure Partners L.P. (BIP)? Is Brookfield Infrastructure Partners L.P. (BIP) A Good Stock To Buy? The 3 Most Valuable Traits Of Any Winning Stock Centrais Eletricas Brasileiras SA (ADR) (EBR.B): Hedge Funds Are Bearish and Insiders Are Undecided, What Should You Do? Hedge Funds Are Crazy About OGE Energy Corp. (OGE) Is Pinnacle West Capital Corporation (PNW) Going to Burn These Hedge Funds? This Metric Says You Are Smart to Sell SCANA Corporation (SCG) 11 Largest Auto Insurance Companies In The US In 2019 10 Poorest Cities in America in 2019 8 Lowest Tar and Nicotine Cigarette Brands in 2019
Billionaire Hedge Funds