Is BlackLine, Inc. (BL) A Good Stock To Buy?

The latest 13F reporting period has come and gone, and Insider Monkey is again at the forefront when it comes to making use of this gold mine of data. We have processed the filings of the more than 700 world-class investment firms that we track and now have access to the collective wisdom contained in these filings, which are based on their December 31 holdings, data that is available nowhere else. Should you consider BlackLine, Inc. (NASDAQ:BL) for your portfolio? We’ll look to this invaluable collective wisdom for the answer.

BlackLine, Inc. (NASDAQ:BL) shares haven’t seen a lot of action during the third quarter. Overall, hedge fund sentiment was unchanged. The stock was in 13 hedge funds’ portfolios at the end of December. At the end of this article we will also compare BL to other stocks including Fox Factory Holding Corp (NASDAQ:FOXF), Simmons First National Corporation (NASDAQ:SFNC), and Apollo Commercial Real Est. Finance Inc (NYSE:ARI) to get a better sense of its popularity.

We’re going to take a peek at the fresh hedge fund action regarding BlackLine, Inc. (NASDAQ:BL). 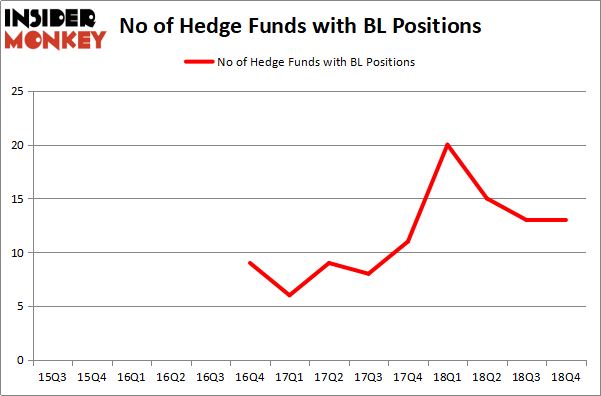 The largest stake in BlackLine, Inc. (NASDAQ:BL) was held by Silver Lake Partners, which reported holding $163.1 million worth of stock at the end of December. It was followed by D E Shaw with a $18.3 million position. Other investors bullish on the company included Segantii Capital, Renaissance Technologies, and Islet Management.

Judging by the fact that BlackLine, Inc. (NASDAQ:BL) has faced falling interest from the smart money, logic holds that there was a specific group of fund managers who were dropping their full holdings heading into Q3. Interestingly, Spencer M. Waxman’s Shannon River Fund Management cut the biggest stake of the “upper crust” of funds followed by Insider Monkey, totaling an estimated $5.5 million in stock. Philip Hempleman’s fund, Ardsley Partners, also cut its stock, about $5.4 million worth. These transactions are interesting, as aggregate hedge fund interest stayed the same (this is a bearish signal in our experience).