Is BHP Group (BHP) Going to Burn These Hedge Funds?

BHP Group (NYSE:BHP) investors should pay attention to a decrease in enthusiasm from smart money of late. BHP was in 15 hedge funds’ portfolios at the end of the fourth quarter of 2018. There were 19 hedge funds in our database with BHP positions at the end of the previous quarter. Our calculations also showed that BHP isn’t among the 30 most popular stocks among hedge funds.

How have hedgies been trading BHP Group (NYSE:BHP)? 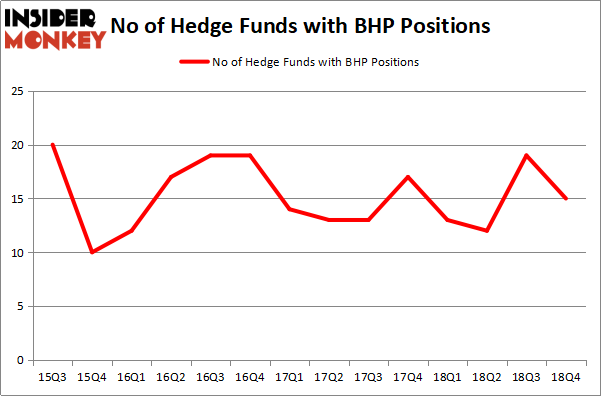 The largest stake in BHP Group (NYSE:BHP) was held by Fisher Asset Management, which reported holding $312.8 million worth of stock at the end of September. It was followed by Arrowstreet Capital with a $175.1 million position. Other investors bullish on the company included Mason Capital Management, Millennium Management, and LMR Partners.

Since BHP Group (NYSE:BHP) has experienced bearish sentiment from the entirety of the hedge funds we track, it’s safe to say that there is a sect of money managers who were dropping their entire stakes in the third quarter. Interestingly, Jim Simons’s Renaissance Technologies dropped the biggest stake of the 700 funds tracked by Insider Monkey, worth close to $12.4 million in stock. Dmitry Balyasny’s fund, Balyasny Asset Management, also said goodbye to its stock, about $9.7 million worth. These transactions are interesting, as aggregate hedge fund interest was cut by 4 funds in the third quarter.

As you can see these stocks had an average of 48.5 hedge funds with bullish positions and the average amount invested in these stocks was $2266 million. That figure was $846 million in BHP’s case. Netflix, Inc. (NASDAQ:NFLX) is the most popular stock in this table. On the other hand PetroChina Company Limited (NYSE:PTR) is the least popular one with only 14 bullish hedge fund positions. BHP Group (NYSE:BHP) is not the least popular stock in this group but hedge fund interest is still below average. Hedge funds missed out investing in this stock during Q1. Our calculations showed that top 15 most popular stocks among hedge funds returned 19.7% through March 15th and outperformed the S&P 500 ETF (SPY) by 6.6 percentage points. Only a few hedge funds were also right about betting on BHP as the stock returned 14.9% and outperformed the market as well.

Were Hedge Funds Right About The Coca-Cola Company (KO)?
Monthly Newsletter Strategy
Download a free copy of our newsletter and see the details inside!
Hedge Fund Resource Center
Related News
Here is What Hedge Funds Think About BHP Group Limited (BHP) This Billionaire’s Fund Returned 30% This Year; Here Are Some of His Top Stock Picks Five Uranium Stocks to Buy According to Hedge Funds BHP Billiton Limited (ADR) (BHP): Smart Money Ownership Remains Underwhelming Here’s Why These Five Stocks Are Trending Today Why Traders Are Watching BHP, Applied Materials, Red Hat and Two Other Stocks on Thursday Here’s Why These Five Stocks Are Trending Ten of the Most Common Addictions 13 African Countries with the Largest White Population in 2018 6 Causes of Human Trafficking in Africa, India, and US
Billionaire Hedge Funds