Most investors tend to think that hedge funds and other asset managers are worthless, as they cannot beat even simple index fund portfolios. In fact, most people expect hedge funds to compete with and outperform the bull market that we have witnessed in recent years. However, hedge funds are generally partially hedged and aim at delivering attractive risk-adjusted returns rather than following the ups and downs of equity markets hoping that they will outperform the broader market. Our research shows that certain hedge funds do have great stock picking skills (and we can identify these hedge funds in advance pretty accurately), so let’s take a glance at the smart money sentiment towards Berry Global Group Inc (NYSE:BERY).

Berry Global Group Inc (NYSE:BERY) shares haven’t seen a lot of action during the second quarter. Overall, hedge fund sentiment was unchanged. The stock was in 40 hedge funds’ portfolios at the end of June. At the end of this article we will also compare BERY to other stocks including Douglas Emmett, Inc. (NYSE:DEI), AerCap Holdings N.V. (NYSE:AER), and Planet Fitness Inc (NYSE:PLNT) to get a better sense of its popularity. Our calculations also showed that BERY isn’t among the 30 most popular stocks among hedge funds (view the video below).

Unlike some fund managers who are betting on Dow reaching 40000 in a year, our long-short investment strategy doesn’t rely on bull markets to deliver double digit returns. We only rely on hedge fund buy/sell signals. We’re going to review the latest hedge fund action regarding Berry Global Group Inc (NYSE:BERY).

At the end of the second quarter, a total of 40 of the hedge funds tracked by Insider Monkey were long this stock, a change of 0% from the first quarter of 2019. Below, you can check out the change in hedge fund sentiment towards BERY over the last 16 quarters. So, let’s find out which hedge funds were among the top holders of the stock and which hedge funds were making big moves. 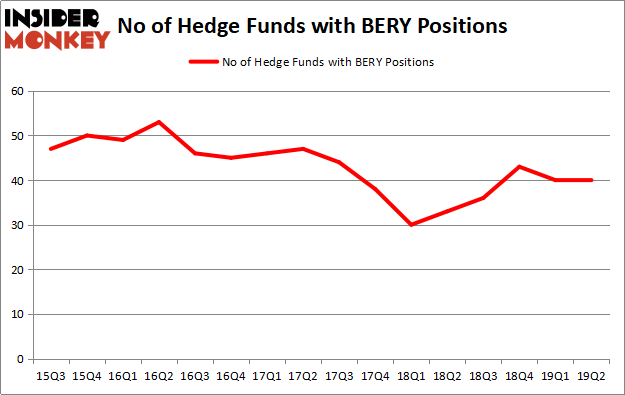 The largest stake in Berry Global Group Inc (NYSE:BERY) was held by Eminence Capital, which reported holding $645.8 million worth of stock at the end of March. It was followed by Orbis Investment Management with a $341 million position. Other investors bullish on the company included Canyon Capital Advisors, Luminus Management, and Viking Global.

Since Berry Global Group Inc (NYSE:BERY) has witnessed falling interest from hedge fund managers, it’s safe to say that there was a specific group of funds who were dropping their positions entirely last quarter. Intriguingly, Scott Ferguson’s Sachem Head Capital dumped the biggest investment of the “upper crust” of funds followed by Insider Monkey, worth an estimated $201.7 million in stock. Jacob Doft’s fund, Highline Capital Management, also sold off its stock, about $92.6 million worth. These transactions are important to note, as aggregate hedge fund interest stayed the same (this is a bearish signal in our experience).

As you can see these stocks had an average of 25.5 hedge funds with bullish positions and the average amount invested in these stocks was $610 million. That figure was $2294 million in BERY’s case. Planet Fitness Inc (NYSE:PLNT) is the most popular stock in this table. On the other hand Hubbell Incorporated (NYSE:HUBB) is the least popular one with only 18 bullish hedge fund positions. Compared to these stocks Berry Global Group Inc (NYSE:BERY) is more popular among hedge funds. Our calculations showed that top 20 most popular stocks among hedge funds returned 24.4% in 2019 through September 30th and outperformed the S&P 500 ETF (SPY) by 4 percentage points. Unfortunately BERY wasn’t nearly as popular as these 20 stocks and hedge funds that were betting on BERY were disappointed as the stock returned -25.3% during the third quarter and underperformed the market. If you are interested in investing in large cap stocks with huge upside potential, you should check out the top 20 most popular stocks among hedge funds as many of these stocks already outperformed the market in Q3.