Is Barclays PLC (NYSE:BCS) A Good Stock To Buy According To Hedge Funds?

Insider Monkey finished processing more than 700 13F filings submitted by hedge funds and prominent investors. These filings show these funds’ portfolio positions as of December 31st, 2018. What do these smart investors think about Barclays PLC (NYSE:BCS)?

Is Barclays PLC (NYSE:BCS) the right pick for your portfolio? The smart money is getting less optimistic. The number of bullish hedge fund positions retreated by 1 lately. Our calculations also showed that BCS isn’t among the 30 most popular stocks among hedge funds. BCS was in 10 hedge funds’ portfolios at the end of December. There were 11 hedge funds in our database with BCS positions at the end of the previous quarter.

We’re going to take a look at the fresh hedge fund action regarding Barclays PLC (NYSE:BCS).

How have hedgies been trading Barclays PLC (NYSE:BCS)?

At the end of the fourth quarter, a total of 10 of the hedge funds tracked by Insider Monkey were long this stock, a change of -9% from one quarter earlier. Below, you can check out the change in hedge fund sentiment towards BCS over the last 14 quarters. With hedgies’ positions undergoing their usual ebb and flow, there exists an “upper tier” of key hedge fund managers who were boosting their holdings significantly (or already accumulated large positions). 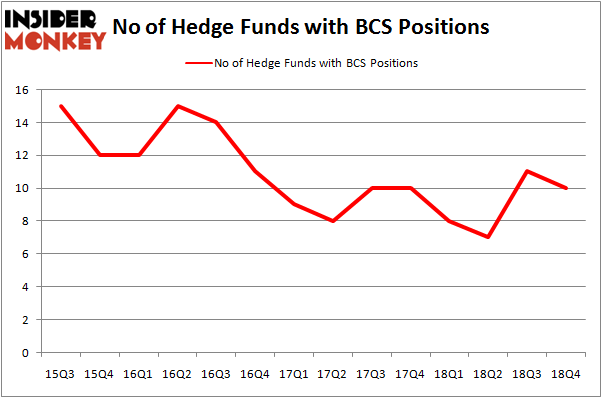 More specifically, Eagle Capital Management was the largest shareholder of Barclays PLC (NYSE:BCS), with a stake worth $175.1 million reported as of the end of September. Trailing Eagle Capital Management was Segantii Capital, which amassed a stake valued at $21.3 million. Arrowstreet Capital, Renaissance Technologies, and HBK Investments were also very fond of the stock, giving the stock large weights in their portfolios.

Judging by the fact that Barclays PLC (NYSE:BCS) has experienced a decline in interest from hedge fund managers, it’s easy to see that there were a few fund managers that slashed their positions entirely heading into Q3. It’s worth mentioning that Paul Marshall and Ian Wace’s Marshall Wace LLP said goodbye to the largest investment of the “upper crust” of funds followed by Insider Monkey, totaling close to $9.5 million in stock, and Ken Griffin’s Citadel Investment Group was right behind this move, as the fund dropped about $2.6 million worth. These bearish behaviors are intriguing to say the least, as total hedge fund interest fell by 1 funds heading into Q3.

As you can see these stocks had an average of 33.75 hedge funds with bullish positions and the average amount invested in these stocks was $1154 million. That figure was $229 million in BCS’s case. ServiceNow Inc (NYSE:NOW) is the most popular stock in this table. On the other hand Koninklijke Philips NV (NYSE:PHG) is the least popular one with only 14 bullish hedge fund positions. Compared to these stocks Barclays PLC (NYSE:BCS) is even less popular than PHG. Our calculations showed that top 15 most popular stocks among hedge funds returned 19.7% through March 15th and outperformed the S&P 500 ETF (SPY) by 6.6 percentage points. Hedge funds were also right about betting on BCS, though not to the same extent, as the stock returned 19.1% and outperformed the market as well.