Is B. Riley Financial, Inc. (RILY) A Good Stock To Buy?

Our extensive research has shown that imitating the smart money can generate significant returns for retail investors, which is why we track nearly 750 active prominent money managers and analyze their quarterly 13F filings. The stocks that are heavily bought by hedge funds historically outperformed the market, though there is no shortage of high profile failures like hedge funds’ 2018 losses in Facebook and Apple. Let’s take a closer look at what the funds we track think about B. Riley Financial, Inc. (NASDAQ:RILY) in this article.

Hedge fund interest in B. Riley Financial, Inc. (NASDAQ:RILY) shares was flat at the end of last quarter. This is usually a negative indicator. At the end of this article we will also compare RILY to other stocks including The First of Long Island Corporation (NASDAQ:FLIC), Heritage Commerce Corp (NASDAQ:HTBK), and Marine Products Corporation (NYSE:MPX) to get a better sense of its popularity. Our calculations also showed that RILY isn’t among the 30 most popular stocks among hedge funds (see the video below).

What does smart money think about B. Riley Financial, Inc. (NASDAQ:RILY)?

At Q2’s end, a total of 10 of the hedge funds tracked by Insider Monkey were long this stock, a change of 0% from the first quarter of 2019. Below, you can check out the change in hedge fund sentiment towards RILY over the last 16 quarters. With hedge funds’ sentiment swirling, there exists an “upper tier” of notable hedge fund managers who were upping their stakes meaningfully (or already accumulated large positions). 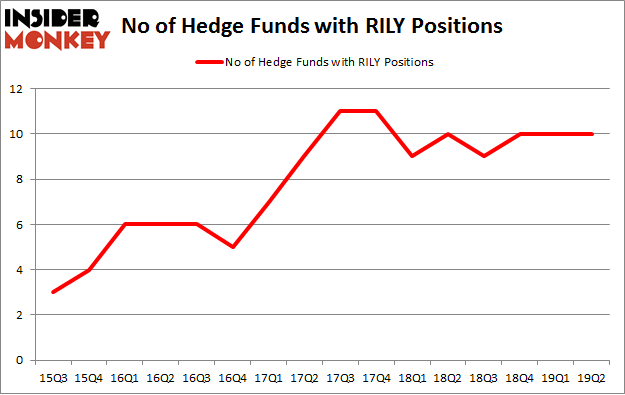 Among these funds, Elliott Management held the most valuable stake in B. Riley Financial, Inc. (NASDAQ:RILY), which was worth $48.1 million at the end of the second quarter. On the second spot was Nokomis Capital which amassed $32.9 million worth of shares. Moreover, Royce & Associates, Tudor Investment Corp, and Manatuck Hill Partners were also bullish on B. Riley Financial, Inc. (NASDAQ:RILY), allocating a large percentage of their portfolios to this stock.

Due to the fact that B. Riley Financial, Inc. (NASDAQ:RILY) has witnessed falling interest from hedge fund managers, we can see that there is a sect of funds that elected to cut their entire stakes heading into Q3. It’s worth mentioning that Ken Griffin’s Citadel Investment Group sold off the largest investment of all the hedgies watched by Insider Monkey, valued at about $0.6 million in stock, and Cliff Asness’s AQR Capital Management was right behind this move, as the fund cut about $0.2 million worth. These moves are intriguing to say the least, as total hedge fund interest stayed the same (this is a bearish signal in our experience).

As you can see these stocks had an average of 9.25 hedge funds with bullish positions and the average amount invested in these stocks was $47 million. That figure was $106 million in RILY’s case. A10 Networks Inc (NYSE:ATEN) is the most popular stock in this table. On the other hand Marine Products Corporation (NYSE:MPX) is the least popular one with only 5 bullish hedge fund positions. B. Riley Financial, Inc. (NASDAQ:RILY) is not the most popular stock in this group but hedge fund interest is still above average. Our calculations showed that top 20 most popular stocks among hedge funds returned 24.4% in 2019 through September 30th and outperformed the S&P 500 ETF (SPY) by 4 percentage points. Hedge funds were also right about betting on RILY as the stock returned 16.1% during the third quarter and outperformed the market. Hedge funds were rewarded for their relative bullishness.

Here’s What Hedge Funds Think About Cara Therapeutics Inc (CARA)
Monthly Newsletter Strategy
Download a free copy of our newsletter and see the details inside!
Hedge Fund Resource Center
Related News
Did Hedge Funds Drop The Ball On B. Riley Financial, Inc. (RILY) ? Is B. Riley Financial Inc (RILY) A Good Stock To Buy? 11 Largest Auto Insurance Companies In The US In 2019 10 Poorest Cities in America in 2019 8 Lowest Tar and Nicotine Cigarette Brands in 2019
Billionaire Hedge Funds