It is already common knowledge that individual investors do not usually have the necessary resources and abilities to properly research an investment opportunity. As a result, most investors pick their illusory “winners” by making a superficial analysis and research that leads to poor performance on aggregate. Since stock returns aren’t usually symmetrically distributed and index returns are more affected by a few outlier stocks (i.e. the FAANG stocks dominating and driving S&P 500 Index’s returns in recent years), more than 50% of the constituents of the Standard and Poor’s 500 Index underperform the benchmark. Hence, if you randomly pick a stock, there is more than 50% chance that you’d fail to beat the market. At the same time, the 15 most favored S&P 500 stocks by the hedge funds monitored by Insider Monkey generated a return of 19.7% during the first 2.5 months of 2019 (vs. 13.1% gain for SPY), with 93% of these stocks outperforming the benchmark. Of course, hedge funds do make wrong bets on some occasions and these get disproportionately publicized on financial media, but piggybacking their moves can beat the broader market on average. That’s why we are going to go over recent hedge fund activity in Azul S.A. (NYSE:AZUL).

Hedge fund interest in Azul S.A. (NYSE:AZUL) shares was flat at the end of last quarter. This is usually a negative indicator. The level and the change in hedge fund popularity aren’t the only variables you need to analyze to decipher hedge funds’ perspectives. A stock may witness a boost in popularity but it may still be less popular than similarly priced stocks. That’s why at the end of this article we will examine companies such as NovoCure Limited (NASDAQ:NVCR), Cantel Medical Corp. (NYSE:CMD), and AMC Networks Inc (NASDAQ:AMCX) to gather more data points.

To the average investor there are a large number of tools shareholders use to grade publicly traded companies. A duo of the less known tools are hedge fund and insider trading indicators. Our experts have shown that, historically, those who follow the top picks of the top fund managers can outperform their index-focused peers by a superb margin (see the details here).

At the end of the fourth quarter, a total of 11 of the hedge funds tracked by Insider Monkey held long positions in this stock, a change of 0% from one quarter earlier. By comparison, 15 hedge funds held shares or bullish call options in AZUL a year ago. With hedge funds’ positions undergoing their usual ebb and flow, there exists a few key hedge fund managers who were upping their holdings meaningfully (or already accumulated large positions). 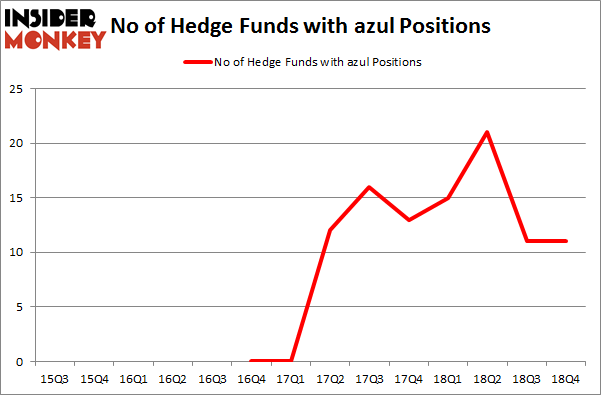 Among these funds, Oaktree Capital Management held the most valuable stake in Azul S.A. (NYSE:AZUL), which was worth $39.9 million at the end of the third quarter. On the second spot was ZWEIG DIMENNA PARTNERS which amassed $39.5 million worth of shares. Moreover, ThornTree Capital Partners, Citadel Investment Group, and Contrarian Capital were also bullish on Azul S.A. (NYSE:AZUL), allocating a large percentage of their portfolios to this stock.

Since Azul S.A. (NYSE:AZUL) has faced a decline in interest from the smart money, logic holds that there lies a certain “tier” of funds that elected to cut their full holdings last quarter. It’s worth mentioning that Julian Robertson’s Tiger Management dropped the biggest stake of the 700 funds monitored by Insider Monkey, worth about $2.2 million in stock. Matthew Halbower’s fund, Pentwater Capital Management, also said goodbye to its stock, about $0.7 million worth. These moves are important to note, as aggregate hedge fund interest stayed the same (this is a bearish signal in our experience).

As you can see these stocks had an average of 17.5 hedge funds with bullish positions and the average amount invested in these stocks was $258 million. That figure was $145 million in AZUL’s case. BankUnited, Inc. (NYSE:BKU) is the most popular stock in this table. On the other hand Cantel Medical Corp. (NYSE:CMD) is the least popular one with only 13 bullish hedge fund positions. Compared to these stocks Azul S.A. (NYSE:AZUL) is even less popular than CMD. Hedge funds dodged a bullet by taking a bearish stance towards AZUL. Our calculations showed that the top 15 most popular hedge fund stocks returned 24.2% through April 22nd and outperformed the S&P 500 ETF (SPY) by more than 7 percentage points. Unfortunately AZUL wasn’t nearly as popular as these 15 stock (hedge fund sentiment was very bearish); AZUL investors were disappointed as the stock returned -6.9% and underperformed the market. If you are interested in investing in large cap stocks with huge upside potential, you should check out the top 15 most popular stocks) among hedge funds as 13 of these stocks already outperformed the market this year.