The elite funds run by legendary investors such as Dan Loeb and David Tepper make hundreds of millions of dollars for themselves and their investors by spending enormous resources doing research on small cap stocks that big investment banks don’t follow. Because of their pay structures, they have strong incentive to do the research necessary to beat the market. That’s why we pay close attention to what they think in small cap stocks. In this article, we take a closer look at Azul S.A. (NYSE:AZUL) from the perspective of those elite funds.

Azul S.A. (NYSE:AZUL) has seen a decrease in enthusiasm from smart money in recent months. Our calculations also showed that AZUL isn’t among the 30 most popular stocks among hedge funds.

We’re going to take a glance at the new hedge fund action regarding Azul S.A. (NYSE:AZUL). 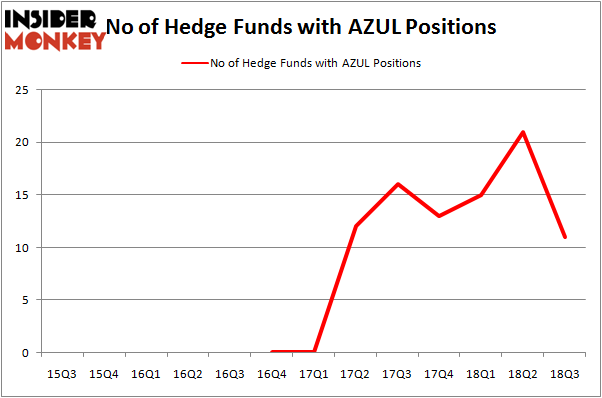 According to publicly available hedge fund and institutional investor holdings data compiled by Insider Monkey, Howard Marks’s Oaktree Capital Management has the number one position in Azul S.A. (NYSE:AZUL), worth close to $33.3 million, comprising 0.4% of its total 13F portfolio. The second largest stake is held by Mark Moore of ThornTree Capital Partners, with a $15.4 million position; 4.5% of its 13F portfolio is allocated to the stock. Some other professional money managers that hold long positions encompass Jon Bauer’s Contrarian Capital, Ken Griffin’s Citadel Investment Group and Joe DiMenna’s ZWEIG DIMENNA PARTNERS.

Since Azul S.A. (NYSE:AZUL) has witnessed bearish sentiment from the entirety of the hedge funds we track, we can see that there is a sect of money managers who sold off their positions entirely in the third quarter. Intriguingly, Robert Polak’s Anchor Bolt Capital sold off the biggest position of the 700 funds followed by Insider Monkey, worth an estimated $12.2 million in stock. David Rodriguez-Fraile’s fund, BlueMar Capital Management, also dropped its stock, about $3.6 million worth. These bearish behaviors are important to note, as total hedge fund interest dropped by 10 funds in the third quarter.

As you can see these stocks had an average of 11 hedge funds with bullish positions and the average amount invested in these stocks was $88 million. That figure was $89 million in AZUL’s case. Wingstop Inc (NASDAQ:WING) is the most popular stock in this table. On the other hand Uxin Limited (NASDAQ:UXIN) is the least popular one with only 5 bullish hedge fund positions. Azul S.A. (NYSE:AZUL) is not the least popular stock in this group but hedge fund interest is still below average. This is a slightly negative signal and we’d rather spend our time researching stocks that hedge funds are piling on. In this regard WING might be a better candidate to consider a long position.