We are still in an overall bull market and many stocks that smart money investors were piling into surged through the end of November. Among them, Facebook and Microsoft ranked among the top 3 picks and these stocks gained 54% and 51% respectively. Hedge funds’ top 3 stock picks returned 41.7% this year and beat the S&P 500 ETFs by 14 percentage points. Investing in index funds guarantees you average returns, not superior returns. We are looking to generate superior returns for our readers. That’s why we believe it isn’t a waste of time to check out hedge fund sentiment before you invest in a stock like Axis Capital Holdings Limited (NYSE:AXS).

Is Axis Capital Holdings Limited (NYSE:AXS) the right investment to pursue these days? Money managers are taking a bullish view. The number of long hedge fund positions went up by 1 in recent months. Our calculations also showed that AXS isn’t among the 30 most popular stocks among hedge funds (click for Q3 rankings and see the video below for Q2 rankings). AXS was in 28 hedge funds’ portfolios at the end of the third quarter of 2019. There were 27 hedge funds in our database with AXS holdings at the end of the previous quarter.

Unlike the largest US hedge funds that are convinced Dow will soar past 40,000 or the world’s most bearish hedge fund that’s more convinced than ever that a crash is coming, our long-short investment strategy doesn’t rely on bull or bear markets to deliver double digit returns. We only rely on the best performing hedge funds‘ buy/sell signals. We’re going to review the latest hedge fund action surrounding Axis Capital Holdings Limited (NYSE:AXS).

At the end of the third quarter, a total of 28 of the hedge funds tracked by Insider Monkey were long this stock, a change of 4% from the second quarter of 2019. On the other hand, there were a total of 21 hedge funds with a bullish position in AXS a year ago. With hedge funds’ positions undergoing their usual ebb and flow, there exists a few key hedge fund managers who were increasing their stakes substantially (or already accumulated large positions). 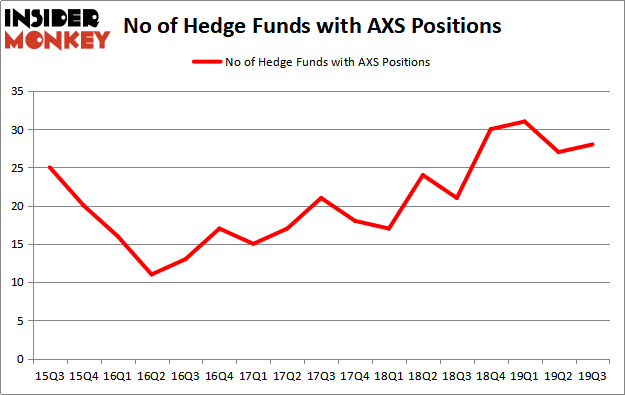 The largest stake in Axis Capital Holdings Limited (NYSE:AXS) was held by Pzena Investment Management, which reported holding $293.9 million worth of stock at the end of September. It was followed by Renaissance Technologies with a $180.6 million position. Other investors bullish on the company included AQR Capital Management, Samlyn Capital, and GLG Partners. In terms of the portfolio weights assigned to each position Strycker View Capital allocated the biggest weight to Axis Capital Holdings Limited (NYSE:AXS), around 5.93% of its portfolio. BlueMar Capital Management is also relatively very bullish on the stock, designating 3.53 percent of its 13F equity portfolio to AXS.

With a general bullishness amongst the heavyweights, some big names have been driving this bullishness. Winton Capital Management, managed by David Harding, created the biggest position in Axis Capital Holdings Limited (NYSE:AXS). Winton Capital Management had $17.3 million invested in the company at the end of the quarter. Usman Waheed’s Strycker View Capital also made a $14.9 million investment in the stock during the quarter. The other funds with brand new AXS positions are Matthew Hulsizer’s PEAK6 Capital Management, Mike Vranos’s Ellington, and Paul Marshall and Ian Wace’s Marshall Wace.

Let’s also examine hedge fund activity in other stocks – not necessarily in the same industry as Axis Capital Holdings Limited (NYSE:AXS) but similarly valued. We will take a look at Sarepta Therapeutics Inc (NASDAQ:SRPT), World Wrestling Entertainment, Inc. (NYSE:WWE), The Howard Hughes Corporation (NYSE:HHC), and IAA, Inc. (NYSE:IAA). All of these stocks’ market caps are closest to AXS’s market cap.

As you can see these stocks had an average of 30.75 hedge funds with bullish positions and the average amount invested in these stocks was $823 million. That figure was $893 million in AXS’s case. World Wrestling Entertainment, Inc. (NYSE:WWE) is the most popular stock in this table. On the other hand The Howard Hughes Corporation (NYSE:HHC) is the least popular one with only 25 bullish hedge fund positions. Axis Capital Holdings Limited (NYSE:AXS) is not the least popular stock in this group but hedge fund interest is still below average. This is a slightly negative signal and we’d rather spend our time researching stocks that hedge funds are piling on. Our calculations showed that top 20 most popular stocks among hedge funds returned 37.4% in 2019 through the end of November and outperformed the S&P 500 ETF (SPY) by 9.9 percentage points. Unfortunately AXS wasn’t nearly as popular as these 20 stocks (hedge fund sentiment was quite bearish); AXS investors were disappointed as the stock returned -10.8% during the first two months of the fourth quarter and underperformed the market. If you are interested in investing in large cap stocks with huge upside potential, you should check out the top 20 most popular stocks among hedge funds as 70 percent of these stocks already outperformed the market in Q4.