Is Avantor, Inc. (AVTR) A Good Stock To Buy?

Does Avantor, Inc. (NYSE:AVTR) represent a good buying opportunity at the moment? Let’s quickly check the hedge fund interest towards the company. Hedge fund firms constantly search out bright intellectuals and highly-experienced employees and throw away millions of dollars on satellite photos and other research activities, so it is no wonder why they tend to generate millions in profits each year. It is also true that some hedge fund players fail inconceivably on some occasions, but net net their stock picks have been generating superior risk-adjusted returns on average over the years.

Avantor, Inc. (NYSE:AVTR) was in 26 hedge funds’ portfolios at the end of the third quarter of 2019. AVTR shareholders have witnessed a decrease in support from the world’s most elite money managers lately. There were 30 hedge funds in our database with AVTR holdings at the end of the previous quarter. Our calculations also showed that AVTR isn’t among the 30 most popular stocks among hedge funds (click for Q3 rankings and see the video below for Q2 rankings).

To most stock holders, hedge funds are viewed as worthless, old investment tools of yesteryear. While there are over 8000 funds with their doors open at the moment, Our experts hone in on the masters of this group, around 750 funds. These hedge fund managers manage the lion’s share of the smart money’s total asset base, and by paying attention to their matchless stock picks, Insider Monkey has identified a number of investment strategies that have historically outstripped the S&P 500 index. Insider Monkey’s flagship short hedge fund strategy defeated the S&P 500 short ETFs by around 20 percentage points a year since its inception in May 2014. Our portfolio of short stocks lost 27.8% since February 2017 (through November 21st) even though the market was up more than 39% during the same period. We just shared a list of 7 short targets in our latest quarterly update .

Unlike the largest US hedge funds that are convinced Dow will soar past 40,000 or the world’s most bearish hedge fund that’s more convinced than ever that a crash is coming, our long-short investment strategy doesn’t rely on bull or bear markets to deliver double digit returns. We only rely on the best performing hedge funds‘ buy/sell signals. We’re going to take a look at the new hedge fund action regarding Avantor, Inc. (NYSE:AVTR).

What have hedge funds been doing with Avantor, Inc. (NYSE:AVTR)? 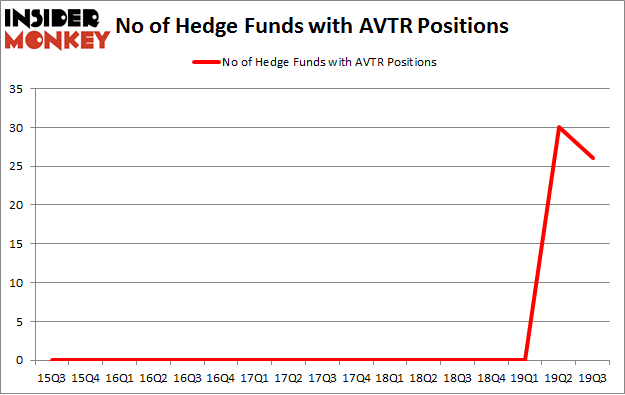 According to publicly available hedge fund and institutional investor holdings data compiled by Insider Monkey, Viking Global, managed by Andreas Halvorsen, holds the number one position in Avantor, Inc. (NYSE:AVTR). Viking Global has a $115.7 million position in the stock, comprising 0.6% of its 13F portfolio. On Viking Global’s heels is D1 Capital Partners, managed by Daniel Sundheim, which holds a $97.8 million position; 1.4% of its 13F portfolio is allocated to the stock. Some other hedge funds and institutional investors that hold long positions comprise Ken Griffin’s Citadel Investment Group, Doug Silverman and Alexander Klabin’s Senator Investment Group and Jonathan Auerbach’s Hound Partners. In terms of the portfolio weights assigned to each position Adi Capital Management allocated the biggest weight to Avantor, Inc. (NYSE:AVTR), around 8.97% of its portfolio. Red Cedar Management is also relatively very bullish on the stock, dishing out 4.74 percent of its 13F equity portfolio to AVTR.

Seeing as Avantor, Inc. (NYSE:AVTR) has experienced falling interest from hedge fund managers, logic holds that there is a sect of money managers that slashed their positions entirely heading into Q4. It’s worth mentioning that John Armitage’s Egerton Capital Limited said goodbye to the biggest position of the 750 funds tracked by Insider Monkey, valued at an estimated $83.8 million in stock. Brian Ashford-Russell and Tim Woolley’s fund, Polar Capital, also said goodbye to its stock, about $43.2 million worth. These moves are important to note, as total hedge fund interest fell by 4 funds heading into Q4.

As you can see these stocks had an average of 18.75 hedge funds with bullish positions and the average amount invested in these stocks was $444 million. That figure was $524 million in AVTR’s case. Dropbox, Inc. (NASDAQ:DBX) is the most popular stock in this table. On the other hand AEGON N.V. (NYSE:AEG) is the least popular one with only 6 bullish hedge fund positions. Avantor, Inc. (NYSE:AVTR) is not the most popular stock in this group but hedge fund interest is still above average. Our calculations showed that top 20 most popular stocks among hedge funds returned 37.4% in 2019 through the end of November and outperformed the S&P 500 ETF (SPY) by 9.9 percentage points. Hedge funds were also right about betting on AVTR as the stock returned 16.5% during the fourth quarter (through the end of November) and outperformed the market. Hedge funds were rewarded for their relative bullishness.

Hedge Funds Are Betting On Apollo Global Management, Inc. (APO)
Monthly Newsletter Strategy
Download a free copy of our newsletter and see the details inside!
Hedge Fund Resource Center
Related News
Hedge Funds Have Never Been This Bullish On Avantor, Inc. (AVTR) 20 Countries With Highest Military Spending In The World 10 Countries That Smoke The Least 10 Highest Paid CEOs in the World in 2019
Billionaire Hedge Funds