Is Applied Industrial Technologies, Inc. (NYSE:AIT) worth your attention right now? Investors who are in the know are in a pessimistic mood. The number of long hedge fund bets decreased by 4 recently. Our calculations also showed that ait isn’t among the 30 most popular stocks among hedge funds.

Today there are many methods stock traders put to use to appraise publicly traded companies. Some of the less utilized methods are hedge fund and insider trading interest. We have shown that, historically, those who follow the top picks of the best investment managers can outperform their index-focused peers by a very impressive amount (see the details here).

What have hedge funds been doing with Applied Industrial Technologies, Inc. (NYSE:AIT)? 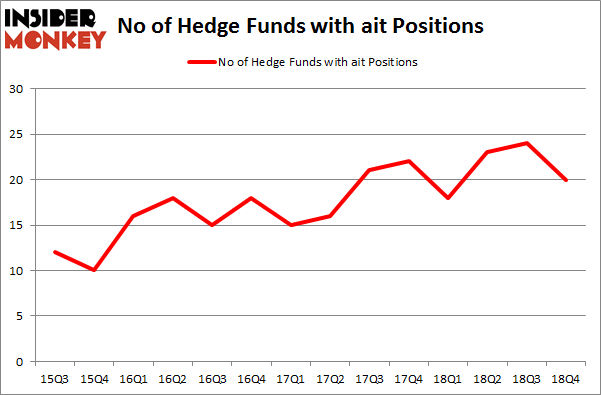 More specifically, Adage Capital Management was the largest shareholder of Applied Industrial Technologies, Inc. (NYSE:AIT), with a stake worth $31.3 million reported as of the end of December. Trailing Adage Capital Management was Royce & Associates, which amassed a stake valued at $11.7 million. Carlson Capital, Millennium Management, and Renaissance Technologies were also very fond of the stock, giving the stock large weights in their portfolios.

Seeing as Applied Industrial Technologies, Inc. (NYSE:AIT) has witnessed declining sentiment from the entirety of the hedge funds we track, we can see that there exists a select few fund managers who sold off their positions entirely by the end of the third quarter. At the top of the heap, Robert Polak’s Anchor Bolt Capital dumped the largest position of the “upper crust” of funds followed by Insider Monkey, comprising close to $8.2 million in stock, and Brandon Haley’s Holocene Advisors was right behind this move, as the fund sold off about $0.6 million worth. These moves are intriguing to say the least, as aggregate hedge fund interest was cut by 4 funds by the end of the third quarter.

As you can see these stocks had an average of 13.75 hedge funds with bullish positions and the average amount invested in these stocks was $236 million. That figure was $102 million in AIT’s case. Evertec Inc (NYSE:EVTC) is the most popular stock in this table. On the other hand Sogou Inc. (NYSE:SOGO) is the least popular one with only 6 bullish hedge fund positions. Applied Industrial Technologies, Inc. (NYSE:AIT) is not the most popular stock in this group but hedge fund interest is still above average. Our calculations showed that top 15 most popular stocks) among hedge funds returned 24.2% through April 22nd and outperformed the S&P 500 ETF (SPY) by more than 7 percentage points. Hedge funds were also right about betting on AIT, though not to the same extent, as the stock returned 16.7% and outperformed the market as well.