After several tireless days we have finished crunching the numbers from nearly 750 13F filings issued by the elite hedge funds and other investment firms that we track at Insider Monkey, which disclosed those firms’ equity portfolios as of December 31. The results of that effort will be put on display in this article, as we share valuable insight into the smart money sentiment towards Amerisafe, Inc. (NASDAQ:AMSF).

Hedge fund interest in Amerisafe, Inc. (NASDAQ:AMSF) shares was flat at the end of last quarter. This is usually a negative indicator. The level and the change in hedge fund popularity aren’t the only variables you need to analyze to decipher hedge funds’ perspectives. A stock may witness a boost in popularity but it may still be less popular than similarly priced stocks. That’s why at the end of this article we will examine companies such as Bloom Energy Corporation (NYSE:BE), Iovance Biotherapeutics, Inc. (NASDAQ:IOVA), and Electronics For Imaging, Inc. (NASDAQ:EFII) to gather more data points.

What have hedge funds been doing with Amerisafe, Inc. (NASDAQ:AMSF)? 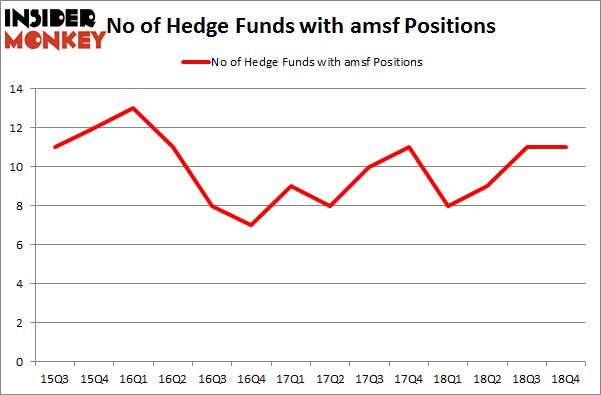 More specifically, Citadel Investment Group was the largest shareholder of Amerisafe, Inc. (NASDAQ:AMSF), with a stake worth $4.8 million reported as of the end of December. Trailing Citadel Investment Group was Two Sigma Advisors, which amassed a stake valued at $2.1 million. Fisher Asset Management, Renaissance Technologies, and Marshall Wace LLP were also very fond of the stock, giving the stock large weights in their portfolios.

Due to the fact that Amerisafe, Inc. (NASDAQ:AMSF) has faced declining sentiment from the aggregate hedge fund industry, logic holds that there is a sect of money managers that elected to cut their entire stakes in the third quarter. Interestingly, Noam Gottesman’s GLG Partners dropped the biggest position of the “upper crust” of funds tracked by Insider Monkey, totaling an estimated $0.8 million in stock, and Israel Englander’s Millennium Management was right behind this move, as the fund said goodbye to about $0.4 million worth. These bearish behaviors are intriguing to say the least, as aggregate hedge fund interest stayed the same (this is a bearish signal in our experience).

As you can see these stocks had an average of 13.5 hedge funds with bullish positions and the average amount invested in these stocks was $187 million. That figure was $14 million in AMSF’s case. Iovance Biotherapeutics, Inc. (NASDAQ:IOVA) is the most popular stock in this table. On the other hand Bloom Energy Corporation (NYSE:BE) is the least popular one with only 8 bullish hedge fund positions. Amerisafe, Inc. (NASDAQ:AMSF) is not the least popular stock in this group but hedge fund interest is still below average. This is a slightly negative signal and we’d rather spend our time researching stocks that hedge funds are piling on. Our calculations showed that top 15 most popular stocks) among hedge funds returned 24.2% through April 22nd and outperformed the S&P 500 ETF (SPY) by more than 7 percentage points. Unfortunately AMSF wasn’t nearly as popular as these 15 stock (hedge fund sentiment was quite bearish); AMSF investors were disappointed as the stock returned 3.2% and underperformed the market. If you are interested in investing in large cap stocks with huge upside potential, you should check out the top 15 most popular stocks) among hedge funds as 13 of these stocks already outperformed the market this year.