Is American Software, Inc. (AMSWA) A Good Stock To Buy?

American Software, Inc. (NASDAQ:AMSWA) has seen a decrease in activity from the world’s largest hedge funds in recent months. Our calculations also showed that AMSWA isn’t among the 30 most popular stocks among hedge funds (see the video below). 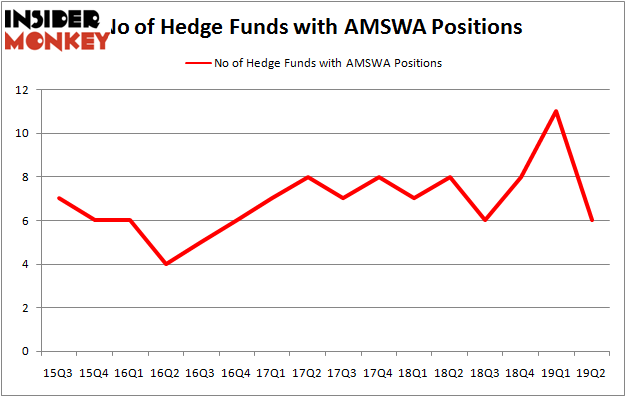 Unlike other investors who track every movement of the 25 largest hedge funds, our long-short investment strategy relies on hedge fund buy/sell signals given by the 100 best performing hedge funds. We’re going to take a look at the new hedge fund action encompassing American Software, Inc. (NASDAQ:AMSWA).

What does smart money think about American Software, Inc. (NASDAQ:AMSWA)?

Heading into the third quarter of 2019, a total of 6 of the hedge funds tracked by Insider Monkey were bullish on this stock, a change of -45% from one quarter earlier. Below, you can check out the change in hedge fund sentiment towards AMSWA over the last 16 quarters. So, let’s see which hedge funds were among the top holders of the stock and which hedge funds were making big moves.

Of the funds tracked by Insider Monkey, Renaissance Technologies, holds the largest position in American Software, Inc. (NASDAQ:AMSWA). Renaissance Technologies has a $26.1 million position in the stock, comprising less than 0.1%% of its 13F portfolio. On Renaissance Technologies’s heels is Cloverdale Capital Management, managed by C. Jonathan Gattman, which holds a $14.2 million position; 9.8% of its 13F portfolio is allocated to the company. Remaining hedge funds and institutional investors with similar optimism include Peter Rathjens, Bruce Clarke and John Campbell’s Arrowstreet Capital, Chuck Royce’s Royce & Associates and John Overdeck and David Siegel’s Two Sigma Advisors.

Since American Software, Inc. (NASDAQ:AMSWA) has witnessed declining sentiment from hedge fund managers, it’s safe to say that there was a specific group of hedgies who were dropping their entire stakes heading into Q3. It’s worth mentioning that Paul Marshall and Ian Wace’s Marshall Wace LLP dropped the biggest position of the 750 funds monitored by Insider Monkey, worth about $0.2 million in stock. Peter Algert and Kevin Coldiron’s fund, Algert Coldiron Investors, also said goodbye to its stock, about $0.1 million worth. These moves are intriguing to say the least, as total hedge fund interest fell by 5 funds heading into Q3.

As you can see these stocks had an average of 11.25 hedge funds with bullish positions and the average amount invested in these stocks was $58 million. That figure was $45 million in AMSWA’s case. Carrols Restaurant Group, Inc. (NASDAQ:TAST) is the most popular stock in this table. On the other hand Tuniu Corporation (NASDAQ:TOUR) is the least popular one with only 4 bullish hedge fund positions. American Software, Inc. (NASDAQ:AMSWA) is not the least popular stock in this group but hedge fund interest is still below average. Our calculations showed that top 20 most popular stocks among hedge funds returned 24.4% in 2019 through September 30th and outperformed the S&P 500 ETF (SPY) by 4 percentage points. A small number of hedge funds were also right about betting on AMSWA as the stock returned 15.1% during the same time frame and outperformed the market by an even larger margin.