Is Allegiance Bancshares, Inc. (ABTX) A Good Stock To Buy?

It was a rough fourth quarter for many hedge funds, which were naturally unable to overcome the big dip in the broad market, as the S&P 500 fell by about 4.8% during 2018 and average hedge fund losing about 1%. The Russell 2000, composed of smaller companies, performed even worse, trailing the S&P by more than 6 percentage points, as investors fled less-known quantities for safe havens. This was the case with hedge funds, who we heard were pulling money from the market amid the volatility, which included money from small-cap stocks, which they invest in at a higher rate than other investors. This action contributed to the greater decline in these stocks during the tumultuous period. We will study how this market volatility affected their sentiment towards Allegiance Bancshares, Inc. (NASDAQ:ABTX) during the quarter below.

Allegiance Bancshares, Inc. (NASDAQ:ABTX) has seen a decrease in hedge fund interest recently. Our calculations also showed that ABTX isn’t among the 30 most popular stocks among hedge funds.

In today’s marketplace there are a large number of gauges stock market investors put to use to value their holdings. A pair of the most useful gauges are hedge fund and insider trading interest. Our researchers have shown that, historically, those who follow the top picks of the best investment managers can trounce the S&P 500 by a significant margin (see the details here).

What have hedge funds been doing with Allegiance Bancshares, Inc. (NASDAQ:ABTX)?

Heading into the first quarter of 2019, a total of 6 of the hedge funds tracked by Insider Monkey were long this stock, a change of -14% from the second quarter of 2018. Below, you can check out the change in hedge fund sentiment towards ABTX over the last 14 quarters. With the smart money’s capital changing hands, there exists a few notable hedge fund managers who were increasing their stakes meaningfully (or already accumulated large positions). 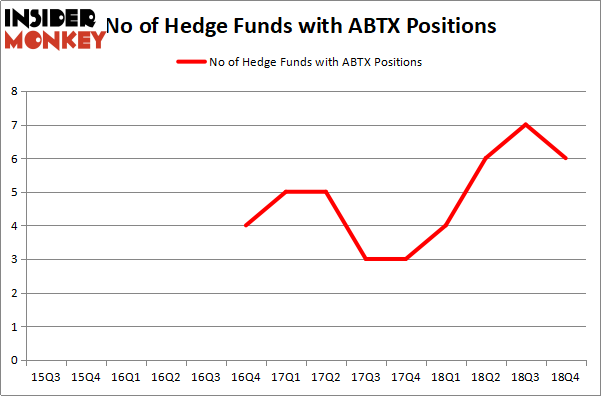 The largest stake in Allegiance Bancshares, Inc. (NASDAQ:ABTX) was held by Royce & Associates, which reported holding $7.4 million worth of stock at the end of December. It was followed by Gillson Capital with a $1.6 million position. Other investors bullish on the company included Millennium Management, Renaissance Technologies, and Citadel Investment Group.

Seeing as Allegiance Bancshares, Inc. (NASDAQ:ABTX) has experienced bearish sentiment from the aggregate hedge fund industry, we can see that there is a sect of money managers who were dropping their entire stakes by the end of the third quarter. Intriguingly, Ravi Chopra’s Azora Capital sold off the biggest stake of the “upper crust” of funds tracked by Insider Monkey, worth about $4.2 million in stock. Dmitry Balyasny’s fund, Balyasny Asset Management, also sold off its stock, about $0.7 million worth. These bearish behaviors are intriguing to say the least, as aggregate hedge fund interest fell by 1 funds by the end of the third quarter.

As you can see these stocks had an average of 15.5 hedge funds with bullish positions and the average amount invested in these stocks was $62 million. That figure was $12 million in ABTX’s case. Columbus McKinnon Corporation (NASDAQ:CMCO) is the most popular stock in this table. On the other hand Opus Bank (NASDAQ:OPB) is the least popular one with only 10 bullish hedge fund positions. Compared to these stocks Allegiance Bancshares, Inc. (NASDAQ:ABTX) is even less popular than OPB. Hedge funds dodged a bullet by taking a bearish stance towards ABTX. Our calculations showed that the top 15 most popular hedge fund stocks returned 24.2% through April 22nd and outperformed the S&P 500 ETF (SPY) by more than 7 percentage points. Unfortunately ABTX wasn’t nearly as popular as these 15 stock (hedge fund sentiment was very bearish); ABTX investors were disappointed as the stock returned 11% and underperformed the market. If you are interested in investing in large cap stocks with huge upside potential, you should check out the top 15 most popular stocks) among hedge funds as 13 of these stocks already outperformed the market this year.