Amid an overall bull market, many stocks that smart money investors were collectively bullish on surged through October 17th. Among them, Facebook and Microsoft ranked among the top 3 picks and these stocks gained 45% and 39% respectively. Our research shows that most of the stocks that smart money likes historically generate strong risk-adjusted returns. That’s why we weren’t surprised when hedge funds’ top 20 large-cap stock picks generated a return of 24.4% during the first 9 months of 2019 and outperformed the broader market benchmark by 4 percentage points. This is why following the smart money sentiment is a useful tool at identifying the next stock to invest in.

Aerie Pharmaceuticals Inc (NASDAQ:AERI) has seen a decrease in support from the world’s most elite money managers recently. AERI was in 18 hedge funds’ portfolios at the end of the second quarter of 2019. There were 23 hedge funds in our database with AERI holdings at the end of the previous quarter. Our calculations also showed that AERI isn’t among the 30 most popular stocks among hedge funds (see the video below).

In the eyes of most traders, hedge funds are perceived as slow, outdated investment tools of yesteryear. While there are over 8000 funds with their doors open at the moment, We hone in on the upper echelon of this group, approximately 750 funds. These money managers shepherd the lion’s share of the hedge fund industry’s total capital, and by keeping an eye on their finest picks, Insider Monkey has brought to light several investment strategies that have historically defeated the market. Insider Monkey’s flagship hedge fund strategy outrun the S&P 500 index by around 5 percentage points annually since its inception in May 2014. We were able to generate large returns even by identifying short candidates. Our portfolio of short stocks lost 25.7% since February 2017 (through September 30th) even though the market was up more than 33% during the same period. We just shared a list of 10 short targets in our latest quarterly update .

What does smart money think about Aerie Pharmaceuticals Inc (NASDAQ:AERI)?

At Q2’s end, a total of 18 of the hedge funds tracked by Insider Monkey were bullish on this stock, a change of -22% from one quarter earlier. The graph below displays the number of hedge funds with bullish position in AERI over the last 16 quarters. With hedge funds’ positions undergoing their usual ebb and flow, there exists a few notable hedge fund managers who were upping their stakes significantly (or already accumulated large positions). 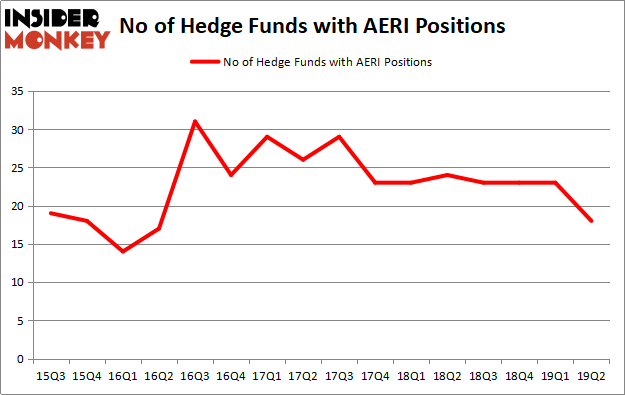 Due to the fact that Aerie Pharmaceuticals Inc (NASDAQ:AERI) has witnessed falling interest from the smart money, logic holds that there lies a certain “tier” of funds that slashed their entire stakes by the end of the second quarter. At the top of the heap, Mariko Gordon’s Daruma Asset Management sold off the biggest position of the 750 funds tracked by Insider Monkey, totaling about $35.5 million in stock, and David Rosen’s Rubric Capital Management was right behind this move, as the fund cut about $7.8 million worth. These transactions are intriguing to say the least, as total hedge fund interest was cut by 5 funds by the end of the second quarter.

As you can see these stocks had an average of 15 hedge funds with bullish positions and the average amount invested in these stocks was $106 million. That figure was $329 million in AERI’s case. K12 Inc. (NYSE:LRN) is the most popular stock in this table. On the other hand Amerisafe, Inc. (NASDAQ:AMSF) is the least popular one with only 12 bullish hedge fund positions. Aerie Pharmaceuticals Inc (NASDAQ:AERI) is not the most popular stock in this group but hedge fund interest is still above average. This is a slightly positive signal but we’d rather spend our time researching stocks that hedge funds are piling on. Our calculations showed that top 20 most popular stocks among hedge funds returned 24.4% in 2019 through September 30th and outperformed the S&P 500 ETF (SPY) by 4 percentage points. Unfortunately AERI wasn’t nearly as popular as these 20 stocks and hedge funds that were betting on AERI were disappointed as the stock returned -35% during the third quarter and underperformed the market. If you are interested in investing in large cap stocks with huge upside potential, you should check out the top 20 most popular stocks among hedge funds as many of these stocks already outperformed the market so far this year.